Are Western European countries more ethnically heterogenous than 100 years ago?

Many people claim that Western European countries get more and more ethnically diverse, i.e, that Western society is getting more and more heterogenous with regard to ethnic groups. According to Wikipedia, for instance, in Germany live 81% "ethnic Germans", and in Austria 81% "ethnic Austrians" (note that I'm just quoting the term used on Wikipedia, not making one up myself).

That means that roughly 1 out of 5 does not consider herself or is not considered as part of this respective group. For me, it's not hard to imagine that this number has increased over the past 40 years or so.

Two hundred years ago, travelling from one end of Europe to the other took weeks or months. Moving that far was more or less inconceivable. If you did move that far it meant that you almost certainly would never see your family and friends again. It was a big step done by very few people.

Today you can fly anywhere in the world in a day. Moving to the other side of the world still means you can go back home to mom and pop for Christmas. Fleeing to another continent to escape oppression, or just moving somewhere to get a better job, is now a realistic option.

In my genealogy research it's clear that most people a 100 years ago never moved more than a couple of parishes away. Some move to the other end of the county, it was very unusual that people move to or from the mainland (see statistics from a completely different parish below).

Today people move around the country in search for a better job or education. None of my siblings live in the county we grew up, two of us have moved from Sweden. When I lived in Paris only two of my friends were bona fide Parisians.

So we don't have to even go into the minefield of "ethnicity" to conclude that the world is more heterogeneous now than before. It's completely obvious that it is, and the reason is simply that communication now is so much faster and easier than before.

Now finding statistics on this is difficult. This is partly because there is migration of many different kinds, like worker migration, or mass migration to avoid war and famine. But we can take a look at just single countries that have statistics available and see. 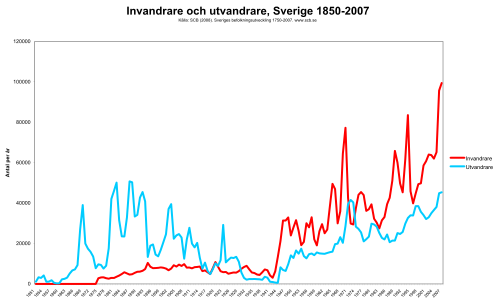 Here we can see that Sweden starts up with low immigration (although I suspect that the zero immigration seen in the beginning may be missing statistics). The statistics for emigration are unfortunately not available earlier, because once this statistics start, emigration to United states have already begun on a low level. But it's still so low that in parish emigration records of Angered parish (selected because it's the first one I found in the right timeframe) 1835 to 1844, of 921 people moving from the parish none is recorded as moving abroad, and only 5 move outside of the immediate region of Sweden.

This is the typical level of migration you will see pretty much anywhere in the world 200 years ago: Very low.

In Sweden migration really takes off in the 1860's when people emigrate in large numbers to avoid the poverty of poor and backwards Sweden. This emigration slowly declines as Sweden becomes richer. Most of the immigration increase seen are people returning back. In between the wars migration goes down.

But looking after the second world war, both immigration and emigration skyrocket (relatively speaking). As a result Sweden now has 125,000 people born in Iraq living in Sweden (over 1 percent of the population), as well as 63,000 from Iran, 40,000 from Somalia and 15,000 from Vietnam to just mention a few of the foreign nationalities.

The timeframe as well as the countries people move from and to will differ from country to country. But you will see that there is absolutely no doubt about the fact that society in general today is much more heterogeneous.

Not the answer you're looking for? Browse other questions tagged ethnicity or ask your own question.