Were the animals used for gladiatorial combat in Rome trained?

Were the animals used for gladiatorial combat in Rome 100% wild, or were they trained in any way (either for entertainment purposes like today's circus animals, or for fighting like fighting dogs are trained today).

If it matters, the ones I'm most interested in are big cats.

For the main question, "Were the animals used for gladiatorial combat in Rome trained?", the answer is a qualified yes. Big cats and bears were sometimes trained to be more ferocious and to attack humans, but they were mostly used (1) to kill unarmed or poorly-armed condemned people, (2) in hunts where they were killed by venatores (hunters usually armed with a spear, sword or arrows), or (3) in fights against bestiarii, a type of gladiator trained specifically for killing animals. Unfortunately, ancient sources often fail to give details but it appears that most gladiators typically fought other gladiators rather than animals.

For the other question on the use of trained animals other forms of entertainment, the answer is (a more definite) yes. Martial (d. circa. AD 103), Seneca (d. AD 65) and others cite a number of examples, including elephants throwing arrows and tightrope walking and a lion trained not to harm a hare. Pliny the Elder (d. AD 79) also notes that Mark Anthony (d. AD 30) had a chariot pulled by lions.

However, not least for financial and practical reasons, ancient sources generally imply that most of the thousands of animals that appeared in the arena were not trained. The examples mentioned in this answer should be considered as exceptional cases for special circumstances or highlights of the games where training was needed to ensure a successful performance.

1. Animals trained to fight and / or kill

One problem with ancient sources is that they often lack specifics on who fought or hunted the animals, and whether those animals were trained or not. For example, Livy (Bk 39, ch 22) wrote:

Then for ten days, with great magnificence, Marcus Fulvius gave the games which he had vowed during the Aetolian war [191 - 189 BC]. 2 Many actors too came from Greece to do him honour. Also a contest of athletes was then for the first time made a spectacle for the Romans and a hunt of lions and panthers was given,...

Cassius Dio related how Pompey (d. 48 BC) had eighteen elephants fight armed men; unfortunately, no details are given on who the armed men were or if the elephants were trained at all - maybe not, because the beasts seemed not to fight back and (very unusually) gained the pity of the audience.

Given (as Mark Olsen points out in a comment) the huge financial outlays and that disappointing the crowd would reflect badly on he who hosted the games, it's highly likely that animals in key performances were trained (i.e. to avoid the mistake that Pompey made). There is no mention, for example, of crowd dissatisfaction at the Flavian games when Cassius Dio reports that

There was a battle between cranes and also between four elephants

As cranes and elephants usually only become aggressive when threatened, it seems likely that they were trained, or at least provoked (but this is animals fighting animals rather than humans). On animal training, more helpful is this from Novatianus:

A wild beast is trained with gentle care so that it will, in turn, serve to punish a man and perform with greater fury before spectators’ eyes. A trained animal is given instructions; it would have perhaps been less ferocious, if its yet more cruel master had not trained it to act ferociously.

There are even cases of lions being trained to eat men. One such incident greatly displeased the emperors Claudius (d. AD 54) (see further below) and Marcus Aurelius (d. AD 180):

Even ferocious beasts (e.g. lions and leopards) had to be specially trained, and probably starved, to become ‘man-eaters’. Dio says that the unsqueamish Claudius enjoyed watching humans killed by humans or torn apart (analoumenoi) by animals, but he put to death a lion ‘that had been trained to eat (esthiein) men and therefore greatly pleased the crowd, claiming that it was not fitting for Romans to gaze on such a sight’

However, there is also evidence that this training didn't always work:

Even trained beasts were not always efficient or reliable. Although trainers provoked them with fire and whips, and Christians, as instructed, invited them by gestures, disoriented beasts sometimes might not attack the victims, or they might turn on the staff of the arena.

In a footnote, Kyle cites examples (from Martial and Plutarch) of lions turning on their keepers rather than the intended victims. Also,

the record of the last animal show in AD 281 documents that 100 maned lions were slaughtered at the doors of their cages because they refused to leave.

There's also this interesting piece on Nero and a trained lion, not a case of actual combat but rather a planned one which Nero seems to have backed out of:

According to Suetonius, Ner. 53, Nero planned to pretend to be Hercules: he had a lion trained so that he could kill it in the arena with a club or by strangling it.

2. Those who fought or hunted the animals

On the men who fought animals, the bestiarii were originally simply poorly-armed prisoners sent in to the arena with the expectation that they would be killed by animals such as lions and bears, and these thus cannot be regarded as gladiators. However, some emerged as skilled, specialised animal-fighters and the emperor Domitian (d. AD 96) established the Ludus Matutinus, specifically for training bestiarii to fight animals. One famous bestiarius was Carpophorus, mentioned by Martial in On the Public Shows of Domitian 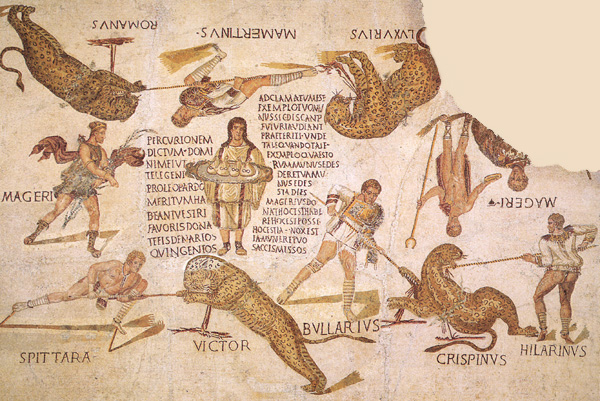 "In this mosaic, a venatio is being carried out under the aegis of Diana...and Dionysus, subduer of animals, who carries a staff with a crescent-shaped head.... The leopards, themselves, are encircled with garlands. The two divinities indicate the religious character of these games....The venatores, themselves, are a professional troupe of beast hunters, the Telegenii, who had contracted to perform, one of whom is fighting on short stilts." Image and text source

bears and lions, by good usage, will be brought to fawn upon their masters

Some people have the skill of reclaiming the fiercest of beasts; they will make a lion embrace his keeper, a tiger kiss him, and an elephant kneel to him.

Another example of a tamed lion comes from Martial:

Martial was impressed that lions in the arena were disciplined enough to snatch up hares, hold them in their jaws and then drop them unharmed.

In the exhibition of gladiators which was given by Germanicus, the elephants performed a sort of dance with their uncouth and irregular movements. It was a common thing to see them throw arrows with such strength, that the wind was unable to turn them from their course, to imitate among themselves the combats of the gladiators, and to frolic through the steps of the Pyrrhic dance. After this, too, they walked upon the tight-rope, and four of them would carry a litter in which lay a fifth, which represented a woman lying-in. They afterwards took their place; and so nicely did they manage their steps, that they did not so much as touch any of those who were drinking there.

subjected lions to the yoke, and was the first at Rome to harness them to his chariot...

and comments that it

...was a thing that surpassed even the most monstrous spectacles that were to be seen at that calamitous period.

Finally, the Historia Augusta records that the emperor Elagabalus (d. AD 222) had chariots drawn by camels, lions, tigers and stags.

Nicholas Lindberg, 'The Emperor and His Animals: the Acquisition of Exotic Beasts for Imperial Venationes'. In Greece & Rome, vol. 66 issue 2

It would depend on what type of animal it was and what type of entertainment it would be providing. A list of animals that took part in events can be found on this page.

Some animals such as zebras and ostriches were trained so that they could pull chariots. Other animals were taught to do tricks. With the massive variety of animals that participated in the many events some were used just for "hunts" or pitched against a gladiator in a fight to the death.

The more exotic animals that were used in "hunts" or pitched against a gladiator in a fight to the death were probally wild animals with no training.

Also, some gladiatorial events involved releasing herds of animals into the arena just so they could be slaughtered. There would have been no point to train these animals.

Not the answer you're looking for? Browse other questions tagged ancient-rome gladiators or ask your own question.

12
What was more expensive to lose in a gladiatorial fight: a gladiator or a rare animal?

5
What is the origin of Gladiatorial Games?
9
Who were the candidates in the consular elections for 80 BC in Rome?
5
Penalty for patricide in Ancient Rome
13
For how long were freed slaves in Ancient Rome supposed to wear a Pileus hat?
9
What jobs were available for migrants from the country to Rome?
13
Why were gravediggers, actors and former gladiators (but not slaves) banned from the Colosseum?
11
Why did post-Roman rulers abandon tax-paid army?
1
How were the Roman Triarii trained?