Why did Christopher Columbus think he had arrived near Japan?

This question came to our mind as a long discussion in chat between some users over ELU including me and we thought to post the question here. Wikipedia states he thought he had arrived Japan.

In his first journey, Columbus visited San Salvador in The Bahamas (which he was convinced was Japan), Cuba (which he thought was China) and Hispaniola (where he found gold).

That made us think, what made him think so? In the mean time, Cerberus came up with a helpful map of his journey, but we could not conclude anything from here. So does anybody have any information on this? We would really like to know.

The Map is uploaded separately for the users convenience. 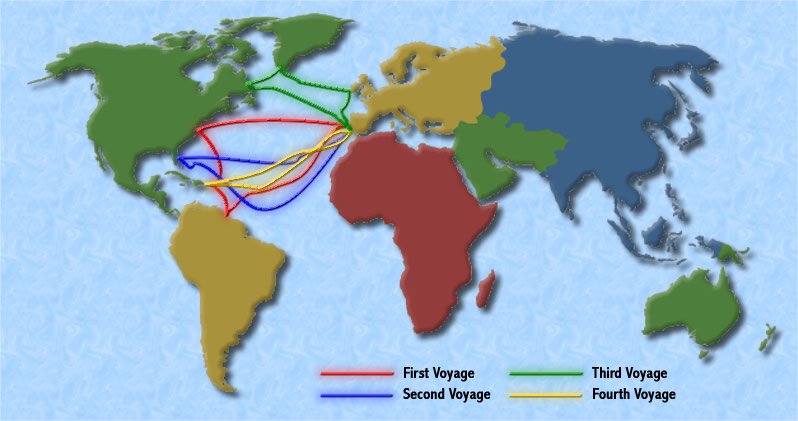 My understanding is that the question is not regarding why Columbus believed he had reached Asia at large, but why he mistook San Salvador for Japan. If so, the answer (lacking the relevant primary source material) appears to be as follows:

The Bahamas, which he believed were Japan, are north of Cuba, which he believed was China. (according to the question's source) At that time, the West was familiar mainly with the southern portion of China, which was more accessible to Europe by land via India and Indo-China, or by navigation along the southern coastlines. If so, Columbus, as well as most Europeans familiar somewhat with the Orient, would have understood that Japan was north of China, since Japan is indeed north of the southern coastal regions of China, those regions which the West at that time typically identified as China. 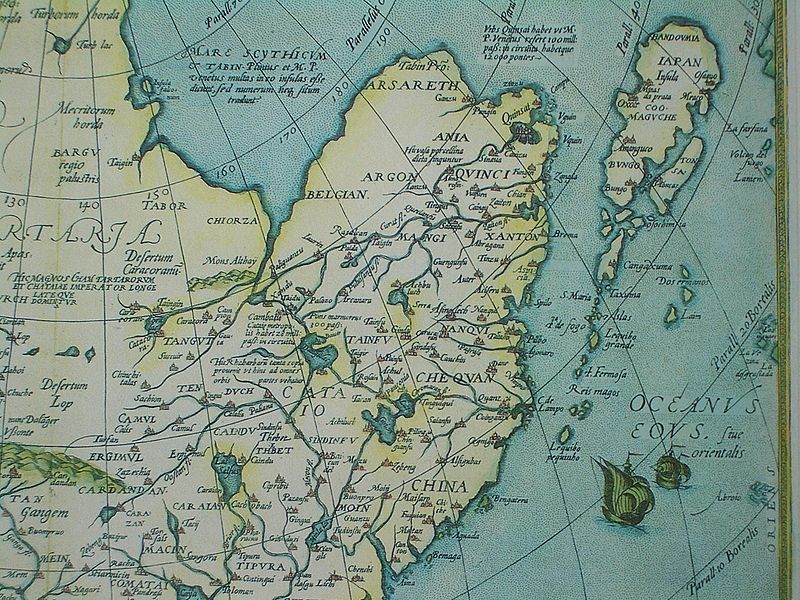 Map of Eastern China and Japan, published in 1570. Note the region label China, and the illustration of ships coming from the south in the East China Sea, towards Japan in the north and China to the south and west. In light of this map, Columbus's opinion regarding the Bahamas and Cuba is quite understandable.

We might also add that the Bahamas are a chain of islands, similar in that respect to what was presumably known regarding Japan, whereas in comparison, Cuba appears to be a large landmass, similar to what was known about China. 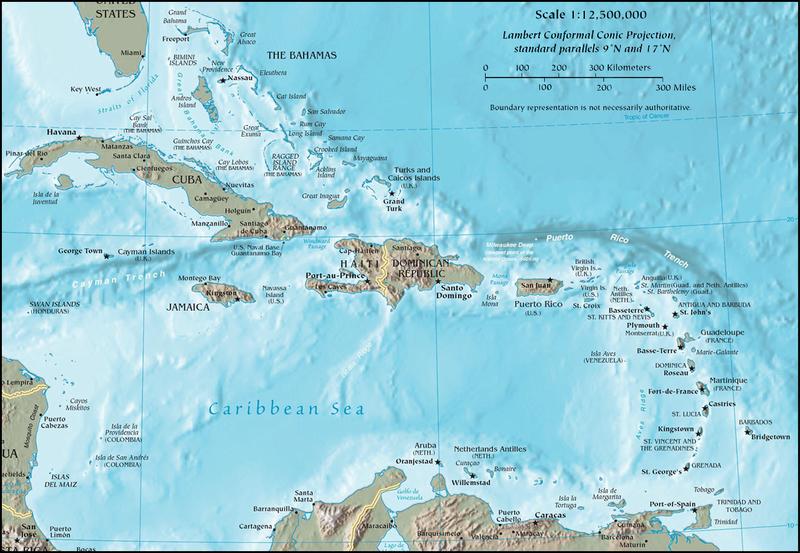 Contemporary Map of the West Indies, showing prominently Cuba and the Bahamas.

If so, it would be logical to conclude that if he were indeed in Asia, the more northern island he discovered, an island in the Bahamas, was Japan, and the land to the south, Cuba, was China.

If this is not the question, then my answer is superfluous, and LateralFractal's answer is excellent.

Christopher Columbus thought the world was spherical (like most educated people of his era) but he also thought the size of the Earth was small enough that a westward boat trip from Europe to Asia was achievable with existing ship building technology.

In this regard he differed from the more accurate size estimates of scholars in Isabella and Ferdinand's court. Sustained lobbying won out through - and so off he went.

Since he still believed the size of the Earth was small - when he bumped into land in the Americas obviously he would assert that the landfall was in Asia (India, Japan, China or somewhere) as:

These geographical fabrications are not new; the slabs of ice, rock and tundra that make up Greenland was named "Greenland" by Erik the Red to encourage settlement.

Columbus' original goal in his voyage was to reach Asia, to visit Japan and have some of its riches (spices, gold ...)

I guess Columbus thought the world map looked like this. (America doesn't exist.) 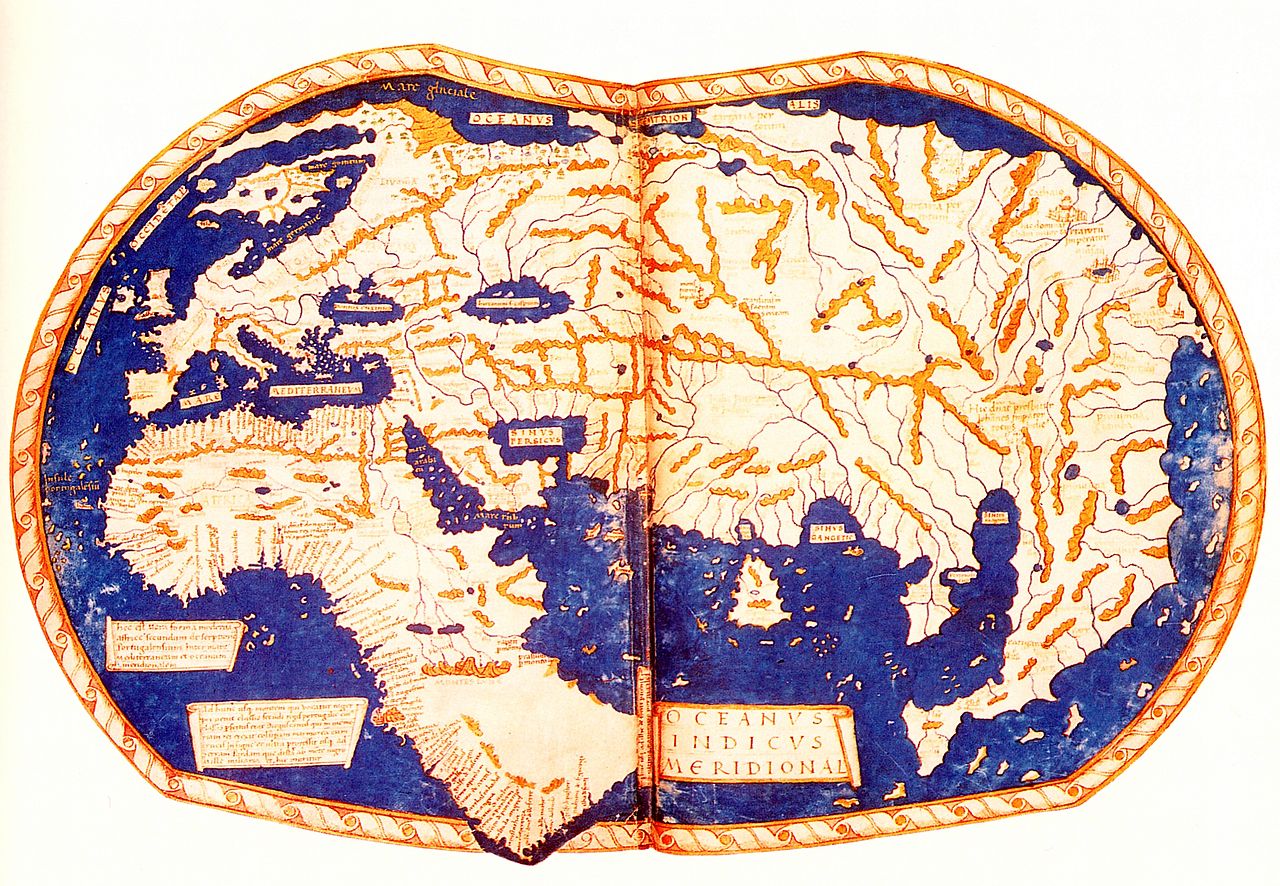 He thought if he traveled towards the west, he would reach Asia. He didn't know that the world map was different and that America exists in between.

Columbus was using an estimate of the Earth's circumference developed by Claudius Ptolemaeus, rather than the more accurate (and earlier) estimate of Eratosthenes. If Ptolemaeus had been correct then Columbus would have landed in Taiwan rather than Hispaniola.

In his report to Isabella after his return in 1492, Columbus announced his destination as "the Islands of India beyond the Ganges". Elsewhere in the same report he refers to land masses as being part of "Cathay", but this is just a generality because India was considered to be part of the continent of Cathay (China), which it actually is.

Columbus did not have an accurate idea of the distances involved, so he did not realize the presence of the Pacific Ocean. For him, the islands he encountered had to be part of India because they had no notion of any other place besides.

Even long after Columbus mariners did not understand the vast size of the Pacific Ocean, which originally they called the "South Sea", and thought it was much smaller and lay to the south of the Americas. It was not until map makers like Amerigo Vespucci and others began to carefully plot things out, that it was realized they were dealing with an entirely new continent.

Not the answer you're looking for? Browse other questions tagged age-of-discovery christopher-columbus or ask your own question.

3
What convinced the Europeans that they hadn't landed in Asia?