Were any German cities spared by the Allies for personal or idiosyncratic reasons?

Histories of the bombing campaign against German cities in WW2 often mention that German civilians towards the end of war were prey to fantastical rumours that such-and-such a city "is being spared" because a senior Allied leader once holidayed there, or has a distant relative there or plans to set up his post-war HQ there. Such stories speak of the ignorance and fatalism that prevailed in the late phase of WW2 Germany. The most famous and deluded example is Dresden, supposedly spared (up till the point when it was firebombed) because Churchill's aunt lived there.

But were there any genuine cases of German cities receiving specially lenient treatment by Allied bombers for personal or other unusual reasons?

A possible candidate is Wiesbaden. According to Wikipedia:

There is a persistant rumour that the U.S. Army Air Force spared the town with the intention of turning it into a postwar HQ, but USAAF sources claim this to be a myth, arguing that Wiesbaden's economic and strategic importance simply did not justify more bombing.[citation needed] Wiesbaden was host to the Headquarters, U.S. Air Forces, Europe based at the former Lindsey Air Station from 1953 to 1973.

American armed forces have been present in Wiesbaden since World War II. The U.S. 1st Armored Division was headquartered at the Wiesbaden Army Airfield, just off the Autobahn toward Frankfurt, until the Division completed relocation to Fort Bliss, Texas in 2011. Wiesbaden is now home to the U.S. Army Europe Headquarters and Mission Command Center.[6]

There were air raids in WWII which according to Wikipedia destroyed 18 percent of the city. However, that is much less than the destruction wrought on Frankfurt am Main, 30 miles to the east, which saw 70 percent destroyed by allied bombing raids. 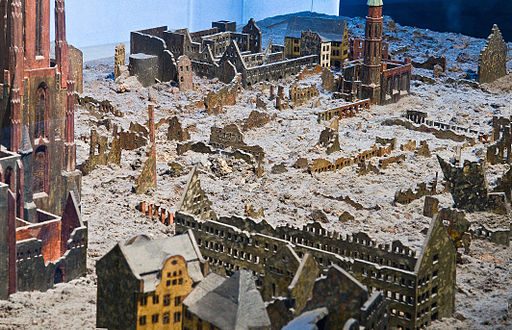 In contrast to Frankfurt, Wiesbaden has many more buildings from the late 19th and early 20th century in the historicist, classicist, and even art nouveau style. These buildings are lovingly preserved and give this city a much more prosperous and traditional look than Frankfurt. 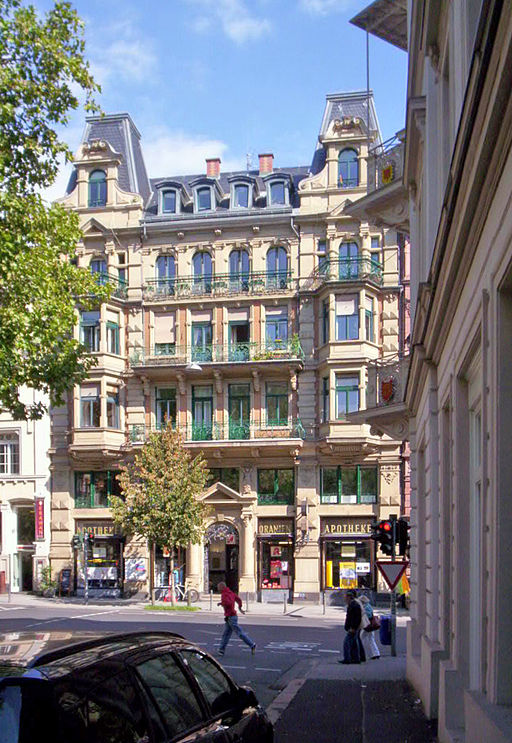 Heidelberg, Germany was indeed spared for the reason cited above that it was already selected as the future headquarters of the US Army. The reason being that the US Army needed a site with working infrastructure. However, a key reason for it being selected was that it did not have any heavy industry or else the priorities of ending the war would have had priority over a future US Headquarters. The decision to place the headquarters in a non-industrial city was part of the selection process.

I lived in Heidelberg for a dozen years starting from the mid 1960s and this was common knowledge and even taught in school at Heidelberg American Elementary School, which I attended. At the time, our family employed a German maid who stated that months before the war ended that several planes dropped paper notices notifying residents that the city would be spared as it would become the seat of the US Military post-war. I subsequently heard this same story from several other elderly Germans. After the war it held numerous commands.

While I was there it was simultaneously the Headquarters of the US Army Europe (USAREUR), the 7th Army, 4th Allied Tactical Air Forces, and NATO Central Army Group (CENTAG). Heidelberg also housed Patton Barracks and the 130th Station U.S. Army Hospital, which as a side note is where the famed General George S. Patton died. At its height approximately 25-30,000 Americans lived in Heidelberg and had two elementary schools, a middle school, and high school where the graduating senior class each year in the 1970s was numbering around 400 graduates. Just to give you a sense for its size.

The one German town not mentioned here that was TOTALLY and PURPOSELY saved by the Allies was Heidelberg. The reason was that it was chosen to be the HQ for all USA military after the war. I visited it numerous times in 1981 and found the town totally intact (a student pub in Old Town had initials carved in the bar from over 700 years ago) and I visited the American base and it was huge. I had heard that one other town in Germany was saved, and from the comments here it seems that it was either Wiesbaden or Rothenberg. Another possibility is Augsburg since it is infested in all directions by American intelligence agency buildings, as I also found out in 1981.

Yes, we know of at least one such instance: John J Mccloy, US high comissionar for Germany and a well known pro nazi character, saved an entire city from bombing;

(Wikipedia) In March 1945 in World War II, German soldiers were stationed in Rothenburg to defend it. On March 31, bombs were dropped over Rothenburg by 16 planes, killing 37 people and destroying 306 houses, 6 public buildings, 9 watchtowers, and over 2,000 feet (610 m) of the wall. The U.S Assistant Secretary of War John J. McCloy knew about the historic importance and beauty of Rothenburg, so he ordered US Army General Jacob L. Devers not use artillery in taking Rothenburg. Battalion commander Frank Burke (Medal of Honor) ordered six soldiers of the 12th Infantry Regiment, 4th Division to march into Rothenburg on a three-hour mission and negotiate the surrender of the town. First Lieutenant Noble V. Borders of Louisville, Kentucky; First Lieutenant Edmund E. Austingen of Hammond, Indiana; Private William M. Dwyer of Trenton, New Jersey; Private Herman Lichey of Glendale, California; Private Robert S. Grimm of Tower City, Pennsylvania; and Private Peter Kick of Lansing, Illinois were sent on the mission. When stopped by a German soldier, Private Lichey who spoke fluent German and served as the group’s translator, held up a white flag and explained, “We are representatives of our division commander. We bring you his offer to spare the city of Rothenburg from shelling and bombing if you agree not to defend it. We have been given three hours to get this message to you. If we haven’t returned to our lines by 1800 hours, the town will be bombed and shelled to the ground.”[3] The local military commander Major Thömmes gave up the town, ignoring the order of Adolf Hitler for all towns to fight to the end and thereby saving it from total destruction by artillery. American troops of the 12th Infantry Regiment, 4th Division occupied the town on April 17, 1945, and in November 1948 McCloy was named Honorable Protectorate of Rothenburg. After the war, the residents of the city quickly repaired the bombing damage. Donations for the rebuilding were received from all over the world. The rebuilt walls feature commemorative bricks with donor names. Traffic-reducing measures were put in place in a significant portion of Rothenburg to increase safety and accommodate tourism.

Not the answer you're looking for? Browse other questions tagged world-war-two nazi-germany bombing or ask your own question.

10
Is there any footage and/or photos of Germans surrendering towns and cities in the Western Front?
13
Were there any German operations to destroy supply routes in the Persian corridor in WWII?
15
Were there any successful attempts by the Allies to "turn" groups of Axis soldiers?
51
Why were there no internment camps for German-American citizens in USA during WW2?
13
During the Normandy landings, were any German naval assets brought to bear against the Allies?
21
Why did the German air force lose experienced pilots faster than the Allies, even though they were defending their home airspace?
4
Is there a complete list of German cities bombed by the Allies in WWII?
2
Were there any German submarines sunk after 25th of April 1945?
1
Why were some German and Japanese cities bombed more than others during WW2? Is there a scientific consensus?