Was coat of arms of Afghanistan of 1928 influenced by Soviet symbols?

This is the flag of Afghanistan with a coat of arms as of 1928: 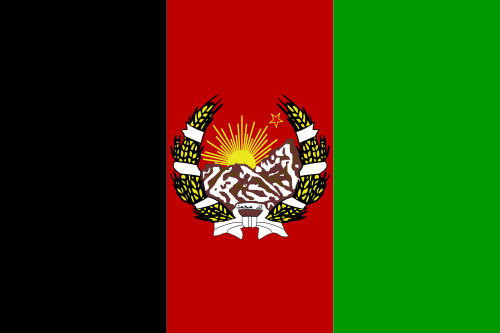 As you can see, it includes a wheat wreath, red star and the sun, all elements typical for Soviet-style coats of arms. Yet the state regime at the time was monarchy. As such, I wonder whether the regime at the time conducted or proclaimed any policies that could be interpreted as stepping in the direction of socialism, or if not, what otherwise is the story behind the emblem?

There is some difference in the sources though as to how the flag looked like, another variant being:

I cannot say definitively, but there is strong circumstantial evidence supporting the notion that the symbols pointed out on the flag in question could indeed be the result of Afghan - Soviet ties, regardless of the reasons publicly stated for the use of some of the symbols, for example: The new seal shows the sun rising over two snow-capped mountains, representing a new beginning for the kingdom, which by no means contradicts the possibility of Soviet influence. To wit:

The flag shown here, Wikipedia calls Fourth flag flown under the rule of King Amanullah, in 1928 and 1929 (when King Amanullah abdicated). Amanullah was the Afghan King who led Afghanistan to independence over its foreign affairs from the United Kingdom. Afghanistan had for some time been a place where the interests of the British Empire clashed with those of the Russians/Soviets, one of the territories involved in The Great Game - the strategic rivalry and conflict between the British Empire and the Russian Empire for supremacy in Central Asia. - British-Russian rivalry in Afghanistan. So we have a history of Russian involvement in Afghanistan. The deep Soviet involvement in the establishment of the Democratic Republic of Afghanistan was nothing new, but a continuation of long standing Russian/Soviet interest in Afghanistan, which also impacted the period of King Amanullah, and may well have influenced the design of this flag.

Regarding Amanullah's success in breaking the British domination that prevailed at the time in Afghanistan Wikipedia reports as follows, based on biographical and historical sources regarding the matter:

Russia had recently undergone its Communist revolution, leading to strained relations between the country and the United Kingdom. Amanullah Khan recognized the opportunity to use the situation to gain Afghanistan's independence over its foreign affairs

Apparently British dominion in the region had been compromised to some degree by the rise of the Soviets, giving Amanullah this opportunity, and so he would have naturally been disposed to align himself with the Soviets (perhaps he was even aided by them?) as the buffers against the British.

Furthermore, we find the following, regarding the later period of Amanullah's reign, the period leading up to the institution of the flag pictured:

At the time, Afghanistan's foreign policy was primarily concerned with the rivalry between the Soviet Union and the United Kingdom. Each attempted to gain the favor of Afghanistan and foil attempts by the other power to gain influence in the region. This effect was inconsistent, but generally favourable for Afghanistan; Amanullah established a limited Afghan Air Force consisting of donated Soviet planes.

If so, Amanullah would certainly have engaged in endeavors to cultivate favor with the Soviets when the situation called for such. In particular, an Afghan Air Force consisting of donated Soviet planes demonstrates close ties between the two regimes, and is the sort of thing which might well deserve a nod of recognition by Amanullah in this last flag, which was designed and implemented during the period of these close ties with the Soviets. OTOH, since the Afghans were probably trying to play both sides (British vs Soviet), no official explanation that the flag contained Soviet imagery was offered.

Particularly significant is the appearance of the iconic Five Pointed Red Star, of the Soviet Union in the 1928 flag, for the first time in any listed Afghan flag, and it's quite possible that this one striking innovation is indicative of the roots and influences of the other symbols as well.

All in all, during Amanullah's tenure, particularly the latter part of it, when the flag in question was instituted, apparently the Afghans maintained close ties with the Soviets, and had every interest in cultivating Soviet favor and demonstrating their binds to the Soviets. If so, it's quite reasonable to surmise that much of the symbolism of this flag is indeed linked to Soviet symbols and imagery, which again, does not preclude other additional explanations for the flag's design.

We might well bring some supporting evidence to our hypothesis from the designs on flags used by the Democratic Republic of Afghanistan , a professed communist entity existing from 1978-1992, that was in many respects a Soviet satellite nation. Scrutiny of these flags shows that they echo to some extent Amanullah's 1928 flag (particularly the second flag shown - 1980-1987/92), whereas other flags used by Afghanistan subsequent to the 1928 flag use quite another sort of symbolism, more in the western, republican tradition. Particularly, note the reappearance of the five pointed (red in 1980-7) star on the flags of this communist regime, after a 50 year absence of any star on the Afghan flag, from the time Amanullah's 1928 flag. IMO, not coincidentally,Amanullah's successors, whose flags did not bear the star, were apparently British oriented and at odds with the Soviets, with the exception of Habibullāh Kalakāni, who was a tribal leader and devout Muslim,(perhaps a predecessor to the subsequent Taliban rulers?), who assumedly had no interest in paying respects to the Soviets. See List of monarchs of Afghanistan for more information on these kings; See Historical Flags of Afghanistan for images of all the flags in question: 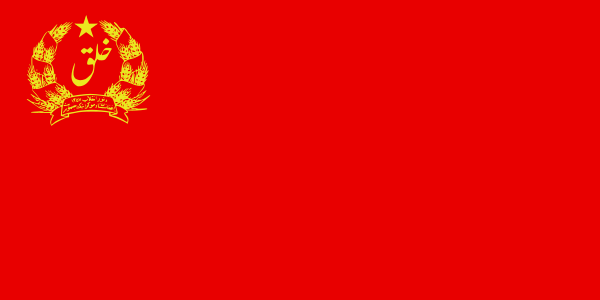 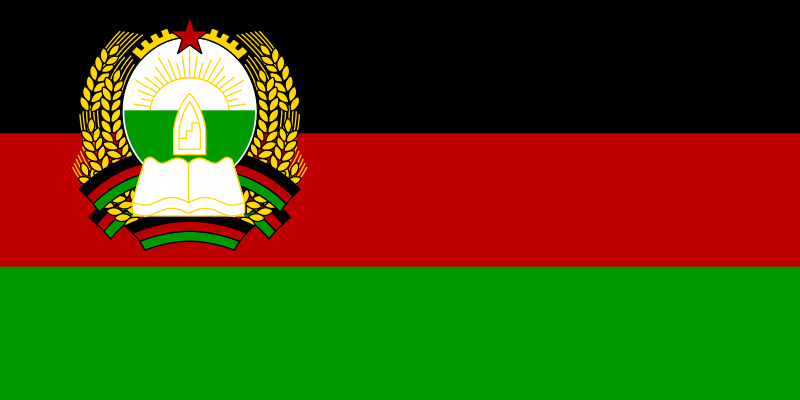 Unexplained down-votes are not constructive. Please state your reason - I often edit posts in response to comments. Questions, answers, and the site at large, are improved thereby.

The wreath goes back to 1901, and the sun rising over the mountains is supposed to represent a new beginning for Afghanistan.

That leaves the possibility that the five-pointed star was influenced by USSR, but five-point stars are not unique to communists, so probably not.

One thing that really struck me researching this was the resemblance to the Coat of Arms for Moldavia during the Soviet Era. Here they are side-by-side. 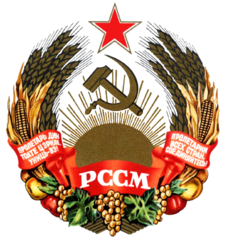 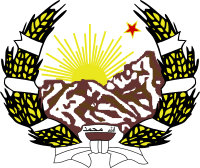 The only real difference is the replacement of the Soviet hammer-and-sickle with a background of mountains (quite reasonable for a mountainous country not part of the USSR), and some minor stylistic changes. The resemblance is far too close for it to be a coincidence. At the least, they were clearly shooting for a lot of the same themes.

1928 was an interesting year in Afghan history. The country had broken away from England a decade earlier, and in the meantime had been merrily using the Anglo-Soviet rivalry to peddle influence (and goods) from both sides. I suppose it is quite possible the flag iconography aping that of a Soviet "Republic" was part of this.

The King instituted a relatively liberal constitution in '23, and after a tour of Europe in '27-'28, supposedly came back with all sorts of more grand ideas for reforming his country. (Compulsory education for both genders, equal rights for women, banning slavery and burkhas, etc.) This produced a conservative backlash that drove him from office the next year.

None of his ideas seemed to fall on one particular side or the other of the great Communist/Capitalist divide of the era. But to be fair, his country was far too poor to support much capitalisim, so it probably was simply not much of an issue for them.

Not the answer you're looking for? Browse other questions tagged flags heraldry afghanistan or ask your own question.

18
Why were balls used on the Medici coat of arms?
14
White on Polish coat of arms
1
Why do (almost) all countries have a flag, coat of arms, anthem, national holiday etc.?
8
What does this Swiss banner/blazon/coat of arms/flag stand for?
4
Are the Swiss flag and the flag/coat of arms of Piedmont related?