Why is such big density of churches in medieval towns?

If we look at Old Towns of European cities, we can see that there are many churches in them. Of course, it is reasonable as religion was very important in lives of the medieval people. However, comparing to old towns size, there are lots of them, sometimes one neighbouring another.

I prepared a map on Google 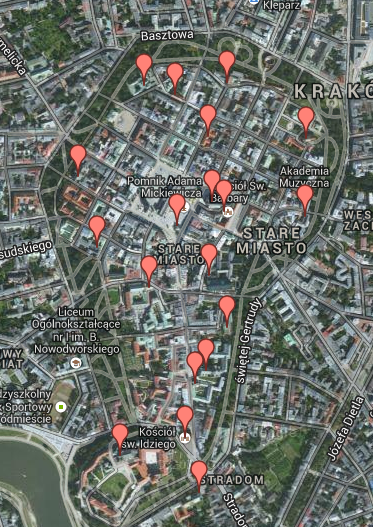 This was the capital city of Poland in medieval times, one of largest and richest in Europe. The green lane around the Old Town is called "Planty" and marks the medieval border of the city (city walls). I tried to mark all churches there, but I'm pretty sure some are missing. These are only Catholic churches, but Protestant and Orthodox do also exist. Some of them might be a bit newer (Renaissance), some of them are churches of Orders.

In Polish Wikipedia there are statistics of demography of Cracow. Until 19th century there were ca. 20 thousand inhabitants, reaching maximum in 1530 (30000). Of course these people did not live only inside city walls.

Today in the Stare Miasto district live 40545 people (source). The District area is however about 3-4 times larger than the Old Town itself, so let us assume that inside the City Walls lived about ten thousand people.

I marked 18 churches inside the city walls, which gives about 500 people per parish. This number is reasonable, however not when you realize that St. Mary church can hold about 3000 people at once (my own observation).

I assume that other cities in Europe have similar numbers.

What was the reason of building such large churches with such density? Was it only ad maiorem Dei gloriam?

There are many reasons for why cities seem to have an inordinate amount of churches for the population.

The first of this is that some churches are never built as public churches. Many churches are built to show off how devout and wealthy you are. Kościół św. Wojciecha fits at best a 100 people standing up, and is clearly one of those churches.

Also churches were built for specific uses and specific people. The Mariacki church is indeed a parish church, and would be used by the general public. The churches on Wawel (the castle) are also big, but not really intended for general public use. The Wawel Cathedral is the Polish national sanctuary and as such reserved for special use, and not a church you would go to daily.

In Visby, which became increasingly irrelevant and poor, churches was abandoned during medieval times, and finally in 1533/1534, after the advent of protestantism also changed how you used the churches, all but one was abandoned. The result is 13 (very beautiful) ruins.

But the usage of churches was different before. It's become the routine to go to church on Sundays, but during medieval times services would be held many times every day (and indeed still is in large catholic churches) and you would go more irregularly. Hence, although you didn't need space to fit the whole parish in the church at once, as you would need in protestant areas in the 19th century, when going to church on Sunday was mandatory. So calculating the need for churches on population doesn't make sense.

Instead you needed space for priests to do priestly things, such as making special services, often payed to pray for somebodies dead relative etc, and you also needed space for many altars payed for by rich people wanting to either get into heaven, or show off how good people they were, or show off their wealth, and mostly all of the above. And some churches was popular pilgrim destinations.

On our trip to Barcelona, we do found it extraordinary that in parts of the old city that churches would be such close proximity to one another. As it was explained to us, the various churches reflected a wide range of cultural, social economic and trade guild distinctions. Their was a simply plain church for mariners and another more elaborate for artisans. Near by churches with even more elaborate flair represented a comforting setting for the commercial elites. There was much that separated and segregated population groups within communities. in that way things have not changed over the millennium.

In a society where everyone not attending (a Christian) church at least once a week is suspect of being a closet Jew or Muslim, or worse, and in which the connections made at one's church are essential for business, trade, politics and social advancement, every community needs enough buildings and services to house its citizenry on a weekly basis. Even assuming an average capacity of 1,500 with three Sunday services, 19 churches still only serve 85,500 people.

Given that the plague of the 1590's left 20,000 of Cracow's population dead, one can easily imagine that the total population served by those 19 churches at the time approached 100,000.

Update:
There is also an economic element to providing a variety of flavours of religious service even within a nearly mono-religious culture. As today, there are those who enjoy a slow-paced midmorning mass complete with choral accompaniment, and those who prefer a quick early-morning mass with minimal sermon and no hymns. Those who prefer the full pageantry of a service performed for, if not by, the resident Bishop, and those who prefer a smaller service with well-known friends and colleagues instead of all the riff-raff of the city. A multitude of buildings and service times enable the clergy of a large city to cater an equal number of tastes and preferences.

Further it, is important to remember that those big Medieval cathedrals could take 100 years or more to build. In the meantime, it was still necessary to provide religious services to the nearby parishioners, rain or shine, winter or summer, is some sort of structure protected from the elements.

Well, you need to understand the value and significance that religion had on the Medieval European mindset.

Churches, in the Middle Ages, varied in size, ranging anywhere from chapels, to Cathedrals; however, most centers of Christian worship were moderately sized Churches.

The presence of the Church, to the Medieval Christian, was not the way we, in the contemporary world MAY view it-(that is to say, an archaic institution which conducts age old rituals and services amidst a ubiquitous presence of secularism and humanism). For the Medieval Christian, the presence of the Church, was the actual and existing median point between Earth and Heaven. When stepping into a Church during the Middle Ages, the average European Christian was probably smitten and dazzled by the impressive architectural design surrounding him or her. The Medieval Parish Priest was not merely a Town Preacher, but rather, the Central and perceptible Figurehead whose primary role was to reenact the life and times-(and spiritual identity) of Christ through the Eucharist.

Therefore, if the Christian religion, was at the Center of Medieval European society's collective-(as well as personal) identity, then the actual spacing of such a widespread identity manifested itself with the construction of several Churches-(in various shapes and sizes) in close proximity whereby townsfolk could walk to on a routine basis. The closer you were to various Churches, the more you were connected with the spiritual-(or so it was commonly believed).

If, for example, one looks at The Via Dolorosa in Jerusalem, the Famed Walkway is not just Home to the Church of the Holy Sepulcher, but, there are numerous chapels and churches along the pathway which are primarily administered by the Roman Catholic Church, the Greek Orthodox Church-(as well as other Eastern rite Churches). The numerous Chapels and Churches represent "The Stations of The Cross", culminating in the Center of The Church of the Holy Sepulcher. The most sacred walkway or pilgrimage within Christendom, can, in a way, serve as a model for better explaining the physical and peripatetic connection, as well as the perceptible identification the Christian pilgrim had-(and still has) with the historicity of Christ.

The numerous Chapels, Churches and even Cathedrals condensed into various Medieval European towns and hamlets, are not the equivalent of the Via Dolorosa, though, like the Via Dolorosa, they were designed for the Christian worshiper to have a physical and peripatetic connection, as well as a perceptible identification with the sacred; to actually be in close proximity towards the physical and spiritual Christian landscape.

Much of this may seem anachronistic, estranging and incomprehensible, though we must remember that we are discussing an age 1000 years prior to our own time, whereby a more religious and ultra-pious mindset was widespread among town populations throughout much of the European continent.

By counting the different religious orders that one could expect to find in a town such as Cracow one would already arrive at a fairly large number to boot: I would assume that Capucines, Franciscans, Dominicans, Jesuits, perhaps Cistercians and several others maintained presences at central sites because of their relations to court, to the local university, to hospitals, etc. It's a frequent pattern that can be observed in many (former) residential mid-size and large towns throughout Europe.

Not the answer you're looking for? Browse other questions tagged middle-ages religion architecture cities or ask your own question.

35
How did cities operate in medieval times?
17
Early medieval urban development
12
Why wasn't the Free City of Lübeck ever restored?
14
Why did Pre-Columbian Americans not build city walls?
22
Are there any underground cities known except those found in Cappadocia?
27
Why in most German places is the church the tallest building?
9
Why were the cities of the Eastern European Plain founded much later than those elsewhere in Europe?
3
How did the layout of a Medieval European village typically change as it grew into a town?
7
Marriage for executioners in Medieval times