Why did Empress Elizabeth and Catherine the Great of Russia have such different policies toward Frederick the Great?

Elizabeth of Russia seemed to consider Frederick the Great Russia's worst enemy. She waged the Seven Years' War in order to conquer East Prussia (which she planned to exchange to Poland for territory further north and east), and to restore Silesia to Austria. While she may have aimed for "border adjustments" with Poland, it seems unlikely that she would consented to one or more partitions of Poland in which Prussia would also benefit.

On the other hand, Catherine the Great undertook the first of several partitions of Poland with the same Frederick the Great, which gave Russia territory along Poland's northeastern fringes, but seemed to benefit Prussia much more proportionately, with West Prussia connecting East Prussia to Brandenburg proper, thus becoming far more dangerous to Russia.

Why was there so nearly opposite directions in the two policies by two rulers of the same country, one shortly after the other, toward a common antagonist, Frederick the Great? Was German-born Catherine more pro-German (or Elizabeth more anti-German)? Was it because Catherine was more expansionist and Elizabeth more "safety first" oriented? Also Frederick was considered something of a misogynist; he notably said of Austria's Maria Theresa, "she weeps and takes" (a slice of Poland). Did he similarly insult Elizabeth?

The First partition of Poland is the only one (of the three) to occur before Frederick's death in 1786. From Encyclopedia Britannica:

The First Partition occurred after Russia became involved in a war against the Ottoman Turks (1768) and won such impressive victories, particularly in the Danubian principalities, that Austria became alarmed and threatened to enter the war against Russia. Frederick II the Great of Prussia, however, in order to avoid an escalation of the Russo-Turkish War, determined to calm Austro-Russian relations by shifting the direction of Russia’s expansion from the Turkish provinces to Poland, which not only had a structurally weak government but also, since 1768, had been devastated by a civil war and by Russian intervention and was, therefore, incapable of resisting territorial seizures.

Thus far from being an appeasement of Frederick, Catherine's participation in the First Partition was a simple bloodless leverage of her recent victories against the Ottoman Turk.

By the time of the Second and Third Partitions all eyes in Europe were on France as the major threat to the monarchies of Europe, not yet a Prussia under Frederick's successors.

Update: (from comment above)
Catherine the Great was Peter III's widow, and was widely regarded as the most Russian man (sic) in Russia. She most probably murdered her husband in order to end his fawning over Frederick the Great. 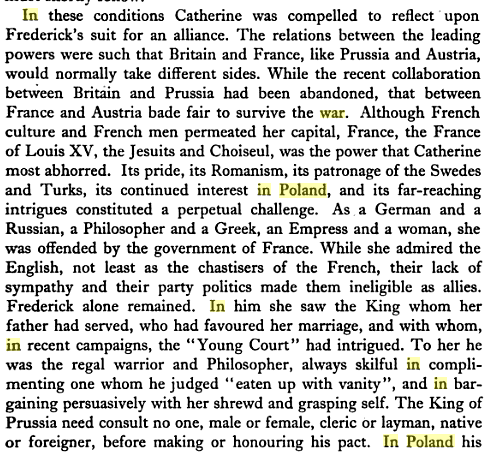 Catherine received advice and understanding from the wide variety of men that she associated with as friends and consorts and therefore was able to channel the masculine presence and perspective while still being feminine in herself, as herself. Her mentor/benefactor/replacement-mother/mother-in-law/punisher (depending on the circumstance) was a woman who was able to rule, for all intents and purposes, "alone," without intense pressure from the advice of men (though still relying on men such as Bestushev) due to her spiritual gift being that of the church of Ephesus (see my book Discover Your Master Chakra, chapter II, on oranges).

BOTH women, Catherine and her predecessor Elizabeth, were not only feminine, but held onto feminine power; the natural gift of the leader was in Catherine, but this is feminine though often recognized as masculine (again, see my book, chapter I, on red, and also On the Wings of Heaven, by Joseph Crane, regarding reds (natural leaders) and joy-bringers (natural promoters.)) It is a misnomer to characterize female power as male simply because it leads/spearheads/starts.

Elizabeth's feminine power was self-contained and not as realistic due to her changing focus. While not less feminine than the ability to rule through unification of others' perspectives, this trait is more commonly recognized as feminine. Catherine synthesized outside perspective to the benefit of male power (as it culled from the books she read, not only her own mind), while Elizabeth made more of a splash regarding what feminine is to the feminine.

Not the answer you're looking for? Browse other questions tagged germany russia or ask your own question.

19
Have Germany and Poland ever signed a peace treaty after WWII?
6
Why did Peter the Great crown Catherine I as empress?
9
What was Poland's posture during the Seven Years' War?
8
Why did the Streltsy in Russia have no summer uniform?
5
Did Peter the Great introduce the potato to Russia?
2
Why was there such tension between the Ottoman Empire and Russia during the Armenian genocide?
25
Did Catherine the Great really call for the abolition of serfdom?
8
Why was Austria given the best chunk in the First Partition of Poland, even while protesting it?
6
Was Russia ready for amphibious invasion of Istanbul in 1914?