What was Poland's posture during the Seven Years' War?

Poland seems like the "invisible" party during the Seven Years' War Ostensibly, it was fought between France, Austria, and Russia on one side, and Prussia, plus Great Britain-Hannover on the other.

Yet Poland was actually quite "involved," willy-nilly.

The trigger event was Frederick the Great's occupation of Saxony in 1756.

Did this constitute an attack on Poland that started an undeclared war between Prussia and Poland? Did Russian soldiers cross Poland with the blessing/invitation of Augustus III? Did the Russians "officially" justify their entry into Poland in terms of rescuing Saxony (and protecting Poland) from Frederick the Great? If it had won the war, Russia planned to seize East Prussia and exchange it to Poland for other considerations: Did Russia proffer this to Poland in exchange for passage?

Are there any records or writings about how the Polish government (or its leaders) felt about these issues? Why didn't they take a more active role by e.g. declaring war on Frederick the Great on behalf of their Saxon king?

Poland was already by the Seven Years War a joint protectorate of Russia, Prussia, and Austria [edit] as well as France and Turkey. In a war amongst these three powers, and given the liberum veto which allowed any member of its Diet to nullify the proceedings of the whole, it was unable to have any bearing on the course of the war:

..., Poland was not able to play any pat in the Seven Years War. While cannons and muskets were roaring in Silesia, in Saxony, in Brandenburg and Westphalia, on the seas and in the colonies, the only noises in Poland were the quarrels at the Dietines (not even at the Diet) and in Tribunals. 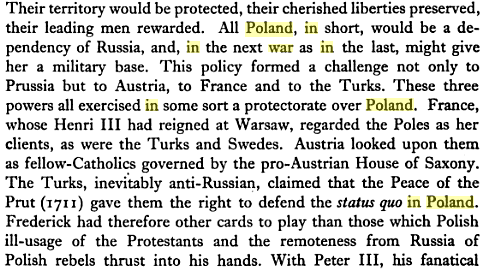 Regarding the qeustion of 'when did Poland become a protectorate of Russia' (@Felix), this was essentially defacto established in 1710 after Poland's conclusion of the Great Northern War. It had entered the war in a fairly good position (ie, balanced coalition between her and Russia), but after failing and then having a civil war during this time, and Russia realizing it's military power as time went on, it became evident that Poland's ability to support any action against the Swedes became fully dependant on Russia. Henceforth, politically and militarily, she became marginalized as a country, and Russia 'offered' to enter into a protective alliance as part of the Grand Sejm's treaty of 1710.

Regarding the question of Nobles in Poland. While it's not easy to validate the hypothesis, one can deduct key elements contributing to the lack of 'pride' among the nobles.

*There's also an old polish saying that essentially means 'every noble with a sword is his own king'... ie... they cannot be governed, they are their own little nation in person, and those without a title are nothing. If this was a prevelant way of thinking back then, one has to wonder how much did that have an effect on caring for one's nation as a whole? Problably very little.

*This leads to the notion that the peasentry probably had a far lower sense of identity than, say, their counterparts in Russia... who were certainly consripted into military ranks and allowed/expected to fight and defend their country (as like in other nations).

In conclusion, to explain why the nobles didn't have a sense of pride isn't necessarily rooted in simply... not liking one's nation. In fact, the nobles had a LOT of pride in the concept of how their nation governed itself. This is a paradox because 'why would anyone let things get so bad for their nation?'... but if one considers that in the late 1600s thru 1700s, the nobles didn't really think of Poland as 'Poland', and themselves as 'Polish'... but rather as descedents of Sarmatia who subjugated the people of a land that is common to all (Rzeczpospolita), then one realizes that this is exactly not for a lack of knowing what pride meant, but for a tradition where the nobles believed it was them who were the nation, and not the other way around.

Not the answer you're looking for? Browse other questions tagged germany russia poland or ask your own question.

16
How and why did Charles XII get to Poltava?
6
How did Poland fare under "personal unions?"
3
Why have Polish kings been such a "mixed bag?"
8
Why did Empress Elizabeth and Catherine the Great of Russia have such different policies toward Frederick the Great?
12
What land did Polish nationalists claim in 1914?
6
Why was Poland able to resist the Swedish invasion during the Deluge, but not during the time of Charles XII?
6
Before the Great War, was the word "Poland" typically used to refer only to the Russian partition of Poland?
2
For how many years in the eighteenth century were Russian soldiers present within the Polish-Lithuanian Commonwealth borders?
1
Why were the kingdom of Prussia's territorial ambitions focused in Saxony?