Where does Akbar the Great's “Great” come from?

Akbar was accorded the epithet "the Great" due to his many accomplishments, among which was his record of unbeaten military campaigns that both established and consolidated Mughal rule in the Indian subcontinent.

The cited reference for this claim is Domesticity and Power in the Early Mughal World by Lal, Ruby (2005). However, all that the linked Google Books excerpt states is:

Mughal histories speak of Akbar the Great and his many accomplishments.

The above sentence is unfortunately unclear and ambiguous.

You are confusing his epithet with his regnal name.

As already mentioned, the practice of Regnal Names was common in the Mughal and some other oriental dynasties. Definition by Wiki:

A regnal name, or reign name, is a name used by some monarchs and popes during their reigns, and used subsequently to refer to them. The term is simply the adjective "regnal", of or relating to a reign, monarch, or kingdom, modifying "name". Since ancient times, monarchs have frequently, but not always, chosen to use a different name from their original name when they accede to the monarchy.

When Akbar succeeded his father to the throne, he adopted the regnal name Akbar, a tradition that was followed by both his predecessors and successors as mentioned in the earlier answer. The full string of titles that he adopted were:

King of Kings of India, the Great Sultan and Exalted Khaqan (Khan of Khans), the Just Leader, Sultan of Islam and source of benevolence, Commander of the Faithful, the Holy Caliph of the Lord of the Age (Prophet Muhammad), Ghazi (A title given to veterans of Jihad) Emperor, Shadow of God (Derived from Hadith that a just King is shadow of God), Dweller of Highest Sky

As you can see, the epithet is not there.

So as far as your questions go that when was he granted the epithet, we don't know. He gave himself the name Akbar But he had taken it as a Regnal name, not an epithet. Akbar means literally the great but that's not the actual epithet you are talking about.

The Epithet here is "Azam", which also means Great/Greater/Greatest. He was referred to by two such epithets:

Later he proved himself through his various military and administrative achievements to be the greatest monrach the House of Timur ever produced, surpassing even his glorious ancestor, Timerlane.

Since these epithets are only to be found in later histories, we can safely assume that Akbar himself never accorded himself the title of being great. It was just a coincidence that he chose himself a regnal name which also means "Great". This is an amusing coincidence, something we would call Ism-ba-Mus'ami (اسم بامسمی) in Urdu, meaning a person whose name fits his character.

For example, see this coin minted during his reign: 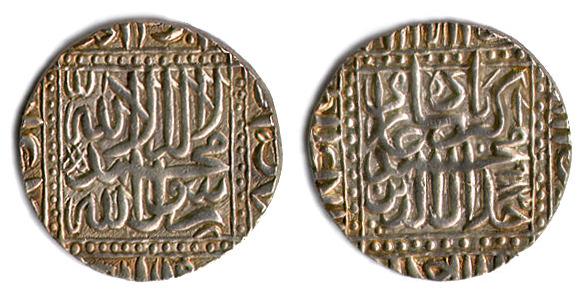 If you read the inscriptions, On left side we see the proclamation of Muslim creed:

Translation: There's no God but Allah and Muhammad is the prophet of Allah.

The right hand side bears the name of the Monarch:

It was the later Historians who gave him the epithet "The Great" as there is no mention from accounts of Akbar's own days, where he called himself that. Not to mention, it helps distinguish Akbar the Great from the incompetent Akbar II.

Jalaluddin Muhammad took the name of Akbar(great) when he was crowned king. A new name/title is not uncommon among the Mughals - Salim took the name Jahangir, Aurangazeb became Alamgir(conqueror), Muazzam took the name Bahadur Shah(brave king), Khurram went by Shah Jahan. Where do the names come from? They just picked whatever name they wanted would be my best bet.

Could not add this as a comment, hence the answer. It would be great to see better explanations to this one.

Not the answer you're looking for? Browse other questions tagged india mughals titles or ask your own question.

21
Colonisation of India: Which regions of the United Kingdom did colonial personnel come from?
11
Token status of the Mughal throne
8
Was Alexander the Great ever an emperor?
10
Why did the British “Indian” army come disproportionately from particular regions?
11
What does D·G·R·IMP·S·A·G·H·B·REX·A·A·B·L·D stand for?
14
Where are the descendants of Mughals today?
8
Did St Thomas really come to India?