Was German ever an official language in the USSR?

What can be said about historical perspective of this document, seemingly composed in German? 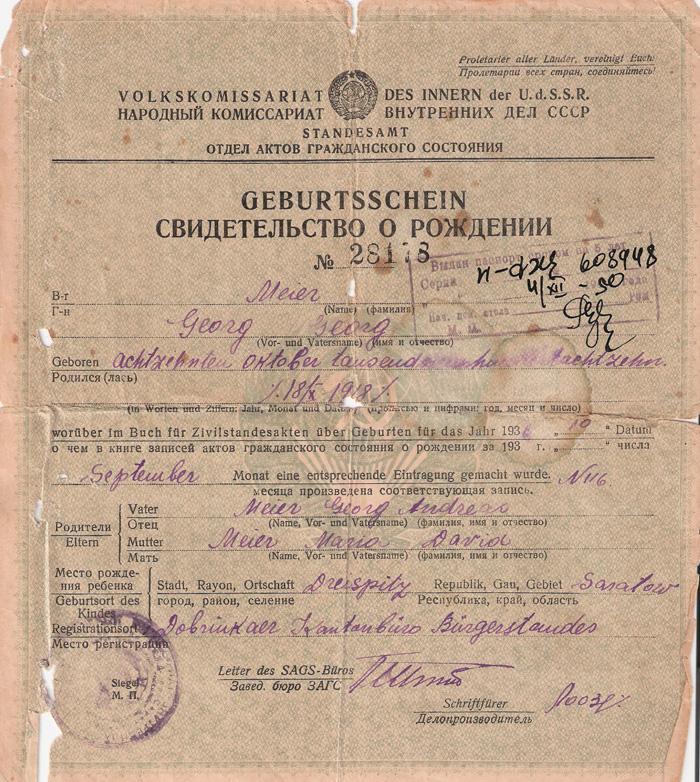 The republic was created following the Russian Revolution, by October 29 (some claim 19th) Decree of the Soviet government, Volga German Workers' Commune, giving Soviet Germans a special status among the non-Russians in the USSR. It was upgraded to the status of Autonomous Soviet Socialist Republic on February 20, 1924 [...] It became the first national autonomous unit in the Soviet Union after the Donetsk-Krivoy Rog Soviet Republic. It occupied the area of compact settlement of the large Volga German minority in Russia, which numbered almost 1.8 million by 1897. The republic was declared on January 6, 1924.

[...] To the moment of declaration of the autonomy an amnesty was announced. However it eventually was applied to a small number of people. According to the politics of korenizatsiya, carried out in 1920s in the Soviet Union, usage of German language was promoted in official documents and Germans were encouraged to occupy management positions. According to the 1939 census, there were 605,500 Germans in the autonomy.

The German invasion of the Soviet Union in 1941 marked the end of the Volga German ASSR. On August 28, 1941, Joseph Stalin issued a formal Decree of Banishment abolishing the ASSR and, fearing they could act as German spies, exiling all Volga Germans to the Kazakh SSR and Siberia. Many were interned in labor camps merely due to their heritage. The Republic was formally extinguished on September 7, 1941.

The German Wikipedia contains a list of all towns of the Volga Republic, there is also Dreispitz mentioned. Some informations of the town are also available at cu-portland.edu and lowervolga.org

There are still some areas with German background.

But all this regions have the same problem: The German speaking people are mirgating to Germany or are assimilated by other local people.

This is a birth certificate of Georg Meier, born in Dreispitz, Saratov Oblast, Volga. And if you think not only his name, but also the village name sounds surprisingly German, that's because Dreispitz was founded by German protestants in 1767, and those living there were mostly German.

And Drespitz was not alone. There were apparently 104 villages founded there by Germans, and as such there was a large German speaking population in Volga. German may not have been official, but it seems that the Russian and the Soviet authorities in this area provided at least some dual-lingual papers.

Let me add to these explanations and address the question in jwenting's comment. The Soviet Union consisted of 15 republics, each of them having its own official language. According to the constitution, each republic was an "sovereign state", with its own parliament and constitution and a right to leave the union (which eventually happened). All documents were written in two languages: local and Russian (except in one republic, Russia). In addition to these republics there were smaller units: autonomous republics, autonomous regions, and autonomous districts. These had a smaller degree of autonomy than the principal republics. The German Autonomous Republic was abolished during World War Two. However, at least in the beginning, (before World War Two) all these smaller units used their own languages for all kinds of documentation.

So, to answer the original question: yes, German was an official language in a part of the USSR, from the creation of USSR until World War Two.

Not the answer you're looking for? Browse other questions tagged soviet-union language or ask your own question.

7
Why the USSR insisted on ban of the 1943 German film Munchhausen in Nuremberg?
13
What was the official language used across European monarchies in the XII century?
4
What was the German perspective on Stalingrad?
11
What was the standard spoken language (dialect) in the Three Kingdoms period?
4
During the Chola dynasty how extensive was the use of Sanskrit in government and by the people?
5
Were there attempts to rename the French language Prussian order Pour le Mérite, why was it never Germanised?
14
Is there convincing evidence that the language of Bulgars (proto-Bulgarians) was not Turkic, but Indo-European?
15
How can I properly learn the history of a country whose language I don't speak or read?
7
When was the last moment that Dutch, German and Swiss German were the same language?