Was there a Spanish plan to retake Malta, had the siege of 1565 been succesful?

H. J. A. Sire speculates in The Knights of Malta (p71) that the Spanish fleet would quickly move and retake the island, had the siege been successful. The same claim is made - in passing - in Tim Willocks' historical novel, The Religion. If the siege had been successful, the Spaniards would appear as liberators, and if their counterattack succeeded, the strategically positioned island would have been theirs (as the Knights Hospitaller would have been purged in the siege).

The claim is supported by the fact that the bulk of Don Garcia's relief force only arrived in the island a day before the four-month-long siege ended, and only after it became obvious that the Turks wouldn't succeed in conquering the island.

Do we know of a concrete plan for retaking the island? Were there any actual preparations? I'd appreciate answers supported by contemporary or near-contemporary Spanish sources.

It seems based on the text from Helen Vella Bonavita book Key to Christendom and George Cassar, a professor in Malta, book Defending a Mediterranean island that the Spanish were not necessarily intending to retake the island, but hoping to defend it.

The Knights Hospitaller at the time existed on Malta only because of a land grant by the Spanish crown in 1530 from Holy Roman Emperor, and king of Spain, Charles the Fifth. By giving the Knights this territory Charles would be placing an enemy of the Ottomans directly capable of raiding their trade routes in the Mediterranean without risking the provocation of the Sultan. Thus:

By passing on Malta to others, the Spanish kings were thus continuing to play their centuries-old win-win game of keeping Malta within their realm without having to pay for its upkeep and protection, yet resting their minds that there was a trusted vassal administering their property

Additionally in Bonavita book she writes:

Since the fall of Constantinople in 1453 its constant aggresive expansion had been a constant conecern to politcal and relgious writers alike. The complete fear of Ottoman Domination that appears in so many of the texts concerning the Turks in the sixteenth centruy.

When the Ottomans did strike in 1565, Spain immediately began conscripting a relief force for the island of Malta lead by Don Garcia which didn't arrive until September the 7th nearly 4 months later in the Gran Socorosso. However a small detachment led by the Spanish knight Don Melchior de Robles arrived sometime in July indicating that Spain was actively thinking of defending the island. (Below is a painting of Don Robles relief force that arrived in July 1565) 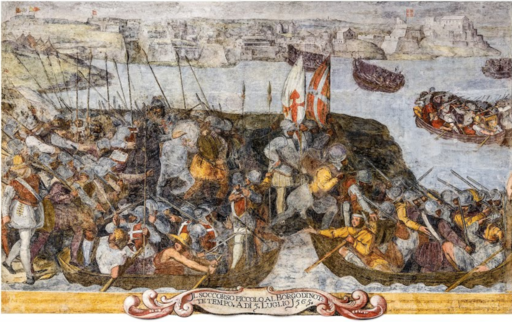 While the knights had considerably beaten back the turks by the time the relief force had arrived in September the Turks had still been in the middle of sieging the fortress. It wasnt until the combined Spanish relief forces arrival that the Turks were finally routed and the Knights saved.

Furthermore, the arrival of Don Garcia's relief force 4 months into the siege only occurred because it took Spain that long to assemble troops and ferry them to Malta. Spain had no incentive to necessarily recapture the island from the Knights because they had gifted the island to them and kept them as loyal vessels. Instead Spain was actively trying to defend the island the entire four months because retaking the island would be a costlier process then simply defending their ally who already controlled it.

The question is interesting: the journey between Spain and Malta would have been very fast compared to the time needed to prepare a fleet and the land forces.

I do not have specific sources acknowledging a plan was made by the Spanish, however some extrapolation could be made from similar events:

During the attack on England, the Spanish fleet did not have problematic of land forces: they were supposed to be taken in the Low Lands. But the Spanish still needed a lot of logistic and combat ships. Against the Ottoman Empire in Malta, the same would have been needed, like for the raid on Algiers in 1541: one month of preparation is considered as very short.

Considering the land opposition, the army should have been also well prepared: after all, the tercios that went in rescue of Malta had chance to oppose only 9 000 Turkish soldiers.

According to wikipedia, Philippe 2 said he would give rescue to the Maltese.

Not the answer you're looking for? Browse other questions tagged spain ottoman-empire 16th-century malta or ask your own question.

13
Was there any new military innovation during the Siege of Malta?
13
What was El Greco's relationship with the Spanish Inquisition?
4
Why didn't the Ottomans besiege Malta after 1565?
7
What was the name of the Ottoman-Spanish truce in 1580?
8
How was the Spanish Armada coordinated?
3
Was there relative peace in the Middle East before the end of the Great War?
2
Why was there such tension between the Ottoman Empire and Russia during the Armenian genocide?
8
Is (or was) there a version of the Maltese Cross with the right arrowhead missing? Does it have a name?
8
Why was Saturnino Martín Cerezo honored by the Spanish government?