Why were all Y-12 operators of Manhattan Project women?

I have searched a while and I have not found any evidence of why all operators at Y-12 had to be women. 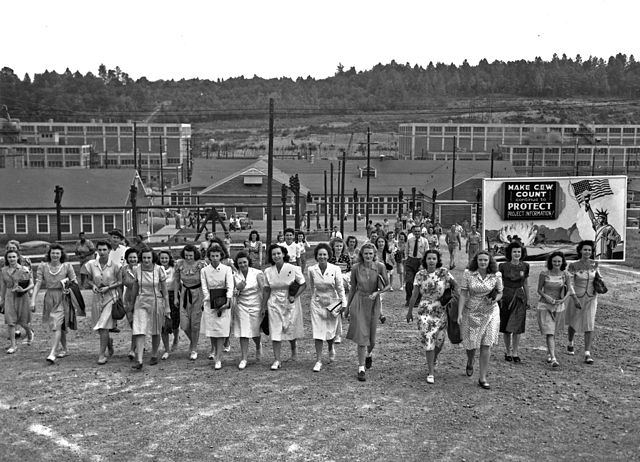 Rosie the Riveter is a cultural icon of the United States, representing the American women who worked in factories during World War II, many of whom produced munitions and war supplies. These women sometimes took entirely new jobs replacing the male workers who were in the military.

The term "Rosie the Riveter" was first used in 1942 in a song of the same name written by Redd Evans and John Jacob Loeb. The song was recorded by numerous artists, including the popular big band leader Kay Kyser, and it became a national hit. The song portrays "Rosie" as a tireless assembly line worker, who is doing her part to help the American war effort. 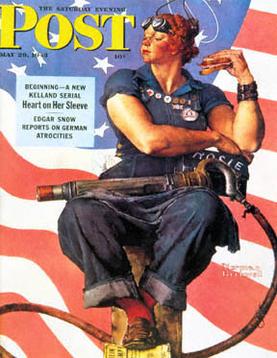 Norman Rockwell's image of "Rosie the Riveter" received mass distribution on the cover of the Saturday Evening Post on Memorial Day, May 29, 1943. Rockwell's illustration features a brawny woman taking her lunch break with a rivet gun on her lap and beneath her Penny loafer a copy of Hitler's manifesto, Mein Kampf. Her lunch pail reads "Rosie"; viewers quickly recognized this to be "Rosie the Riveter" from the familiar song.

Q Why were all Y-12 operators of Manhattan Project women?
I have searched a while and I have not found any evidence of why all operators at Y-12 had to be women.

A quite likely explanation for this question might be: it's just untrue that all operators had to be women!

While the forefront of the picture is indeed filled with women, there are at least a dozen men in the picture as well. Particularly easy to spot on the right half of the image.

The site Explore Oak Ridge explains a certain preference for female operators, that came when the supervisors evaluated the performances:

Who Were the Calutron Girls of Oak Ridge?

One of the most iconic photographs from the Manhattan Project in Oak Ridge, TN features two rows of women sitting in front of imposingly large machines covered with meters and dials. Taken by the legendary photographer Ed Westcott, this picture captures a typical day for the “Calutron Girls,” the women charged with the task of monitoring and maintaining the mass spectrometers at the Y-12 uranium enrichment plant. 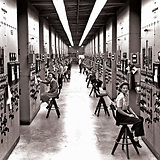 When women were hired to operate the calutrons, some of the physicists at Y-12 didn’t think they were up to the job. However, the Y-12 supervisors ultimately found that the young women were better at monitoring the calutrons than the highly educated men who used to operate the machines. If something went wrong with the calutron, male scientists would try to figure out the cause of the problem, while women saved time by simply alerting a supervisor. Additionally, scientists were guilty of fiddling with the dials too much, while women only adjusted them when necessary.

That makes "being a woman" not the exclusivity criterion the question assumes. But if you have a group of people barely trained and out of high-school subjected to a gender-pay-gap, who are also evidently better performing at the task at hand, the it's easy to see how the situation evolved wuickl into the impression of 'women-only'.

Neither picture nor the above description should transport the impression that only "girls" worked at that facility: Women Scientists in the Manhattan Project.

It seems appropriate to point towards a certain characteristics fo these images, as they are apparently not only misleading the OP, but are of less documentary value than commonly thought if anyone sees 'historical images'. In this case criticism of various points is not far from the horizon:

One of the most recognizable images is that of the ‘Calutron Girls,’ snapped by Westcott in 1945. The ‘Calutron Girls’ photograph shows two rows of young white women working in the Y-12 plant, monitoring multiple dials embedded in tall, gray metal columns. In addition to illuminating the role of the generic (white) worker, the photographs provide evidence that women played a part in the war effort; Rosie the Riveter lays down her rivet gun to observe an electromagnetic separation dial.19 Row upon row of these women can be imagined in multiple rooms stretching out like so many Tiller girls across the stage.20 The description that the German sociologist Siegfried Kracauer gives to the Tiller dancers could easily be applied to the workers in Oak Ridge: ‘These products of American distraction factories are no longer individual girls, but indissoluble girl clusters whose movements are demonstrations of mathematics’ (1995, pp. 75–6). The image conveys the enormous scope of the Manhattan Project and its labor intensity, where everyone is doing her part to achieve a collective goal.

The image of the Calutron Girls and the rest of the collected photographs offer a very idealized version of the work that was done at the atomic factories, even the African-American workers, who were given the least desirable jobs on the reservation, including carrying coal or collecting the garbage, smile at the camera. Perhaps not surprisingly, there is no counter-balancing exhibit of the destruction of the cities of Japan. Alone in another room is one figurative photograph of a Japanese sufferer. The entire business of the Manhattan Project from start to finish is simplified: it is depicted in black and white. While an in-depth analysis of Westcott’s catalog is not within the scope of this chapter, these examples should illuminate the overall tone of the retrospective exhibit.

Instead of providing a space for an open discussion of nuclear weapons or even a glimpse of the catastrophic loss of civilian lives in Japan, the overly nationalistic space of the museum focuses on two seemingly contradictory elements to justify the US nuclear past: American victory culture and American innocence. Sociologist Steven Dubin paraphrases the idea of American victory culture in his work on controversial museum exhibits, from Displays of Power:

[Victory culture] is a set of beliefs that dominated American thinking since colonial times. A central precept was that savages – be they Indians or the Japanese in their sneak attack on Pearl Harbor – continuously provoked conflicts that Americans felt compelled to respond to, typically with vanquishing force. (Dubin 1999, p. 188)

Victory culture goes hand in hand with the American culture of innocence, the myth of a benevolent nation stripped of any lust for power. It is a position of denial that ignores the role the USA has played in global politics, and instead presents the nation as a non-aggressive entity, only attacking when attacked (Sturken 2007, p. 7).

Not the answer you're looking for? Browse other questions tagged united-states world-war-two nuclear or ask your own question.

8
When was General Douglas MacArthur made aware of the Manhattan Project?
4
Why did America not know about Soviet espionage in manhattan project
7
Which method of telephone calls was more popular: station-to-station or person-to-person?
49
Has there ever been an instance of an active nuclear power plant within or near a war zone?
9
How would an American returning from international travel prove his citizenship before 1914?
2
Are there any good histories of industrial production during WW1?
9
How important were Einstein and Szilard and other scientists to the creation and ultimate success of the Manhattan Project?
0
How much support did America give to the scientists working on the Manhattan Project?