Did American forces specifically target officers during the revolutionary war?

There is a story that says that American revolutionaries fought unconventionally against the British, including targeting their officers, which was not done between European forces.

Is this true or is it a myth? If it is a myth, what factors may have lead to and sustained it?

It appears that the practice was becoming more common, and was a tactic being pursued and developed by American Revolutionaries.

The following passage is from "To Be A Military Sniper" - Gregory Mast, Hans Halberstadt 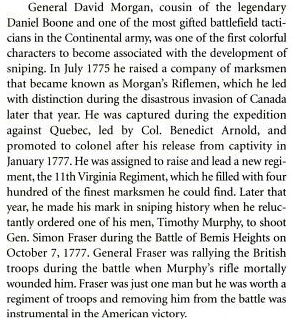 Further paragraphs from To Be A Military Sniper explains a little more about the growing role of Rifles in the American Revolutionary War, but the above passage shows the the Revolutionaries did intentionally target British Officers with rifle fire.

One has to make a distinction between army, as in the Continental Army directly answerable to the Continental Congress, and militia, with far less military training and discipline.

The Continental Army was generally equipped with the standard military smoothbore musket using a round ball smaller than the bore, designed for fast reload, and to be fired in volleys. Accuracy was terrible with smoothbore muskets: no rifling and the loose fitting bullet tended to rattle around as it moved down the barrel. The idea was to take a unit and turn it into a giant shotgun by firing volleys on command, letting random chance do the rest.

For the most part, the Continential Army, or any formal army of that time, couldn't target enemy officers, because their muskets did not have the accuracy to reliably hit an individual at even 50 yards. Whether the policy of not targeting officers was a gentleman's agreement, or just a byproduct of the inaccuracy of available weapons, would make for an interesting debate.

The colonial militia were another matter - most were untrained, many were unarmed volunteers, and those that were armed, were equipped with whatever they had, a 'shoot what you brung' affair. Armed militiamen often were woodsmen, already equipped with a Kentucky Rifle, a lightweight firearm expressly designed for accuracy (and expressly designed to be used in dense forests, but that's another story). These could reliably hit a person at up to 100 yards.

Did the militiamen deliberately target officers? The closest I could find was this account of Tim Murphy (maybe) shooting General Simon Frasier, after Daniel Morgan had told his men to deliberately target Frasier. The loss of Frasier contributed greatly to the defeat of the British in that battle - an event that was to be mirrored in US civil war when Sgt ER Grace killed General John Sedgwick at the Battle of Spotsylvania Courthouse (at a range of over 800 yards, using a Whitworth Rifle), leading to the defeat of the Union forces.

It should be noted that Morgan's unit was technically part of the Continental Army, but was formed from local, self equipped militia, and had a high number of long range rifles as opposed to smoothbore muskets. So it is not unreasonable to theorize that Morgan and his troops were not disciplined soldiers, and Morgan's orders to target Frasier were a matter of personal initiative and not formal policy promulgated by army leadership.

Also, officers of that day tended to stand out, as they wore more elaborate uniforms than enlisted men, and usually were on horseback. By standing out, they make themselves tempting targets for a marksman at a distance. The militia and individual sharpshooters were already using the unconventional tactic of firing from cover at great distance, using the increased accuracy to make up for lack of numbers. Selecting the most obvious target would be a natural extension of targeting individual soldiers at great (for the time) distance, so it is quite possible that a lot of British officers were shot by marksmen simply because they were the most visible target.

Still, I can find no reference that the formal Continental Army deliberately targeted British officers as a matter of policy.

In a twist, a British officer, Col Patrick Ferguson (of Ferguson Rifle fame), did not shoot General George Washington, when he had an opportunity to do so at the Battle of Brandywine - Ferguson did not want to shoot a gentleman in the back.

The term 'sniper' was not really in use at that time. Back then, the correct term was 'sharpshooter' or 'marksman', as in a person who possessed above average shooting skills, typically using a rifle of above average accuracy.

The Americans targeted officers at least once. A sniper at Saratoga, armed with a rifle and lodged in a tree, shot British officers and was instrumental in the American victory. The sniper is reportedly named Timothy Murphy.

This is an excerpt from the Wikipedia article:

"Morgan called on Murphy and said: "That gallant officer is General Fraser. I admire him, but it is necessary that he should die, do your duty." Murphy climbed a nearby tree, took careful aim at the extreme distance of 300 yards, and fired four times. The first shot was a close miss, the second grazed the General's horse, and with the third, Fraser tumbled from his horse, shot through the stomach. General Fraser died that night. British Senior officer Sir Francis Clerke, General Burgoyne's chief aide-de-camp, galloped onto the field with a message. Murphy's fourth shot killed him instantly."

I know that the targeting of officers was not permitted in European armies. American military leaders were mostly veterans of Britain's war against the French and Natives, so they knew how European armies fought. America modeled its military after the British, French, and Spanish; dressing ranks, firing vollies, and for the most part, they didn't shoot officers specifically from what I've seen.

The veterans that fought for the British and didn't become officers joined militias. They knew the capabilities of the British and they knew that the British war methods could work against them if they didn't fight the same as them. The Militia fired from cover, fired as often as they possibly could, and in some historical cases, fired upon officers first to plunge the larger British force in disarray.

I pretty sure the Continental Army didn't intentionally kill officers. Yes they may have killed a few due to stray bullets, cannon fire, ambush, ECT. However, I'm sure the Militia targeted the officers first so that no matter how small their force was, they could beat the unlead, highly disciplined soldiers.

But this is not 100% accurate. I could be wrong. I could be VERY wrong. So don't take what I have written as fact, but at least consider it.

The Prussian platform provided for the protection of officers in combat. If officers were killed, it would have been assumed that the foot soldier, leaderless, would have become uncontrollable on the battlefield. In the time of Napoleon, military honor was in full force and combat was a gentleman's affair. The International Red Cross did not exist, the Geneva Conventions did not exist, so the rules of war were laid down by the combatants themselves. In addition, Clausewitz and Jomini had a hand, through their published works, of guiding a controlled battlefield. The American Colonials were always at a disadvantage on the battlefield. They could not stand up the highly disciplined British troops and the linear tactics they used. So, the Americans turned to guerilla warfare and sniping. It was considered illegal by the Prussian influenced armies to kill an officer as they held the reins of battle.

Not the answer you're looking for? Browse other questions tagged warfare american-revolution or ask your own question.