Why did Xerxes choose Hellespont over Bosphorus?

As a side remark, I have heard the references to Hellespont far more often compared to Bosphorus, a fact which I find interesting.

If you look at Xerxes' route, the answer is obvious: 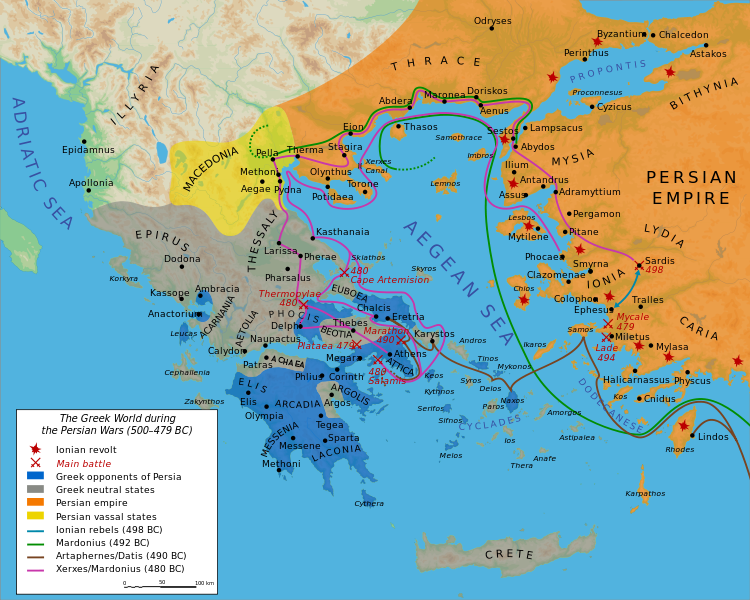 Xerxes' army moved North from Sardis, seeking alliances with or conquering Ionian cities. There was extremely little of interest for Xerxes after Abydos (the crossing point, according to Herodotus). Going all the way to Bosphorus, a few days of marching essentially in the opposite direction of Greece, just to save a few meters of a (floating) bridge wouldn't have been the wisest of decisions.

More importantly, Xerxes' land route was paralleled by the route of his fleet. The fleet was essential in the crossing:

Furthermore, had Xerxes' chosen Bosphorus, he wouldn't have avoided Hellespontus' turbulent waters, quite the opposite. The fleet would have had to deal with Hellespontus' unwelcoming waters twice: Once going from the Aegean to Bosphorus to support the construction of the bridge, and once returning.

Not the answer you're looking for? Browse other questions tagged persia greco-persian-wars or ask your own question.

27
Was there an assassination attempt against Xerxes in the battle of Thermopylae?
5
What role did War elephants play in the battle of Thermopylae?
1
Why did Alexander the Great succeed in overthrowing the Persian Empire?
13
Why did Xerxes need a canal across Mount Athos peninsula?
28
Did the Persian Immortals instill fear in their Greek adversaries?
10
Why did the father of algebra speak Arabic instead of Persian?
3
Why didn't the Persians create good infantry units?
3
Why does Alexander the Great call Greeks free men while Persians slaves?
8
What were the Ethiopians doing in Xerxes' army?
27
Why did Persia adopt the movable-type printing so late?