Wikipedia says that Ronald Reagan persuaded Saudi Arabia to rise oil production so to drop the prices and make pressure on the Soviet economy. I encountered such claim in many other sources as well.

But if we look at the oil production plot 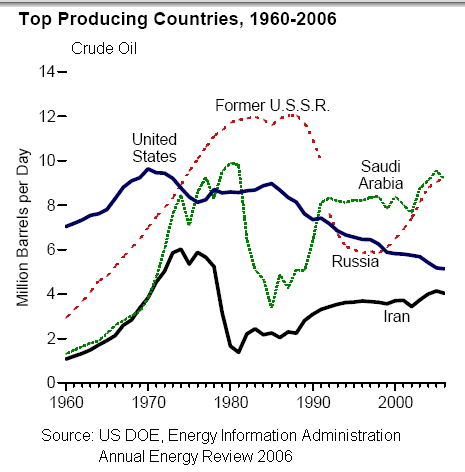 So was not it actually the USSR who dropped the prices, and not Saudi Arabia?

I will stick to the "spirit" of your question, not to the title; I presume that you are interested in contribution of Saudi Arabia versus USSR to the oil crisis, and not in the details of Reagan's personal involvement.

Side note regarding the chart: the chart is not very useful for the purposes of this discussion as it does not show relevant metric. The oil price did not depend on Soviet production, because most of this production was sold at a fixed price (domestic and Eastern bloc supply); being traded outside the market, it could not possibly impact the market price. The oil price was impacted by Soviet export to free-market countries, and of course, by the overall demand. Both values are not shown on the chart. I find this much more enlightening, see page 7.

Back to the point. The same source that backs up said Wikipedia article says "We are certain about the date [...] September 13, 1985 [...] in the next 6 months oil production in Saudi Arabia increased dramatically." This increase in production can be seen in your chart, so there is no contradiction here. The oil price dropped between December 1985 and March 1986, and it seems that all sources attribute it to OPEC (which includes Saudi Arabia).

As of the export from USSR to the West (of which oil was the most significant part) I see:

So it does seem that USSR did not try (did not want? had no capability?) to bring the market price up. This was obviously to their disadvantage.

This is almost more of an economics question.

The thing is, Oil prices at the time had a much more drastic effect on the US economy than the Soviet one, so you don't really have to look outside of US borders for reasons.

Rising Oil prices were almost single-handedly responsible for getting Regan elected. When oil prices go up, the price of everything in the USA rises due to the vast distances involved in shipping things around our continent. This caused a never-before-noticed effect in the USA economy which they had to invent a new word for: stagflation. Normally unemployment and inflation vary inversely to each other. Eg: if a recession happens, people lose jobs, but inflation drops too. During an economic boom, the opposite happens.

However, during the Carter administration there was a big Oil production slowdown, and the result was both inflation and unemployment got worse. The government didn't much know what to do about this, because their typical solution for one would make the other worse.

Regan got elected because of this, so quite sensibly it was a very high priority of his to stop the Oil slowdown. USSR or no, he'd really like to be re-elected.

I know there's a tendency now to grasp whatever straws available to paint Regan as the cunning genius who brought down the USSR. Having lived through it myself (and watched the guy's press conferences and speeches), I'll tell you it was much more like living through a live action Mr. Magoo cartoon. He may still deserve the credit, but the guy was just trying to drive his car...

Not the answer you're looking for? Browse other questions tagged soviet-union cold-war or ask your own question.

21
Is there any evidence to support the claim that the US Strategic Defense Initiative played any significant role in undermining the USSR?
9
Is there evidence to suggest the CIA didn't want Reagan to end the Cold War?
20
When did the Soviets get the ability to drop a nuclear bomb on the United States?
3
Did the Chief of Soviet General Staff really say this?
3
Did the Soviets have an alternate source of oil in Iran during World War II?
3
How much oil did the USSR export in the 1930's?
13
Was PepsiCo really sixth largest military force?
2
Did Soviet Union really consider using atomic bomb against US aircraft battlegroup?
1
How did the countries devolved from USSR turn from communism to democracy or other ideology peacefully after the collapse?