Why is the United States the only developed country whose labour laws leave most up to the employer? [closed]

Ask Question
Asked 7 years ago
Active 7 years ago
Viewed 1k times
18
Closed. This question is off-topic. It is not currently accepting answers.

I read this post: "Bad Facts About The USA".

It says that the United States, Lesotho, Swaziland and New Guinea are the only countries in the world not to mandate paid leave for mothers of newborns. There are other labour laws, like paid vacation or paid sick days that employers don't need to pay.

I did a little research and discovered these things are true. But what does this mean in practice?

Is it normal for companies to pay these things for their employees? But if I want to pay less than possible to my employee, I can legally do it? I don't know the reality in the United States, but this makes me believe that work in a low income job in the USA might have less benefits than China. I'm trying to imagine how a job in a McDonald's restaurant is.

Have workers tried to change this? Did they try in the past or are they trying today?

What is the historical reason that the United States is today the only developed country like this?

The United States is a federation where, in theory, the States delegate certain powers to the federal government (USG) which they could not effectively exercise individually (such as defense), while reserving all other powers to themselves and the people. Due to reserved powers, internal matters like labor regulations would generally fall under State jurisdiction where many States do apply their own laws. In the example of maternity leave, six states and the District of Columbia mandate certain benefits. As another example, there is a federal minimum hourly wage but most states also mandate a higher state minimum wage. So in general, an absence of federal law on any given issue does not preclude the States or even local governments from acting, and this is certainly the case in labor laws and benefits.

There is also a historical element in play. The American Revolution was one of the most libertarian in history, and the US has always leaned to the right economically. Even the Democratic Party, our more progressive major party, is center-right by international standards. Almost any regulations on private enterprise are frowned on by the conservative Republican Party, who have long been a friend to big business and would say that free markets are preferable to government intervention. At the national level US economic policy is dominated by pro-capitalist, pro-corporate ideas.

Back in the days when women (let's be honest here, particularly middle to upper-class women) were not in the workforce, maternity leave was not much of an issue.

It took until the 1990's when the changing demographics of the workforce, the increasing status of women, and the political parties in power, all aligned properly to allow for a push for maternity leave legislation. The new FMLA law (which the USA currently operates under), allowed women time off without pay, but only if they work full-time for a company with more than 50 workers. The reason the law isn't more generous is of course because anything more generous would not have passed in the 103rd Congress.

Now of course employers are free to offer something more generous, and many do. Also, states are free to do the same, and a bare handful do. 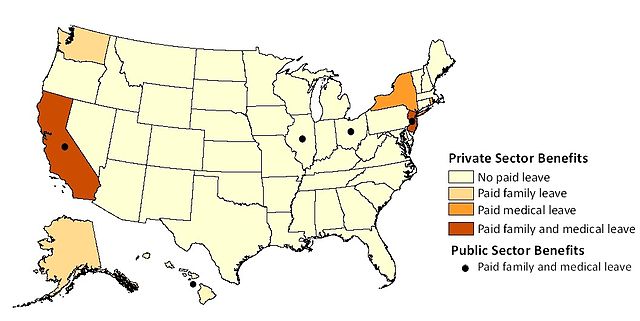 The 103'rd Congress was kind of special, in that it was the last time the Democratic Party controlled both Houses of Congress and the Presidency until a 2 year period starting in 2009. Given that the Democratic party tends to be the more friendly of two parties towards labor, and the Republican more friendly towards business interests, I think its fair to conclude that there simply wasn't a political environment as conducive to medical leave reform (or any kind of labor reform) again until that brief window in 2009. That window was almost entirely consumed with an attempt to pass universal healthcare coverage, which was considered a bigger issue (probably by both sides). Several other more labor-friendly laws were passed too. And there was also the small matter of a major recession to deal with.

First, labor conditions & laws vary greatly, even in today's developed world, so you cannot assume that just because a country is a modern economic power, it has labor laws similar to yours. Nor should you immediately assume that your country's approach is "good" and another "bad". For example, some people would argue that government requiring employers to provide paid maternity leave can cause employers to avoid hiring or promoting women of child-bearing age, for fear they will have to hold open a critical position if a woman has a baby. I know quite a few American women who would rather get good jobs and take little maternity leave than be closed out of such jobs.

Second, in pretty much all countries that have/develop a capitalist economy, have/get democratic government, & go through an industrial revolution, there is a broad pattern of workers being "exploited" through poor working conditions followed by movements to improve the lot of workers that result in laws, labor unions, and other structures to protect workers. The way this pattern plays out is determined by the history, population mix, economy, political structures, timing of events, and other factors in each country.

Third, it is great that you are interested labor history and concerned about working conditions around the world. I, for one, hope you will read up and learn more about the different ways countries wrestle with the problem of how to have a efficient capitalist economy, along with good jobs and working conditions for all. I also hope that you will see that this balance is one that the countries of the world must, increasingly, face together. I do love my Apple devices, but I'm concerned that I paid less for my iPad because the Chinese workers who made it put in long hours in grim conditions. Similarly, I love my Starbucks lattes, but I wish the barristas who serve me didn't have to support families on miserably low salaries.

13
State changing its name within the United States
11
What was the age of majority in 1900 United States?
16
How and why did trade unions in America become influenced by organised crime, but unions in Britain didn't?
5
What sort(s) of identification were used before driver's licenses were issued in the US?
33
Was slavery in the United States legally limited to blacks?
27
Why did the United States not invade North Vietnam?
8
How successful (or not) was the Civil Rights Act of 1964 concerning employment discrimination?
6
Who erected Luis Argüello's tombstone?