Did the Socialist and the Fascist party share the electoral programme in Italy?

Despite those parties being rivals, it actually made sense, since the Fascist party was born out of Social origins; strangely, though, I wasn't able to find those programmes.

Did such a thing really happen, or was I mis-taught?

What I think happened here is a case of gradual exaggeration. Benito Mussolini, who started the Italian Fascist party, was a socialist. But he got kicked out of the socialist party for supporting Italian involvement in WWI.

A similar thing happened in Germany, where DAP, the German Workers Party, acquired some nationalist opinions and finally turned into NSDAP, the Nazi party.

But by the time Mussolini actually formed the Fascist party, it was seven years since he was kicked out out the socialist party, and there was no reason for him to just take the socialist party's program and change it a bit. I also can find no support for this claim, and I think that would be more widely known if it was the case.

So, no, they did not share the same electoral programme as far as I can figure out. I did find the 1920 program of PSI, and the 1921 program of PNF, and they are not the same at all. But that doesn't prove anything, you would have to compare the program of PSI for all it's years with the programs of the several socialist parties in Italy during all their years, and to do that you probably need to go to Italy. :-)

I answered the original question in Politics, https://politics.stackexchange.com/questions/362/did-the-socialist-and-the-fascist-party-share-the-electoral-programme-in-italy , albeit not having found the PSI program online. The programs, as Lennart Regebro's answer points, are very different, and the difference isn't merely literary, ie, they say different things, not merely the same things with very different words.

As it was migrated into History, I think some more in-depth discussion is warranted.

But fascism is by no means a form of socialism. It is a very different ideological construct, and a very different political practice. And while many fascists have styled themselves and their movements "national socialist" or "national sindicalist" (as explicitly in the name of the Nazi Party or the Spain Falange - the full name of which was Falange Española Tradicionalista y de las Juntas de Ofensiva Nacional-Sindicalista), it is a misnomer, in part due to the political conditions of the first post-war, in part due to deliberate calculation of those chosing the names.

The times invited the name "socialism": in the wake of the Russian Revolution, it seemed that "socialism" was indeed the future of mankind, and everybody, or almost so, was eager to call themselves "socialist", nevermind what their actual beliefs where. To that it should be added that the developments in Soviet Russia, and later in the Soviet Union, helped such kind of confusion: as the revolution was isolated, and its initial trust for an international revolution became unrealistic, emphasys became the "construction of socialism" in the limited territory the revolution had been able to conquer - or, as put by the Bolsheviks at that time, "socialism in one country" (see, for instance, Weisbord's Conquest of Power). Which, of course, made plausible the idea of different, "national" socialisms in different countries, or nations. Then the leap from "national socialisms" into a "national-socialism" became apparently much shorter than it should be. Plus, the conditions of Soviet Russia and Soviet Union pushed towards a very strong State, both on economic considerations (the bourgeoisie and the feudal or semi-feudal landlords had to be expropriated, but as an actual abolition of property was impossible, the transfer of such propriety to the State became a logical consequence) and political needs (for a country assaulted by as many foreign powers had borders with them, and then some more, a strong army is a need, not a choice, and a strong army doesn't come without a strong State). From this, the popular conflation of "socialism = more State" was born.

More importantly, as I have argued elsewhere, fascism is more a practice than an ideology, as opposed to socialism, liberalism, or conservatism. And this practice is strongly premised on what is called "politics of ambiguity": fascism is disorder to restore order, violence to impose peace, obscenity to protect conventional morals, political action to put an end to politics, the use of modern means to prevent modernity, etc. As such, it always promote the idea that "left and right are obsolete concepts", or that there is "no difference between left and right", or that "left and right are different sides of the same coin", and so on. Of course, the popular misconceptions that "fascism is socialism" or "fascism is left-wing" are just another avatar of ambiguity politics - as we can see in the recent rise of fascism in Brazil, where the far-right claims that the former - very democratic - government of the Workers Party was "fascist" because the NSDAP was the "Workers Party" of Germany, and so the people bashing women, physically attacking gays or Blacks, and proposing the extermination of all political opposition are somehow "liberals": 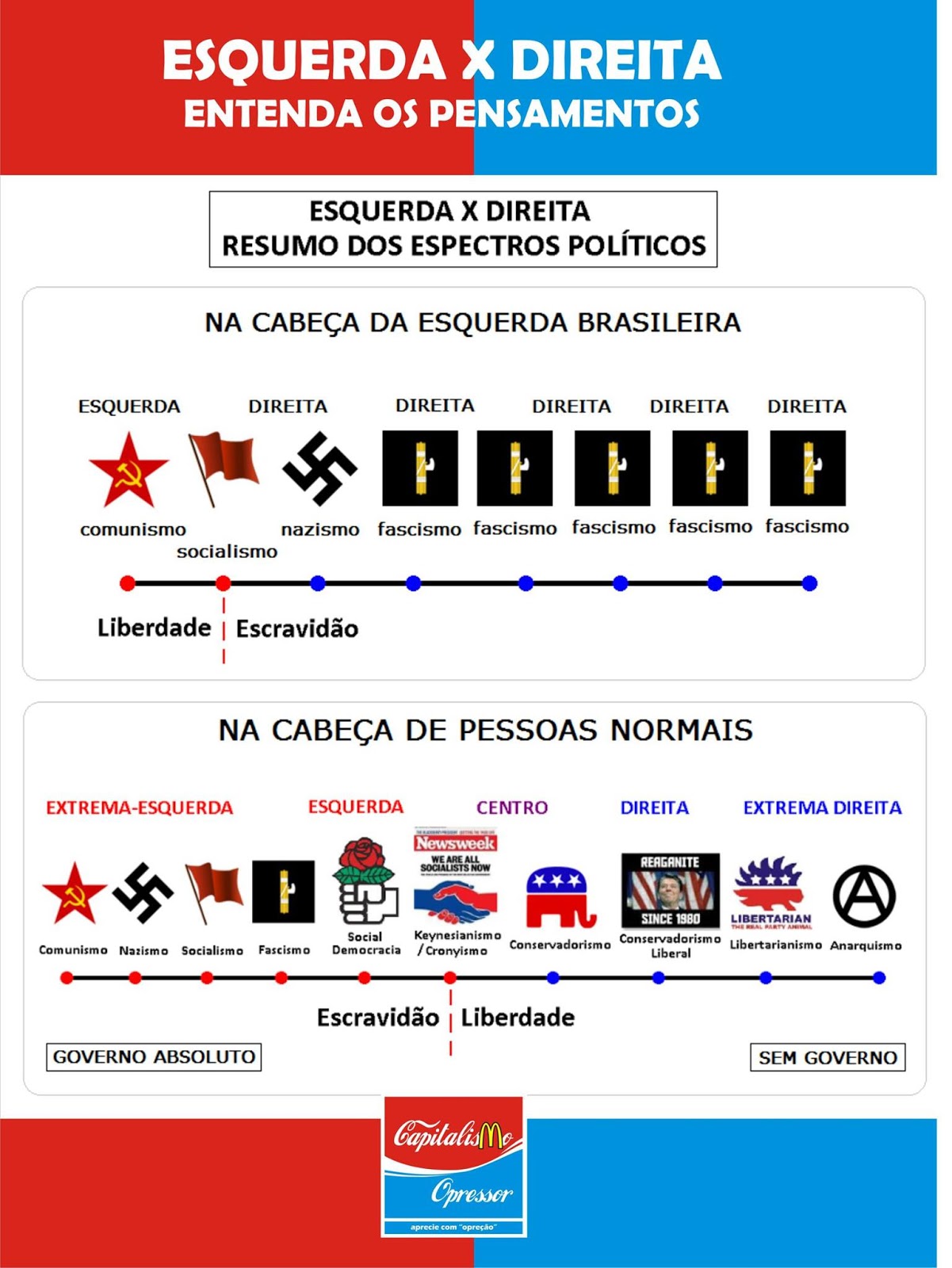 (Note: the above picture is not my opinion; it is an illustration of "politics of ambiguity", or of how fascists "think": actual capitalism is "cronyism", capitalism as they fancy it doesn't exist, nazism is left, anarchism is far-right, normal people are crazy, and so on.)

Such confusion is present even in Regebro's answer, where he says, DAP, the German Workers Party, acquired some nationalist opinions and finally turned into NSDAP, the Nazi party. Which is very removed from reality; the DAP had always been a far-right small party, rooted in pan-germanism; as opposed to Mussolini, who was actually a member of the Italian Socialist Party until he was expelled, the DAP was never socialist and was never a split from the actual socialist party in Germany, the SPD, or Socialdemocratic Party of Germany. What it "acquired" in its metamorphose into the NSDAP was not "some" nationalist opinions, but a competent leader in the person of Hitler.

Another aspect of "politics of ambiguity" is that fascism is a policiac movement posing as revolutionary. Fascism is the "ideology" of policemen when the State they serve goes bankrupt. And so fascism recruits heavily in police (see for instance the very high vote for Golden Dawn in Greece in the precincts where policemen vote (Greece: polls, over 50% of police voted for Golden Dawn) - or the obvious collusion between Greek police and Golden Dawn in the repression of left-wing demonstrations); and where fascism cannot recruit in the police, it must remain an insignificant, marginal political force (and here another difference betwee fascism in one hand and conservatism, liberalism, or socialism on the other hand: while those can be very weak and small without ceasing to be what they are, socialists, liberals, or conservatives, fascists can be at most proto-fascist if they cannot infiltrate and corrupt the State apparatuses). So, fascism is the "revolution" by people who should defend order, which in practice is its contrary: the counter-revolution by means of disorder and mutiny.

For those reasons, the Fascist party, even in Italy, where it was led by an ex-socialist, cannot share the political program of a socialist party (or a social-democratic, or a conservative, or a liberal party): while those may lie to voters in order to win elections, they aren't premised on lies. They stand for what they stand, and oppose what they oppose; fascists typically stand for what they oppose, and oppose what they stand for - and such conundrum can only function in the measure that fascism is always a flight forward; if its absurds are exposed, it cannot come back to reason, but it must go into further, even more contradictory absurds. Thence the dictum attributed to Goebbels, a lie repeated a thousand times becomes the truth. The program of a fascist party, for this reason, if it exists at all and is not merely a decorative piece, must be essentially an appeal to emotion. It must be an appeal to action, rather than a set of demands. It must be an instrument to convince people that the important is not the goals of the movement, but the movement itself, action for the sake of action (and consequently, violence for the sake of violence). And this cannot be done by inserting a national clause into a socialist program, no more than by adding a protectionist clause to a liberal program or a techno-modernisation clause to a conservative program. Fascism must make grandiose claims about its own originality, if it is going to be fascism.

Hitler's political trajectory is well documented. He wrote a book about it, and from it we can easily see that the two main influences in his political thought were Schoenerer's version of Pan-Germanism, and Karl Lueger's practical politics and policies (which isn't, curiously, used to "prove" that Nazism was a version of political catholicism a la Leo XIII just because Lueger's party was "Social Christian"). He evidently was able to appropriate (quite distorted) imagery of the left (the red flag, the name "socialism", the party discipline, the appeal to the masses), but he did it in support of (also distorted) right wing content (family values, nationalism, natalism, law-and-order-ism, agrarianism, etc.)

Mussolini's political trajectory is also well documented; unlike Hitler, he wasn't an obscure figure suddenly brought into the political scene. He was a card carrying socialist, part of the party's establishment, holding positions of responsibility. He broke with his party on the subject of support for the national war effort. Such break wasn't superficial or fake; he went great lengths in distancing himself from that past. His political program, as can be read in the link already provided, is utterly anti-socialist, and not a mere addition of nationalism to an otherwise socialist program.

Again, Mussolini certainly used left wing imagery (and in that, he might be a third decisive influence in Hitler), but again at the service of right wing content (family values, nationalism, natalism, law-and-order-ism, agrarianism, etc. - I know I repeat myself, but the truth is worth being repeated, lest lies win by exhaustion).

Not the answer you're looking for? Browse other questions tagged italy fascism or ask your own question.

34
Why did Italy abandon its alliance with Germany in WW1 and join the Allied side?
6
How were city government and law enforcement authorities organized in Northern Italy in the 17th century?
10
Did the Allies benefit, by having Italy fight on Germany's side rather than remain neutral?
2
What did the word "fascist" mean in an early 1930's novel set in Italy?
1
Was Fascism tied to any Specific Ideology Before Nazism and Italy's Fascist Party?
9
Why was Italy unified under the Kingdom of Piedmont-Sardinia and not under a stronger state?
6
Teaching of Mathematics in Italy and in Germany in the fifteenth century