What was the reason for the Ottoman empire to adopt the crescent moon as its flag/coat of arms?

The Ottoman empire used the crescent moon as its symbol extensively. Any reasons for the symbolism?

I have read references to polythesim of Turks contributing to the crescent and star (which predates the empire by hundreds of years), but looking for more detail as to how and why it got adopted during the 12th century.

There seem to be at least two sources of the Ottoman crescent, none of them related to Islam.

1) The standard of the Kayihan Khanate, founded by Osman Gazi (Osman I) in western Anatolia. It is said the symbol on the standard goes back to the seal or tamgha of the ancestral Kayi tribe.

2) The crescent and the star of Byzantion (later Constantinople). Here on a coin from the 1 century BC [Moushmov 3233]

The same symbol is retained when Byzantion is part of the Roman Empire. Here on a coin from the reign of Trajan (98-117) [Varbanov 1638].

One contemporary of Emperor Andronicus was Orhan Khan (the son of Osman Gazi) who conquered most of the remaining Byzantine possessions in Anatolia. He also married Theodora, daughter of Andronicus' successor John VI Kantakouzenos, so Orhans successors as khans and sultans may also have claimed to be descendants of Byzintine emperors.

When Sultan Mehmet had conquered Constantinople in 1453 he claimed the title of Kayser-i Rûm, emperor of Rome. Taking possession of an age old symbol for Byzantion/Constantinople like the crescent and the star might have seen a logical way of reinforcing this claim.

His grandson Sultan Selim, conquered Cairo & the Mamluk Sultanate and claimed the title Khalifa of Islam. This standard of Sultan Selim prominently features the Zulfiqar or sword of Islam, but also - six times the crescent of the moon with a star. 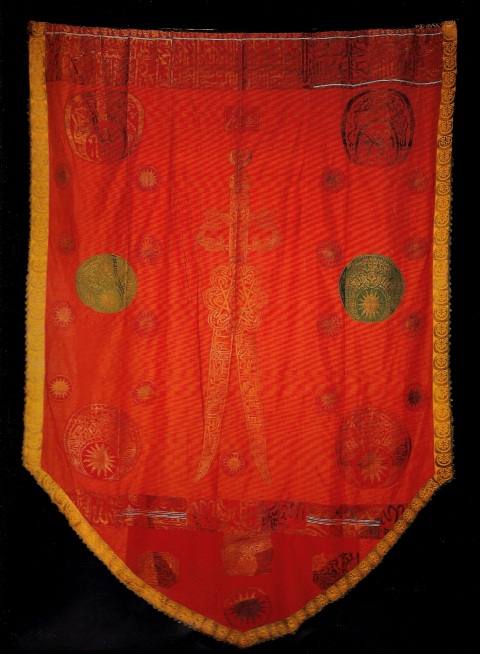 Not the answer you're looking for? Browse other questions tagged islam ottoman-empire heraldry symbols or ask your own question.

6
What was the reason for the Ottoman invasion of Otranto?
23
Why was the bald eagle chosen as the national bird of the United States?
4
What is the symbolism behind the Sauser family crest from Sigriswil, Switzerland?
22
How significant was the Fall of Constantinople as an event leading to the Age of Exploration?
21
Why is Indonesia a Muslim country?
3
What would the Wikipedia page for Spain have said in 1490?
8
What does this Swiss banner/blazon/coat of arms/flag stand for?
3
Why doesn’t Cuba's flag have any communist symbolism?
4
Are the Swiss flag and the flag/coat of arms of Piedmont related?