What did Germany do after World War II to recover so successfully that it became more prosperous than its WW2 victors?

What did Germany do to become more prosperous than its victors after World War II?

Can the troubled European nations of today draw lessons from Germany's history of rebuilding so successfully despite being a loser in both World Wars?

What did Germany do to become more prosperous than its victors after World War II?

The boring answer to that it the rather simple: It didn't. The economy of both Germany and France were devastated by the war, the UK and US economy much less. Germany and France both recovered quickly, and Germany, France and the UK ended up with very similar levels of prosperity.

Germany's industry was of course in a much worse state than France and UK's, but they were able to rebuild it to a large extent thanks to economic help from the victors.

As you see the US beat all of them, and the other major victor, the USSR of course never reached levels of prosperity close to this, but that's because of socialism. 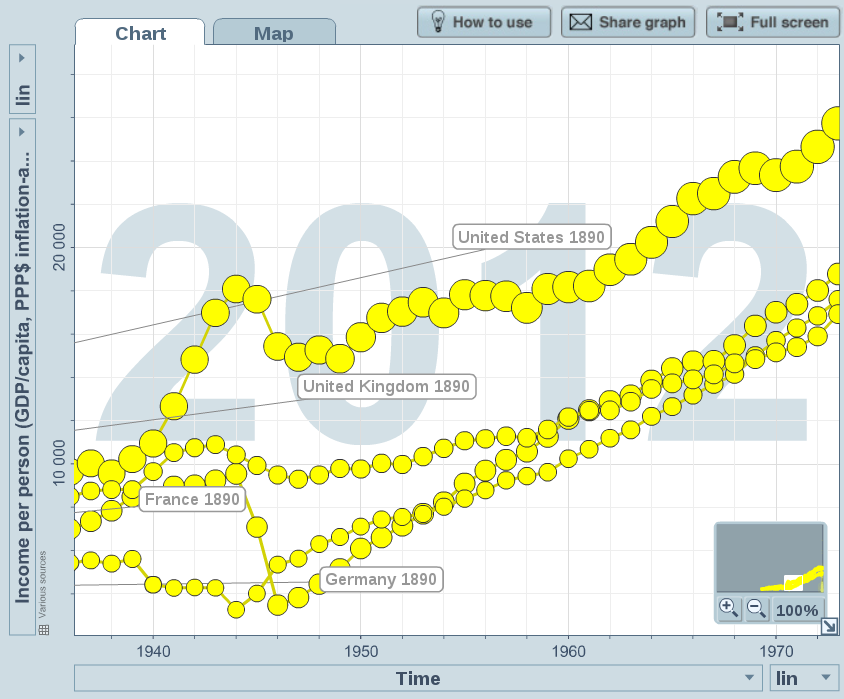 Good question with several answers. First a nod to Lennart for pointing out that Germany grew just like France and Britain and the USA, so a certain amount of "a rising tide floats all boats." However there were some factors that advantaged Germany more than the others:

Finally, a political factor that is often overlooked: Before World War II Germany's middle class had no political home. Instead it was fractured six ways to Sunday. This had led to much political friction over the years, to the point of enabling the Nazi Party to rise to power by grabbing the votes of a frustrated middle class who wanted an end to the chaos. Finally the Catholics and the Protestants joined forces to form the CDU, giving it a solid base of political support to carry out the Economic Miracle. By the same token, the Communist Party was outlawed, and working class politics was united under the SPD. Political stability and the rule of law are seen as essential conditions for the growth of capitalism.

At the closing of WWII the Cold War had already begun. West Germany bordered the Soviet Bloc and became the premier battle ground. Long story short, Sec. George Marshall guilt tripped/spooked congress into agreeing to give very very large amount of their constituents money to Europe. W. Germany and Greece being the two most at risk to shifting into the Soviet sphere, they received the most. ^^^(Turkey was as well, & was a big part of selling the idea yet they did not receive Marshal Plan aid) I think what I'm saying is accurate but I did not check.... Aside from that we were going to do everything possible to help make sure West Germany looked like Disney Land compared to the other side of the Wall. Also Germany, historically is a very innovative society and has been a technological hub --- so with someone else writing blank checks to invest they were able to produce - that's what i speculate anyway.

When the 2ww ended the cold war started.....

The UK, USA, France etc spend a lot of time and effect including using most of their best engineers to create weapons and defenses for the cold war.

Germany was not allowed to create weapons; therefore all their best people worked in industry creating goods that could be sold.

The US and UK also based lots of solders in West Germany, and these solders spend money while there. At least some of the effort in building the bases was then by German workers (that got paid).

Not the answer you're looking for? Browse other questions tagged 20th-century world-war-two economy germany or ask your own question.

17
How did Germany rebuild so quickly after World War I?
11
GDP per capita of major combatants before and after WWII?

23
What were the post World War 2 effects on Germany?
18
Have Germany and Poland ever signed a peace treaty after WWII?
17
How did Germany rebuild so quickly after World War I?
12
Why did World War I victors let Germany pay reparations in German Marks and gave it the option to default via inflation?
10
Were the heavy war reparations on Germany after World War I the main cause of its hyperinflation in 1923?
4
What was the fate of most SS members after World War II?
8
Did Russia declare war on Germany before its invasion of that country on August 7, 1914?
10
If the UK received the highest amount of Marshall Aid, why was it broke?