When did key locks first appear?

When and where did the first metal key locks appear (not the door bolts)?

When did they became widespread?

During websearch, found this material (in Russian), based on the Ian Harrison's book "The Book of Firsts".

According it, wooden lock was invented in the Egypt, and it looked like this: 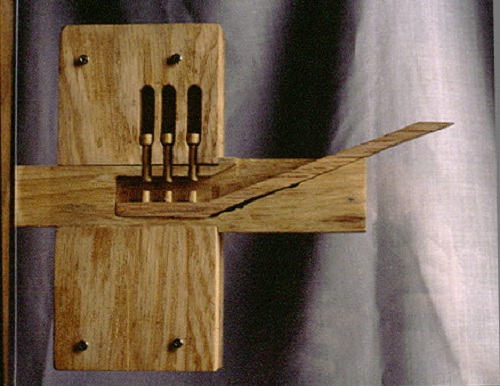 In Rome, people started to use the metallic locks: 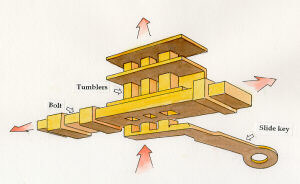 Acccording this, first keys on Papal coat of arms were in 1198, surely after the Romes invented the metallic lock. If you'll check the picture, the keys from it is in somethat similar to the Papal coat of arm's key.

The earliest known key lock is supposed to have been found in Nineveh, and was described by Joseph Bonomi in his 1857 book Nineveh and its Palaces: 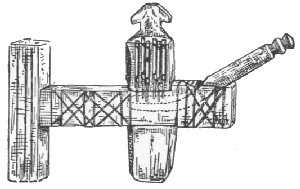 The Wikipedia article on locks states that:

... Locks such as this were later developed into the Egyptian wooden pin lock, which consisted of a bolt, door fixture, and key.

The "Warded Lock" is perhaps the most recognisable form of key-lock today. These locks incorporated "wards", or fixed projections to prevent the wrong key being entered into the lock or turned. The earliest known examples of warded locks come from the Roman period. The evidence from this period seems to suggest that, although the keys were made of metal (usually iron), parts of the lock itself were still made of wood.

All-metal warded locks begin to appear in the late ninth century. This form of lock normally used keys that closely resemble what most people think of when they hear the word "key" today: 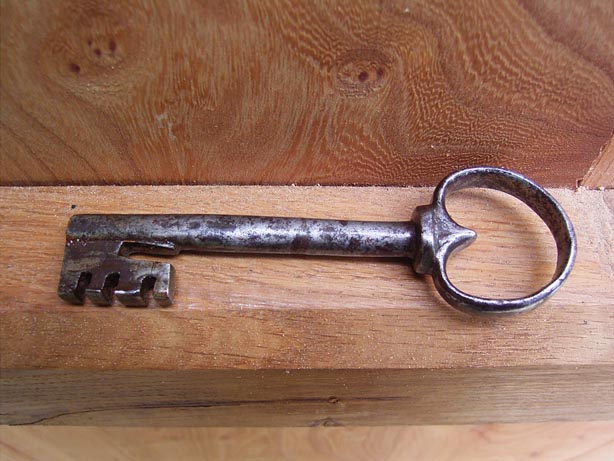 In the article Locksmiths Throughout History they make the claim that:

Warded locks made by English locksmiths in the years 870 – 900 AD were some of the first all-metal locks ever made.

This would correspond to the Reign of Alfred the Great in Wessex. Alfred's reign was characterised by conflicts with Viking raiders and invaders. It is not hard to imagine just how useful an all-metal lock would have been when trying to defend person and property from Viking attacks! If this dating is correct, it is also easy to understand the incentives that might have led to the development of these locks in England at that time.

17
Where was human history first purposely recorded?
23
When did Hinduism forbid overseas travel?
6
Oldest appearance of “brand names” in history?
14
When did Greek historians stop believing Greek mythology to be historical fact?
3
When did cultures start to emerge in ancient Peru?
4
Did Ancient Romans use metal thimbles? What were they like?
6
Did the ancients build elaborate, automated traps?
10
When did Cicero Minor die?