What are the origins of sizing a squad in modern foot drill?

I recently came across this question "What decides who goes in the front rank in a line infantry formation?" and while trying to form an answer to it I realised I was making the assumption that the sizing of a formation in modern foot drill, like many modern drill commands, has its origins in the 1700s/1800s.

It is common (I am hesitant to say this always happens as it has been a while since I did any drill) for a squad to be sized as part of the process of forming a squad in marching order. AP818 (The drill manual of the RAF) states:

The reason this movement is taught is that a correctly sized squad drills betters together and gives a better impression to the spectator.

Stating that a correctly sized squad drills better together is hard to prove, but I can see how it would related to large line formations as used in the Napoleonic era as effective drill was vital.

Note: While I refer to "a squad" this method is also used to size a flight, which is a subdivision of a Squadron. Also, this command is (in my experience) common across the RAF, RN and Army.

Note: This post mostly relates to the British Army (with reference to the RAF drill manual - which is based on the Army's drill manual), but is likely to be common across several nations armed forces for this time period. So answers referring to Commonwealth Nations, the USA, France and Germany (to name a few) may be relevant.

Sizing a squad results with the tallest members to the left and right hand sized of a squad, with the shortest in the middle.

Proper Squad Sizing is important for minimizing loss of trim when the unit wheels. By having the shorter men in the middle take a normal pace in a wheel, the taller men on the outside can more easily stretch their pace to keep the line trimmed. Those on the inside must shorten their pace, but ease of doing that is not dependent on leg length.

The Canadian Forces Drill Manual illustrates this process on page 2-28, from a single rank in which the tallest individuals have formed to the right and the shortest to the left: 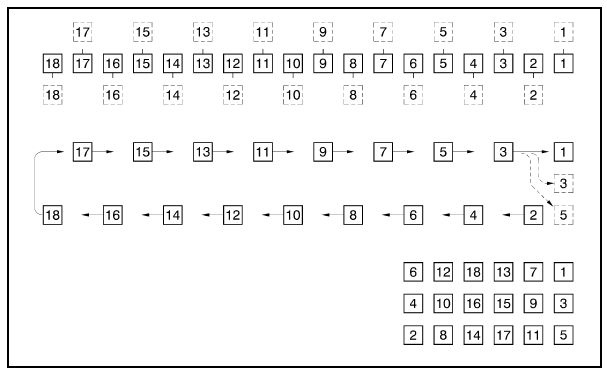 18
What decides who goes in the front rank in a line infantry formation?

12
What Are the Dynamics of A "Forced March?"
9
How Did Modern Weapons Change the Dynamics of City Fighting?
7
What is the motivation of having heavy infantry to the right and light infantry to the left flank?
18
What decides who goes in the front rank in a line infantry formation?
5
What are the modern roles of brigadier generals and commodores?
28
What is the earliest known account of the modern military salute?
8
Why are modern tanks regiments called cavalry?
13
When did the use of "Contact!" by soldiers emerge?
2
When & what are the first recorded peacetime uses of soldiers?