Were soldiers in the World Wars paid?

There have always been professional soldiers however during the world wards there were vast conscription to encourage young men to join up for "King and Country".

Presumably there was some sort of financial remuneration for these men? Even if they were kept and fed while they fought they were the primary wage earners for their families. Were (and if so how were) soldiers in the great wars paid?

All soldiers in all armies were paid during the World Wars, with the sole exception being when prisoners were forced to fight by the people holding them. Conscripts were still supposed to be paid, as far as I've heard.

Now, that doesn't necessarily mean you'd see the money right away, or even at all. Some situations, like being stuck in Bastogne or serving in the Battle of Stalingrad, might limit your ability to receive your earnings for a while, and there are obviously going to be occasional glitches in the system where the payment office thinks you died or something. Plus, civilians fighting to defend their city when it is under siege obviously wouldn't be paid, and I doubt the Germans fighting to defend Berlin saw any money after the collapse of the Third Reich. But even they, in theory, were supposed to be paid.

In fact, I've read some stories about soldiers in certain areas being quite happy with how they were paid: the interviews accompanying the miniseries Band of Brothers, for example, mention that paratroopers were paid double (if I recall) the normal $50 salary of standard infantry soldiers, which motivated a lot of people to sign up for the more dangerous job.

As for how they were paid, that would probably vary from country to country, maybe even from branch to branch, and between the two wars. You'd need to research the specific situation you were interested in for more details.

Here is a pay-scale for British Army junior officers effective on Feb 2, 1940, by experience and commissioned date (Being a British pay-scale, the values are expressed in the contemporary pounds/shillings/pence notation.): 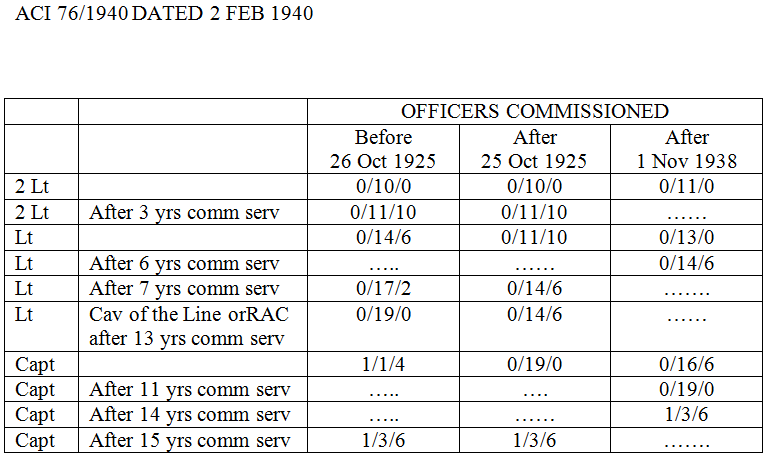 This Answer from Hansard also discusses British Officer's Pay during World War II, in regard to the chart above:

Mr. Law Apart from increments in respect of length of service, differences in the rates of pay drawn by captains arise mainly from the fact that, when the pay scales for the Army were revised in 1925 and 1938, officers already serving were given the option of retaining the old rates, where these were considered to be more favourable. Retired officers and officers of the Regular Army Reserve of Officers were naturally given the same conditions as Regular officers, and officers of the Territorial Army Reserve of Officers the same conditions as officers on the active list of the Territorial Army. My hon. Friend will appreciate that in the circumstances it would not be possible to introduce a standard rate of pay for captains without depriving officers commissioned before 1938 of the rights guaranteed to them under earlier pay scales.

Historical Pay-scales dating back to 1949 for the US Military are also available online.

Not the answer you're looking for? Browse other questions tagged world-war-two military economy world-war-one or ask your own question.

4
World Wars and economic crises?
14
What were the individual soldiers motivated by during World War 1?
3
Which leading Serbs and Croats argued against their own extremists in the wars 1992-95?
15
What happens to the corpses after the world wars?
4
Did British soldiers in WWI on the Western Front get paid in foreign currency?
11
Why did post-Roman rulers abandon tax-paid army?
2
How did people react to these WWI posters with their 'brutal messages'?
8
Did Post-Marian Republic or Imperial Legion cohorts have specific skill levels?