During a class a friend of mine brought up an African Clicking language. I don't have a lot of information about this.

Which language groups in Africa include clicking, and what is known about the cultural and ethnic origins of clicking languages in Africa.

A little background here: there are generally considered to be 5 "races" of man historically native to Africa1: Afro-Asiatic, Niger-Congo, Nilo-Saharan, Pygmy, and Khoisan. Each would have originally had their own native language, and their own native turf: roughly North Africa, Sub-Saharan West Africa, Sub-Saharan Nile Valley, Southern Rainforest, and Southern non-Rainforest respectively. Back then, the Khoisan and most likely the Pygmy languages made generous use of click consonants. The others did not have them.

Sometime around the year 1000BC, the Niger-Congo group acquired Iron age technology, and used it to slowly spread East across the whole continent. At this point, all the people to the south were still hunter-gatherers with no metallurgy. To an Iron age people, this is a huge power vacuum.

History, like nature, abhors a vacuum, so what happened next should be no surprise: One group of the Niger-Congo peoples (who we call "Bantu") quickly moved south and conquered all of the territory that was of any use for their tropical-based agriculture. The Khoisan were left to the desert areas and the far temperate south, but at least kept their click languages. The Pygmy got to keep their jungle, but lost their languages and now all speak Bantu2. So we got left with the language distribution map you see here. 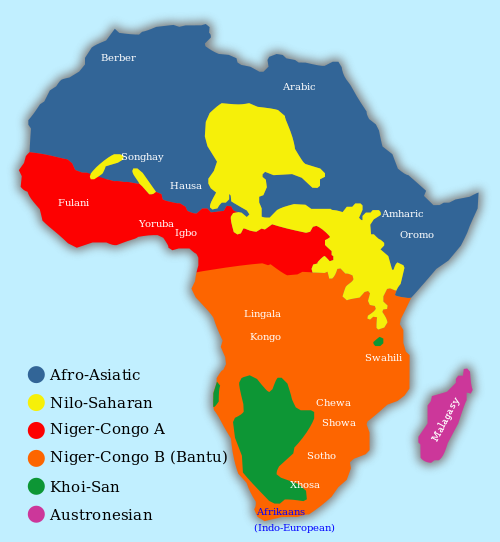 However, the exchange wasn't all one-way. Many of the Bantu languages nearest the Pygmy and Khoisans ended up with some borrowed click-words (which is how we know the Pygmies probably had clicks in their languages). So today what have left are the Khoisan languages, which use clicks extensively, and some Bantu languages which borrowed a few clicks (and sometimes ran with them a bit).

1-Technically speaking all of mankind can ultimately be considered "native to Africa", but all other "races"/language groups spent the balance of their unique development and history outside of Africa.

2-Actually, this may not be completely true. Hadza traditionally has been thrown in with the Khoisan group because of its clicks, but quite recently linguists decided it is an unrelated isolate. Genetic studies seem to indicate that the speakers are related to...Pygmies! So this may actually be our one remaining Pygmy language.

Not the answer you're looking for? Browse other questions tagged language africa or ask your own question.

45
Are there confirmed cases where a country changed its language without being conquered?
15
What are the reasons of the ethnical fragmentation of the Caucasus?
9
Were does Tifinagh come from?
10
What was the standard spoken language (dialect) in the Three Kingdoms period?
3
Old audio recordings showing language change
6
Was there trade among African empires?
27
Which languages would be most useful in Europe at the end of the 19th century?
24
Has there ever been a truly bilingual country prior to the contemporary period?
12
How have African countries kept the boundaries divided by colonists and countries unified for decades, despite the many ethnical groups and conflicts?