Where in Basel was the first Zionist Congress held in 1897?

The Zionist Congresses were held in Basel from 1897 (the first congress) until 1899 (third congress), and many of the congresses after that were also held there. Where in Basel, exactly, was the "congress building" where the congresses took place?

We have a picture of the congress building:

What is the exact address of the "congress building" today? Can one still visit it and go inside?

So, there are numerous referencing to the first Zionist Congress taking place in the Stadtcasino Basel, the Stadt Casino in Basel.

First of all, let's take the picture that you include in the question, from hertzl.org (link to Web Archive; the original link in the question no longer works). That's this image:

So first, going to the English Wikipedia page for the First Zionist Congress, we see that same picture (but slightly higher quality), with the description 'Stadtcasino Basel where the Congress took place': 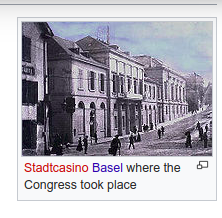 Then, we go to the German Wikipedia page for Stadtcasino Basel, where we again see the same picture: 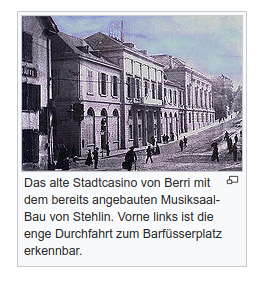 Then, jumping to the 'Bedeutende Veranstaltungen' on that page, which Google translates to 'Major Events', we see this:

Which Google translates as follows:

From 29 to 31 August 1897 the first Zionist Congress took place in the city casino, organized by David Farbstein . The majority of the follow-up congresses also took place here until the foundation of Israel in 1948.

So far that's all from Wikipedia... but it's all unsourced. Let's take a look at some other sources:

From HaAretz, in Israeli news site:

Netanyahu doesn’t have just an earthly transport advantage. He’s a skilled time-traveler capable of eliding 70 years of Zionist history dividing that first Congress in the concert hall of the Basel Stadtcasino, where secular European Jews in evening dress gathered to discuss a distant Jewish state and the young spartan religious Israelis, the “children of Kfar Etzion,” who three months after the Six-Day War returned to the ruins of their parents’ kibbutz south of Jerusalem, which had been destroyed during the War of Independence 19 years earlier.

And from the Jerusalem Post, in an article written by Masada Siegel:

The Zionist Congress itself was held at the Stadtcasino concert hall. It's not officially open to the public, but tourists can often find their way into the main stage area. On the right of the stage there is a plaque that reads: "On Theodor Herzl's initiative and under his guidance, the first Zionist organization was established leading to the foundation of the State of Israel."

...and again, from the Times of Israel, on an article about a canceled event in Basel to commemorate the 120th anniversary of the event:

Prime Minister Benjamin Netanyahu had planned to travel to Basel on August 27 to celebrate the anniversary of the three-day 1897 conference, which took place in the city’s casino and is widely recognized as a major milestone in Zionist history. Over 200 delegates attended the gathering, which was covered by 26 members of the press.

Now, on Google Books, we can see this result from In the Shadow of Zion: Promised Lands Before Israel, by Adam Rovner, who is the Professor of English and Jewish literature at the University of Denver:

At ten in the morning, Sunday, August 23, 1903, the approximately six hundred delegates in attendance at Basel's Stadt Casino applauded and waved their hats when he took the stage.

The 'six hundred delegates' is sourced to NEW MATTER RELATING TO MORDECAI M. NOAH by, G. Herbert Cone, page 132... but looking at the article I can't find anything about that (PDF link).

In The Art and Artists of the Fifth Zionist Congress, 1901: Heralds of a New Age by Gilya Gerda Schmidt, who has a PHD in Comparative Religion and is a faculty member at the University of Tennessee Knoxville, we see this line:

Writes Berkowitz, "The First Zionist Congress had hung portraits of proto-Zionists in the hallway of the Basel Stadtcasino, but this exhibition of Jewish art, under the auspices of the Zionist Movement, was clearly the first time that the works of Jewish artists were being presented in a Jewish national context in Central Europe"

And just as a bonus, on the Jewish Encyclopedia, they also have the same location:

An international Zionist convention held at Basel on Aug. 29, 30, and 31, 1897, in the Stadt Casino, and which was called at the instance of Dr. Theodore Herzl. It was attended by Jews from all parts of the world, its purpose being to consider how best to relieve the misery of the Jews, particularly those of eastern Europe, Russia, Rumania, and Galicia, who had suffered so much, both morally and materially, through the anti-Semitic movement. The second Basel Congress met Aug. 28-31, 1898; the third, Aug. 15-18, 1899. The fourth Congress was transferred to London, where it took place on Aug. 13-16, 1900; the fifth was again held at Basel, Dec. 29-30, 1901.

TL;DR: All of the sources that I could find agree that it was held at the Stadtcasino in Basel.

Not the answer you're looking for? Browse other questions tagged jews zionism switzerland or ask your own question.

18
How was Israel able to build a powerful military within days of the formation of the state?
12
In what language was the first Zionist congress in basel in 1897 held?
3
Where was the Temple of Onias located?
15
How many Bolsheviks were Jewish?
6
What rights did women have in Switzerland in the first few years of the 20th century?
76
Is there any evidence to support the claim that the United States was “suckered into WW1” by Zionists, made by Benjamin Freedman in his 1961 speech?
5
When the Swiss Guard was formed, was the height requirement 174 cm (5' 8 1/2")?
9
Was the Bundesbrief a forgery?