Was smoking ever considered a throat cure?

In the movie The King's Speech Prince Bertie at some point says his doctors had advised him to smoke, in order to improve his throat's condition.

Does this stupid suggestion represent actual medical consensus of the 1920's or were the screenwriters just being creative?

Asthma cigarettes were an actual treatment at the time - I don't know if the scriptwriters, or history, knew whether the prescription was for tobacco or stramonium cigarettes. It's unlikely anyone believed tobacco had any medical purpose at that time, though its dangers were still largely unknown.

Stramonium, on the other hand, was a well known cure for asthma or other issues with swelling or inflamation of the throat or airways. Also known as thorn-apple cigarettes, they were packed with the dried leaves, flower and fruiting body of the Datura Stramonium plant (aka the thorn-apple). The smoke of the plant contained beladonna alkaloids which acted as an anticholinergic - the physicians may have hoped whatever was causing his stutter would react in the same way to the asthma cigarette as a bronchial tube spasm would.

In the United States, we have specialists who treat lung conditions called respiratory therapists. My mother was one in the 1990's and she said it was very difficult to convince many elderly patients with asthma to quit smoking since they had been told by their doctors in their youth it improved their asthma. She dealt with hundreds of patients with lung conditions, most who would have been young in the 1920's–1940's. I think this is pretty good proof that this odd medical advice was indeed given.

Smoking causes the airways to constrict, so it can reduce some symptoms of asthma such as wheezing, even though the person is less able to breathe, so it is bad for them and can cause a lethal asthma attack. Quitting smoking also temporarily causes coughing fits as the airways open up, so you can see why these people were skeptical. I imagine this is how such wrong-headed medical advice became orthodox.

People thought it was so good for the lungs, you can see the cyclists in the Tour de France smoking along the way in now iconic photos from the era.

Example from that search: 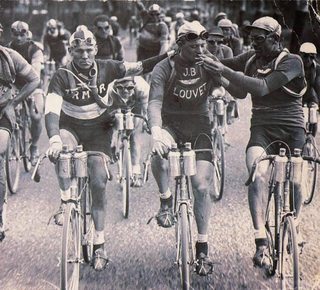 As many smokers might know, this herb will sooth the need to cough. A need that it itself contributes to. Short time effects in a habituated individual are the opposite of its long term effects. Believing in a effect you can experience yourself is not difficult.

When this herb was "discovered" by the Europeans they quickly inquired into all of its properties. Being a sacred plant to the Americans ("Indians") used in many healing rituals, this knowledge traveled back, and was adopted.

Tobacco was a true wonder drug, capable od soothing everything, curing everything. Although the Americans thought of its mode of action in much more spiritual ways, the Europaens were much more mechanistic in their understanding.

Nicolás Mondardes (1519–1588), a well-known author and doctor living in Seville, was the first European physician to unabashedly pro- mote tobacco as a medicine. In 1571, in the second part of his widely read compendium of New World plants, Mondardes highlighted tobacco’s healing properties.

Monardes had published a detailed study of all the plants brought back from the Americas to that date titled Joyfull Newes Out of the Newe Founde Worlde in which he prescribed tobacco for almost every common ailment of the time, including toothache, carbuncles, flesh wounds, chilblains, “evill” breath, headaches, and even “cancers” (Monardes 1925), and so provided all the medical justification needed to suggest that the search for the miracle cure-all was over. Thus, in the early stages of the modern era, tobacco was widely understood to be a “divine sent” medicinal remedy (Pego et al. 1995).

Over time, tobacco’s reputation as a miraculous drug diminished, and by the eighteenth century tobacco use in Europe came to be recognized as primarily recreational. Nonetheless, nicotian therapy continued in Europe well into the nineteenth century. In 1800 European physicians were still using tobacco as an antispasmodic for asthma, an enema for intestinal obstructions, and as a diuretic for dropsy and similar disorders. Some even continued to advocate its use as a prophylactic against infectious diseases such as cholera well into the 1890s.

Smoking anything was an official cure for Asthma and other conditions of the throat and lung. While the main ingredient was tobacco, several other herbs were added to increase the effect. Among them belladonna, datura, and our new wonder drug: cannabis. Examples are numerous. These were sold in pharmacies until the 1970s for West-Germany and a little longer in the East. But since the question seems to be about pure and ordinary tobacco cigarettes… 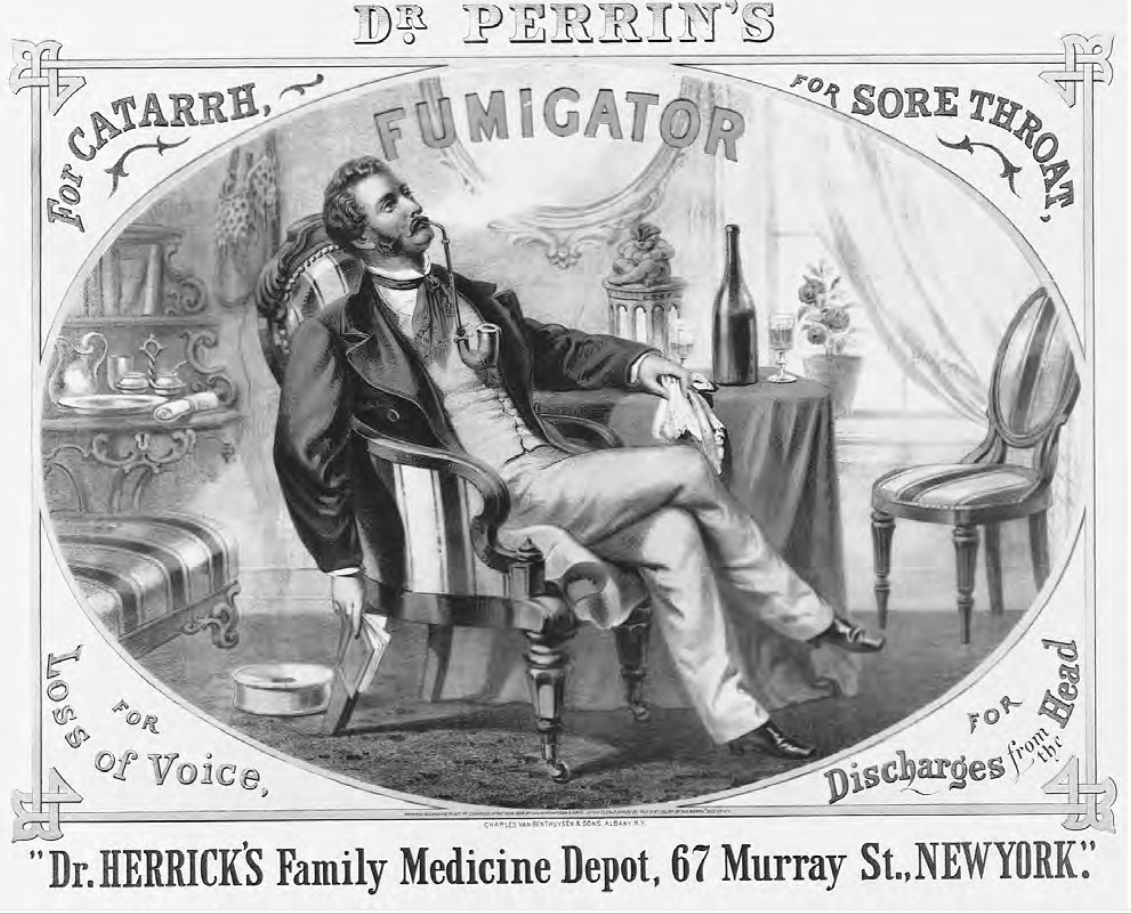 This 1869 advertisement for Dr. Perrin’s “Fumigator” is promoting the smoking of tobacco as a remedy for catarrh, sore throat, loss of voice, and discharges from the head.

For the most part, by the nineteenth century tobacco appears to have become primarily a folk remedy used in the home rather than one commonly prescribed by classically trained and highly skilled physicians.Goodman05

While most of the established medical science community started to see some potential dangers, like from high doses of isolated nicotine, or just to much soot buildup, on the whole they just started to slowly doubt the benefiical effects from inhalation of the pyrolisation products of this material.

That doesn't mean that folk remedy took completely over and forced scientific medical wisdom onto a back bench. Tobacco found a new ally to promote its virtue (and total harmlessness): advertisers.

In 1927 Philip Morris, one of the smaller cigarette manufacturers of the time, advertised one of its brands, Marlboro, […]. Lucky Strike entered the fray on two fronts: it solicited and printed testimonials from European artistes who informed the reader that they had discovered their favourite cigarette in Lucky Strike, a cigarette that was mild and mellow and because of a special process that treated the tobacco—‘It’s Toasted’— Luckies protected your throat.Goodman93

And the same trend continued well into the 50s, when scientific medicine finally started to convince the public – and its own members – of the detrimental effects and dangers of smoking.

After the cancer link was published in Reader's Digest…

The industry initially responded with denial and buck-passing. “You hear stuff all the time about ‘cigarettes are harmful to you’ this that and the other thing,” Arthur Godfrey reassured his television viewers in September 1952. Not to worry. Chesterfields wouldn’t harm your nose, throat, or “accessory organs.” A responsible consulting organization and a competent medical specialist had vouched for it.Courtwright

Which specialist may have vouched for it? Well, some did. 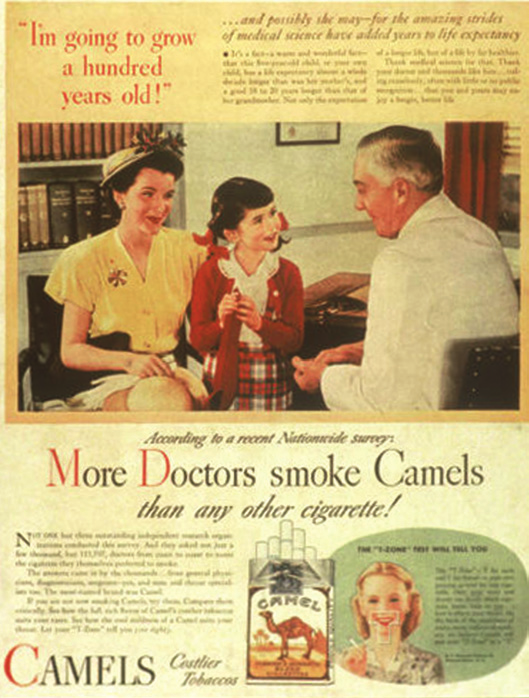 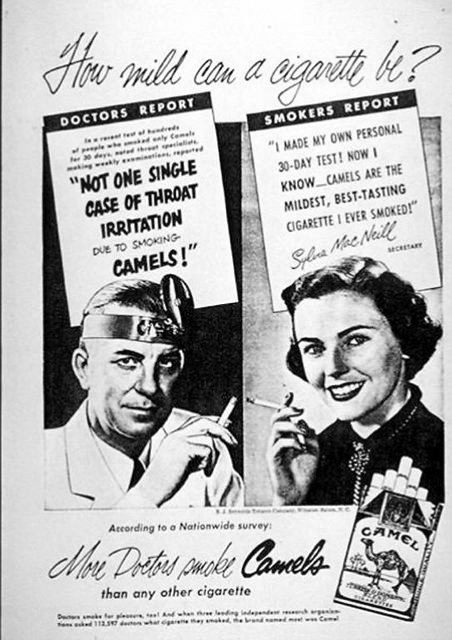 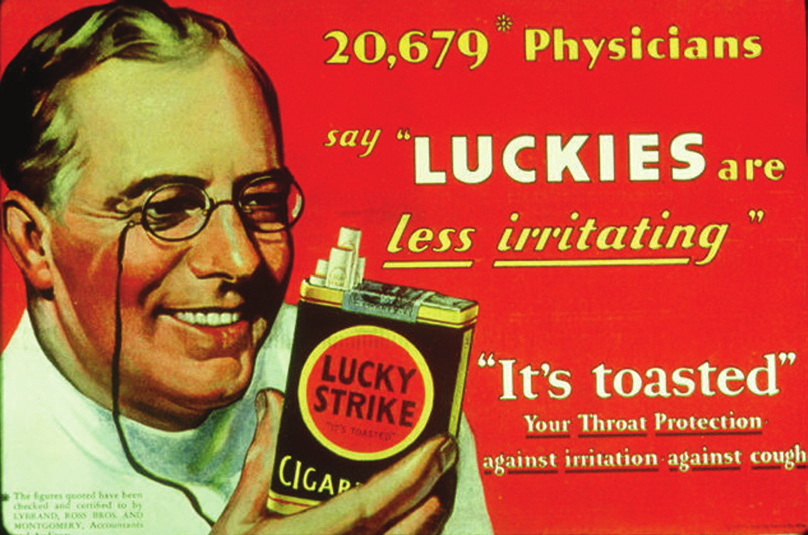 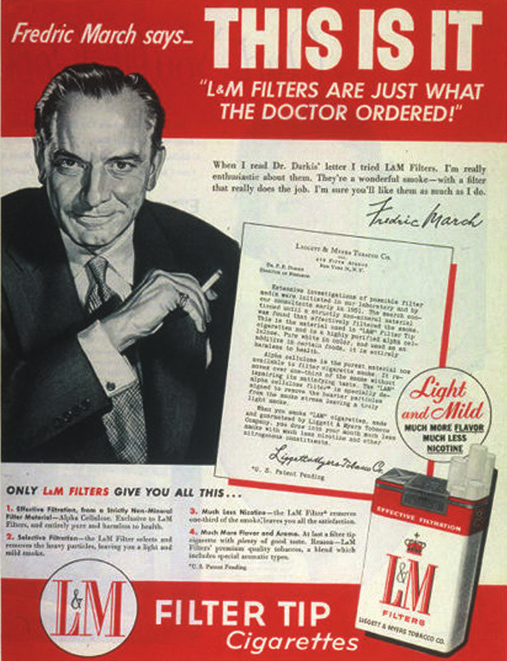 Not every doctor is always at the forefront of knowledge in scientific medicine or not even just up-to-date, today. Some were bought, some are. In the film's setting of the 1920s, this looks entirely plausible. Old knowledge not yet completely gone, new dangers not widely known or accepted as proven, the continued use as a folk remedy and the onslaught of advertisers play nicely together. It might have been an allusion to a real doctor recommending it, a play on the then common advertisments or a signal that a royal was vulnerable to bad advice, whether from quacky physicians or advertising. Additionally it might be completely plausible that Bertie just lied: "It's medicinal."

Not answeering the more global issues from the question, but what led the king into his habit and addiction: When Cigaretts were Acceptable a physicians perspective in: Under the Knife: A History of Surgery in 28 Remarkable Operations and from a biography George VI

It's anecdotal and a sample size of just one, but a good friend in high-school suffered from cystic fibrosis. He smoked from a stated firm belief that the smoke relieved the mucous build up. As he wasn't expected to live much past 30 anyways, lung cancer was the least of his concerns. As it was he lived to the ripe old age (for a CF sufferer) of 42.

Not the answer you're looking for? Browse other questions tagged 20th-century england medicine 1920s or ask your own question.

18
What was the contemporary German public opinion on the Herero Genocide?
10
What was it like to have type 1 diabetes in the early 20th century?
24
How common was smoking in first half of the 20th century?
13
What's the story behind this photo of hikers who brought white plague cure to President Wilson?
6
When penicillin was initially introduced, was it effective against all gram positives?
2
Was smoking allowed aboard hydrogen-filled zeppelins?
32
Was England considered a “colony” of France?
2
In the 1920's, why did the German government fire working women if their husband was employed?
2
When was it considered fact that rats caused the Black Death?
4
What is the earliest reference to King Arthur being raised by Sir Ector?