The map drawn by Diego Gutiérrez in 1562 shows both North and South American shapes (borders). How did he (or the 15th century Europeans) know the shapes of the American continents and their geography in such detail at that time?

Sure, a lot of things are correct, but a lot of things are incorrect. The question then is how they could know the general shape of South and Central America at all, and the reason is simple: They had been there. Once people realized that Columbus didn't reach Asia, but discovered new land there was a large-scale effort by Spain to explore and map the new lands, which Spain had claimed for itself.

As Spain did not claim North America, they didn't make such an effort to explore it and map it. Therefore North America is mostly blank on this map, and the west coast is completely missing.

A lot of things on the map is also simply guessing. For example, the Amazon river is on the map. But as it's not explored, it's just shown as a big snake, which is not how it looks at all. They knew there was a huge river, because they had explored it's mouth, but that is all they knew.

You can also see that the southernmost tip of America is completely wrong. The southern end of America looks like a narrow straight, with another big landmass to the south, and it might easily be thought that this is Antarctica. But in fact, what is shows is the Straight of Magellan with Tierra del Fuego to the south. It was believed up until 1578 that the Island of Tierra del Fuego was a part of a larger landmass, possibly the mythical "Terra Australis".

So here is an overlay of the Gutiérrez map with a modern equirectangular map: 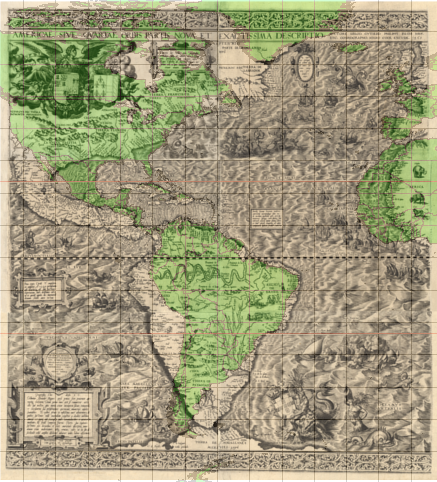 Not the answer you're looking for? Browse other questions tagged americas exploration christopher-columbus or ask your own question.

16
How did former Spanish colonies in the Americas become so fragmented?
20
How did people realize that America was a different continent?
35
Did anyone in Europe predict the existence of the Americas?
32
Why does Latin America have a higher number of surviving Native Americans than North America?
16
How densely populated were the Americas prior to European colonization?
1
Native peoples of North and South America impressions of Europeans
5
Did Woodland period Native Americans seek/value gold prior to European Colonization?