What historical reasons did the Nazis give for hating the Jews? How did they identify non-practicing Jews?

What historical or cultural reasons did the Nazis give for hating the Jews? Did they ever accurately and precisely identify non-practicing Jews?

I asked Jewish culture differences singled out by Nazism? on Judaism SE and they said that for a secular reason to Nazi prejudice I would have to ask here.

The Jews were targeted not because of their religion but on basis of their supposed 'racial characteristics'.

According to the science of the day, eugenics, this could be easily detected based on parentage and physical characteristics.

Thus marriage and birth certificates were a major source of information, and where that wasn't conclusive (say immigrants), actual measurements of things like the slope of the forehead and the dimensions and shape of the nose were used (and in many cases pure speculation, just like in the past just accusing someone of being a witch made them a witch, nowadays the same process is responsible for putting many a person behind bars for being a pedophile who never touched a child).

The main reason for the persecution was economic, combined with historical prejudice (that was and still is deeply rooted throughout Europe). The German economy was in tatters, but the Jews were as a group doing a lot better than the population at large. When the government needed a scape goat, they were a logical group to target.

Mind this wasn't at all limited to Germany, the same went on in many countries, foremost of all the USSR.

Historically of course the Jews were strangers, with weird customs, rather insular, with a different religion, in countries that were very much homogenous in their cultural and religious makeup (and to a large degree in many countries largely racially homogenous as well). That set them apart, people were suspicious of them, and the Nazi propaganda built on that to blame them for the economic woes of the late 1920s and 1930s (the fact that many banks were owned by them, and Jewish owned businesses doing overall better than German owned businesses made that easier).

As far as your first question, you can read the Nazi's complaints against the Jews in any number of books, such as "My Struggle" by Hitler.

Regarding the second question, the identification of "non-practicing" Jews, let me first of all say that jwentings answer that they were measuring their foreheads is just nuts and has no relationship to reality.

In old Germany, everyone was heavily documented and had to carry around a book with them that listed everything about them including their places of residence, their occupation and place of employment, their religion and their parentage, so it was well-known whether a particular person was Jewish or not just from their passport. If you did not have a passport, you automatically got arrested. The criteria for being a "Jew" was if any one of your 4 grandparents was Jewish. If your passport said you (and your grandparents) were baptized Christian, then as far as the authorities were concerned, you were Christian.

Just to give you an idea of how anal and totalitarian they were about it, you generally needed at least three kinds of documents: the passport, basically containing your life history, a residency permit and a work permit. The residency permit described you physically and was needed to prove you had a right to live in a place. So, for example, if you had a residency permit for Coburg and were stopped in Hamburg, they would ask "What the hell are you doing here?" and you better have a good answer and documentation to back your answer up. The work permit (called an "arbeitsbuch") listed your employment history and any important details (like getting fired).

Below is a page in an "Ahnenpass", meaning an ancestor addendum to a passport listing your ancestors: 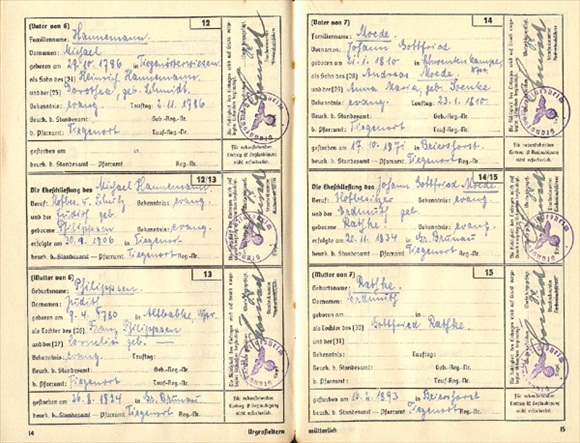 In cases of someone without papers, they would try to figure out who you were, and generally would imprison you until they knew who you were. In cases of foreigners, like Russians, they would rely on the locals to tell them who was Jewish or who was not. Also, in Russia, the Jews tended to exist in specific communities, so the Germans would assume you were Jewish if you lived in such a community and would assume you were Christian otherwise. In the case of a foreigner captured abroad, like on a road without papers, if it was a male they would see if the person was circumcised and that would be the deciding factor. If it was a female, alone and with no males (a highly unusual case), it would be at the discretion of the arresting officer to decide where to send her, but in most cases the Germans did not bother arresting random refugee females without a specific reason.

There is a funny story about Alekhine, the famous chess player. He tried to cross the militarized Polish-German border in 1937 without papers (!!!) When the police questioned him, he said "I am Alexander Alekhine, Chess Champion of the World. This is my cat. Her name is chess. I require no papers." Of course, they arrested him.

1) "What historical or cultural reasons did the Nazis give for hating the Jews?"

There were several different "official" reasons given by the Nazi regime to encourage hate towards Jews. One of Joseph Goebbels's most famous propaganda films "Der Ewige Jude" (The Eternal Jew), which claimed to be a documentary, portayed Jews as hordes of rats. This film was shown repeatedly at theaters and was required viewing at all schools.

In the film, rats were shown scurrying out of a sewer as the announcer states "as rats are the vermin of the animal kingdom, Jews are the vermin of the human race and similarly spread disease and corruption." The film then shows shots of Jewish people in the Warsaw ghettos who were deliberately chosen to be poorly dressed, dirty and who had partially toothless grins. The announcer then goes on to say Jews have the uncanny ability to change their appearance and blend into their "human hosts." A scene depicts four bearded men in traditional religious Jewish clothing, then shows them shaved and in modern business suits, while the narrator explains that only a "trained eye" can distinguish their Jewish features.

These type references and comparisons continue throughout the 62 minute film. The propaganda in this and other Nazi productions were designed to play on the existing misconceptions of many European citizens.

It was Hitler's belief from 1919 that Germany was defeated in World War 1 because the elite, and most wealthy of German--and the allied countries--society was dominated by capitalist Jews. He believed they conspired together to sell the country out (See Mein Kampf).

From Hitler's earliest political campaigns, he had made it clear that many of the economic challenges the Weimar Republic faced before the 1929 Wall Street crash were a result of the crushing debt of German war reparations (The World at War). His view was since this debt was a result of the Jewish conspiracy, it was not valid and should not be paid.

Hitler also believed that America, Britain and France were controlled by capitalist Jews. He thought that they worked together, with their only concern being for profits. He believed these Jewish conspiritors put profits ahead of anything else, including the well being of their country's own citizens.

2)"Did they ever accurately and precisely identify non-practicing Jews?"

The Nazis did not make any distinctions between practicing and non-practicing Jews. In most cases, the determination between full Jew, half Jew and quarter Jew was based solely on the person's grandparents. The only distinctions made were in the case of some German citizens who were given some limited rights as quarter Jews.

How they identified Jews:

The separation between State and religion was still incomplete in Weimar Germany. To the point, the register of newborns was a task the State delegated to the various religious denominations.

If your parents were Lutherans, they would register you at the Lutheran Church, and you would be by definition a Lutheran, until you formally converted to other religion. Even if you didn't believe in God, never went to the Church, etc.

The same went for Jews. A Jew was a person registered at the Synagogue. Thus the Nazis didn't need to question you about your religious beliefs or verify your attendance to religious services: if you were registered as a Jew, you were a Jew. Of course, they then mixed that with their racialist superstitions, and decided that conversions from Judaism to other religions were invalid, and that if you had parents and grandparents registered as Jews, you were a Jew, even if you happened to be registered as Lutheran or Catholic.

What reasons they gave for persecution:

A mix of conspiratory views about Jews (they control all the banks, and the banks control all governments, which in turn control all the people) and racialist pseudo-science(1), according to which the cultural characteristics of the Jews were in fact biological, so that education or re-education could not erase the "Jewish" nature of an individual who was "racially" Jewish.

Note: (1) To us, now, it is quite clear that views of that kind are pseudo-scientific. At the time, they had scientific prestige, and were taught as scientific anthropology.

0
Why did Hitler hate Jews?

9
Are there any independent historical records of ancient Persia allowing freedom of worship for the Jews?
11
How did the Falasha make contact with Jews outside Ethiopia?
2
What were the civic privileges created for the Jews by Porcius Festus?
3
How and when did Jews get to the shores of the Baltic?
12
How did the Nazis view Dickens' Oliver Twist?
24
Nuremberg Laws - Did they affect existing marriages between Jews and Non-Jews?
5
What did the Nazis do with proselytes to Judaism?
12
Did the Nazis identify as being Fascists? How exactly did they view themselves?