Has this newspaper printed the wrong picture (as well as a baffling caption)?

Yesterday's Daily Express decorated its WW1 piece with a picture and caption. Link to the story here. 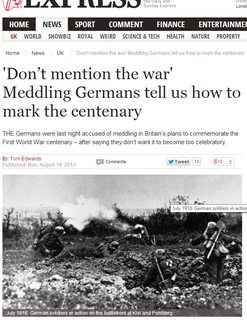 As @philipoltermann points out there was surely no fighting near Kiel during WW1 (except perhaps for revolts/mutinies within Germany's armed forces) and where or what is "Pohlberg"? The "Kiel-Pohlberg battlefront"?

But leaving aside the caption is this picture even WW1? Helmets and kit look suspiciously WW2 era.

The Daily Express just took the caption from Getty Images without substantial modification. Regarding Pohlberg, see the german wikipedia on "Pöhlberg". The Pöhlberg is a mountain in saxony; according to wikipedia, the name was applied by the german soldiers from saxony also to a mountain near Reims / Moronvilliers (maybe this one - there's still a "Camp militaire" at Moronvilliers). So, also Kiel may be a denomination used by the german troups to denote a place in the vicinity of Reims. The date given at Getty images (July 1918) seems to be plausible, since in that time, the western front was near Reims.

EDIT: "Kiel" may be a misreading of the original caption mentioning two mountains near Moronvilliers: "Keilberg" (not Kiel...) and Pöhlberg. Originally, "Keilberg" is a mountain in saxony, too. German military used the names Keilberg, Pöhlberg and Hochberg (fr. Mont-Haut) for some hills south of Moronvilliers, while the french used "La Casque" and "Le Téton". I'm not sure which of the names used by the germans correspond to the french names. But IMO, it's very likely that the original caption was

"... at the battlefront at Keil- and Pöhlberg in West Chapagne".

These are early model Stahlhelm (shape changed over time, see Yannis' comment) from WW1.
Also, they carry large shovels, not the more modern collapsing trenching tools a WW2 soldier would have had.
And they carry gasmask cannisters, something not carried in WW2 (except maybe in the very beginning).
There was indeed no fighting in northern Germany during WW1, but there was the 1918 German revolution which started in Kiel when the Kriegsmarine refused orders to sail. The army was deployed there and there was heavy fighting with rebels. This revolution eventually resulted in the proclamation of the Weimar Republic and the end of the German empire.

Not the answer you're looking for? Browse other questions tagged world-war-two germany world-war-one or ask your own question.

3
Has the feminization of the labor force continued after WW1?
10
Who are the WWII German Officers in this picture?
3
What is the evidence to repudiate this version of the "stab in the back" myth?
14
What was the largest land area that Germany has ever controlled?
10
Distinguish Mitsubishi G6M1-L2 and G4M1 aircraft in this picture
0
At the end of WW2, multiple German leaders either committed suicide or made preparations to do so -- was this unprecedented?
1
Can anyone help ID the probably World War One, Austrian, Italian, or Czech uniform in the picture?
8
When was this picture taken?