I was wondering the security of such documents. Documents like letters written by the British generals to each other communicating about their next battle tactic against the Americans. See this link.

My question is, how advanced were the encoding methods back then used to send important information so it doesn't get into the wrong hands? Also, sometimes a message may be sent as a trap with the intentions of purposely fooling the enemy into thinking something else. How would one today figure out if that was true or not looking at them today? What about the intelligence back then? They relied solely on these documents to figure out stuff.

Both American and British used similar tactics to protect and discover sensitive information during the war. The United States however proved better at it which gave them a and perhaps the decisive edge in the war.

George Washington while an officer in the British Army during the 7 years war ( French and Indian War ); had learned how important obtaining sensitive information and protecting your own information was. Early on in the Revolutionary War, Washington was very interested in recruiting spies and learning everything he could about his British opponents. He created very sophisticated networks of specialists to run and control rings of spies he employed in occupied British held territory all geared to preserving secrecy.

Among the tactics employed in the American Revolutionary War:

Question: #1 How advance were the encoding methods back then used to send important information so it doesn't get into the wrong hands?

On the American Side:
Not very advanced surprisingly enough. Encoding a message was geared towards fooling unsophisticated inspections. Different techniques in addition to Encoding were used in conjunction which altogether provided some protection but again mostly geared towards untrained or unsuspecting inquiry. It was important that whatever codes used would be simple enough that they could be de-coded. And since both sides processes had to be done by hand(encoding and decoding) they also needed to be relatively simple to perform.

Invisible Ink The first layer of protection was stealth, invisible ink used by both sides would be used to write inside book bindings or between the lines of innocent correspondence or commercial documents. Innocent documents which the Americans hoped a busy sentries would not inspect too closely. Since both parties used invisible ink, it was not considered a full proof protection and would not stand up to anything but rudimentary inspection. The key or decoding mechanism for solving invisible ink being heating the page was common knowledge on both sides of the Revolutionary War. Washington would try to address this by commissioning a new invisible ink one who's key was a chemical solution rather than heat, but that ink was rare due to a lack of ingredients.

The reason why the code book was not particularly secure is because it was constant throughout the war. So it too could be defeated over time given enough intercepted messages.

Cyphers Encoding text was typically done with straight alphabet cyphers and would be used in conjunction with the codebook to obfuscate words or names which were not in the shared codebook.

The reason why such Cyphers were not particularly secure is because even if the cypher is random letters in English were not random. A sophisticated codebreaker can crack such a cipher given enough text to examine. Given the cyphered text a code breaker already knows how many letters are in the plain text being protected. Given enough text he can identify vowels as they occur more frequently than consonants. Given the vowels and enough text consonants can be guessed.

Masks which would over-layed a seemingly harmless letter which would then reveal a concealed message. 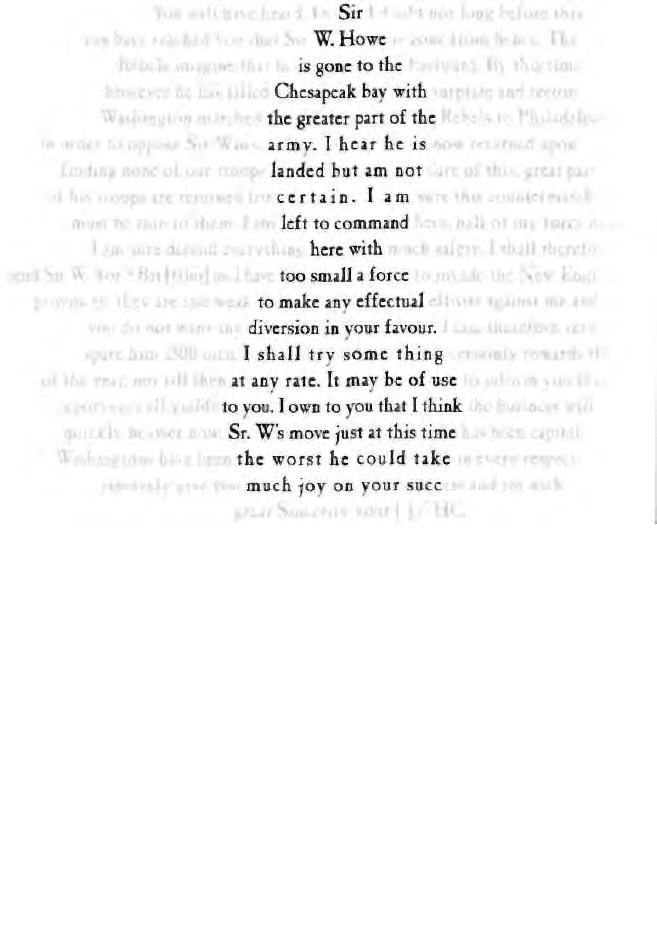 George Washington Spy Master The British often used a "mask" to keep their messagessecret. Hidden within what looked like an ordinary letter was thesecret message that was only revealed when the reader appliedthe mask. The writer might send the letter by one rider going byone route while another rider carried the mask on another route.Such letters had an extra advantage: The writer could includefalse information in case Americans intercepted the letter.

In the summer of 1777, British General Sir Henry Clinton, inNew York City, had to keep in touch with General JohnBurgoyne, whose troops were heading down the Hudson Valley,and with General Sir William Howe, who was supposed to link upwith Burgoyne but instead had chosen to take Philadelphia.

Howe believed that "friends of [the British] Government"along the Hudson would make Burgoyne's task easy. But alongthe Hudson there were also many enemies of the British. APeekskill man, for example, although paid to be a courier forBurgoyne, handed the general's message to the Americans. OtherBritish couriers who rode south were never heard from again.General Clinton, concerned about what General Howe wasplanning and doing, made use of a mask to write a secret messagein a letter to General Burgoyne.

Before writing the letter, Clinton had placed an hourglass-shaped mask on a piece of paper and then had formed the secretmessage within that shape. The unmasked letter had enoughfalse information in it to fool any American who happened tosee it. But when Burgoyne viewed the letter with the mask, heread Clintons view of the real situation: Howe has made a badmove; I don't have enough men to do anything about it.

The British would write messages on silk pieces of cloth and then compress these scrapes of material in small secret compartments. Like the inside of a hollow writing quill. Or in one case a small hollow ball about the size of a musket ball.

George Washington Spy Master Clinton used another device to pass the news of his where-abouts to Burgoyne. Clinton wrote a message on a piece of silk that he put in a silver ball about the size of a musket ball. (Clinton also sometimes cut a message into long, narrow strips and coiled them into the hollow quill of a large feather.) Clinton gave the silver ball to Daniel Taylor, a young officer, promising that Taylor would be promoted if he got the message to Burgoyne. If he were captured, he was to swallow the ball. Because it was made of silver, it could not harm him.

Taylor had not gone far before several soldiers jn red uniforms stopped him. Believing he was in friendly hands, he said he had a message from "General Clinton." But what he didn't know was that the smiling soldiers were Americans, wearing uniforms swiped from a British ship. They took Taylor to a "General Clinton" who happened to be an American general named George Clinton.

"I am lost!" Taylor cried and swallowed the silver ball. A doctor gave him a strong drug called an emetic, which made him vomit up the ball. Taylor grabbed it and swallowed it again. When General Clinton threatened to kill him and cut his stomach open, Taylor agreed to take another dose of medicine and once again vomited up the ball. The message inside said"...nothing now between us but Gates." This meant thatClinton believed that he, coming from the south, andBurgoyne, coming from the north, were about to trap anAmerican Army led by General Horatio Gates at Saratoga, New York.

But now the Americans knew what was afoot, and they were ready. On September 19, 1777, Redcoats under GeneralBurgoyne clashed with American

Question #2: Also, sometimes a message may be sent as a trap with the intentions of purposely fooling the enemy into thinking something else.

Here is what I found on Disinformation.

Mount Vernon, Espionage Tactics
As a spymaster, Washington also emphasized the spreading of misinformation to confuse the enemy and buy his army time to prepare for battle and gather adequate supplies. For example, in 1775, was when Washington discovered a severe gunpowder shortage in Cambridge, Massachusetts. To prevent British spies from relaying this information to their military commanders, Washington ordered the gunpowder kegs to be filled with sand and moved outside Boston. Changing the kegs' weight led the British to hesitate, believing the Americans sufficiently equipped to defend Boston, which allowed Washington time to resupply his troops.

On another occasion, in Morristown, New Jersey, in 1777, Washington intentionally arranged his troops in small, scattered groups to create the impression of a larger military force.

Question #3: What about the intelligence back then? They relied solely on these documents to figure out stuff.

Washington Employed many spies in the Revolutionary War. The most successful of which was the Culper Spy Ring, none of whom were ever apprehended. Captured Documents, first hand accounts of preparations or British actions from spies were all actionable information.

Not the answer you're looking for? Browse other questions tagged british-empire american-revolution espionage or ask your own question.