Are the swords in the Oath of Horatii all Roman?

In looking at the Oath of Horatii image 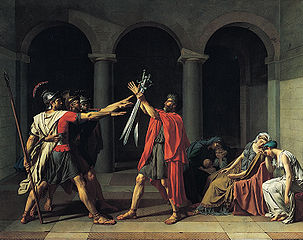 I can see three swords in the hand of the father, I see what looks to be a gladius in the center, but the two swords on either side of it do not look to be Roman swords. They resemble scimitars or some such similar sword, not what I would consider Roman. My impression of Roman swords tends to be the gladius and if they used other types I am not aware of them, so are the other two swords Roman?

I realize this painting is Neoclassical, although with many of the details look to be very accurate the swords stick out to me as being a sort of artistic license here; but I would like to confirm with anyone who has more knowledge of Roman swords.

art sword roman-kingdom
Share
Improve this question
edited May 21 '13 at 10:26

As for the Roman Military they used a gladius you suggested as their main fighting tool. To back up my answer this site has pictures and summaries of roman weapons etc (None of which seem to resemble a scimitar).

There are two types of these:

The first being the original shorter Gladius Hispaniensis. The second being the more pointier Gladius Pompeianus

The Roman Military was also outfitted with a Spatha which was a much longer sword.

With neither of the swords in the picture resembling a gladius in my opinion the only option could be a spatha. A quote from the above linked site.

The Roman cavalry used a much longer sword, the so called spatha. Towards end of the second century that spatha gradually replaced the short sword also for the infantry. Lengths 75 cms and longer. The shape of the blade is not easy to distinguish from the Germanic swords of the period. With two exceptions: The first century spatha looking like a longer galdius Pompeianus and the later thrid century spatha type Lauriacum-Hromowka:

Not the answer you're looking for? Browse other questions tagged art sword roman-kingdom or ask your own question.

8
Was the ancient Roman King ( i.e. rex) elected for eight years?
19
How were small swords worn in the 18th century?
5
Do busts or statues exist for all the Roman emperors until the fall of the West?
14
Is there contemporary evidence for the Roman Kingdom?
1
Did the Horatii brothers take an oath as depicted in the painting Oath of the Horatii?
5
Are there depictions of horsemen in Roman Republic other than on the coins?
10
Why did Mettius Fufetius not join the Veiites in directly attacking the Roman King Tullus Hostilius?
19
What are all fantastic creatures on The Nile mosaic of Palestrina?