In WWII, why did people not run away from executions?

In several videos and photos you see people getting round up. In the photo below they're at the site of a mass grave and can clearly see they're going to die.

Why does nobody try to run away?

Same goes with firing squads. You pretty much know you're dead, why not try to escape? I understand that if you're there with your family, you're afraid they will hurt them on purpose, but in other situations..

I can't seem to grasp that idea, but maybe I'm too influenced by Hollywood and want to be a hero. 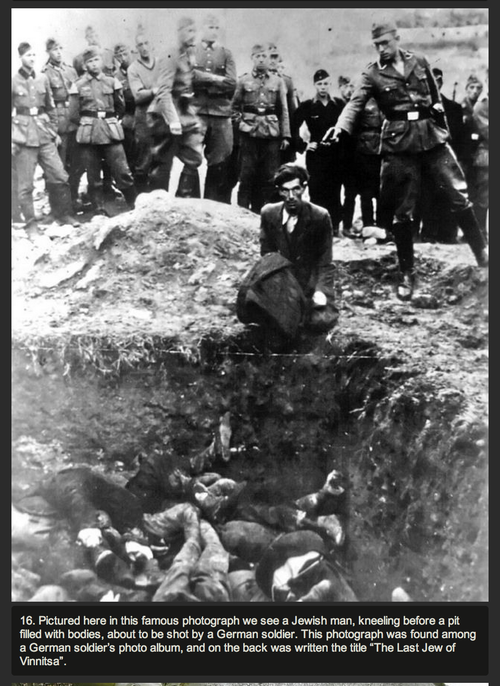 Because the choice there is not between dying and escaping, or between dying or being a "hero." The choice is between a quick and hopefully painless death from a bullet to the brain, versus a long and painful death from being shot while running and possibly tortured afterwards for trying to run. The odds of those people escaping death, no matter what they do, is basically zero. The odds of experiencing a painful death from trying to escape are fairly high. It's horrible that anyone would have to make that choice, but in their place I'd probably weigh the odds and do the same. Make no mistake, real life is not Hollywood, and while I can't say for sure (having never been in that situation) I am fairly confident that no one but the people in that situation can understand the mindset or what it feels like.

Human behavior in extreme situations isn't about choices, you don't get choices, you get primal reactions. The biggest misconception spread by TV and movies is the idea that when your life is in danger you'll be able to control your actions logically and rationally. In reality your decision making ability degrades significantly and you revert to a very primal survival state. If you're interested more in the realities of the human mind and body under that kind of intense pressure I would suggest reading "On Combat: The Psychology and Physiology of Deadly Conflict in War and Peace" by Dave Grossman and Loren Chrstensen. It's a very eye opening book.

"In several videos and photos you see people getting round[ed] up... Why does nobody try to run away?"

It's not that nobody ran away, it's that nobody ever took a video of people running away.

People ran away all the time. They ran, they hid, they begged and they fought. The individuals who survived were for the most part of an age and background that were capable of running and of hiding. But when people got caught, turned in or trapped, a very human response at the end of all things is to do pretty much nothing.

Friedrich Jeckeln was an Obergruppenführer in the SS, who was highly decorated for his role in standardising the procedure of pit shootings. One of the things that he noted (although it was not put into practice in the picture above) is that there were fewer attempts at flight if you made people undress before approaching the pit. His implementation of this idea also speaks to the fact that, fully dressed, many people did attempt to flee at the last minute.

Such flights were all the more common in circumstances in which the shootings were conducted in an erratic manner. Where they were organised and streamlined, resistance was minimal. Again, this is a very human (lack of) response.

I don't know how easy this would be if just you jumped out of the execution queue and took of running. Generally these executions had a squad of soldiers performing the execution, plus often machine gunners in the back of the transport trucks over looking the site. I agree photos of these executions are tragic and the poor souls look pathetic waiting to die, but I don't think they'd get far running across the field given they would have been very weak with hunger and lack of sleep. If they all took off at once and tried to over power a few guards then some could possibly escape. How long they would last living in the wild and the cold and if they would find people willing to help them instead of turning them in. Not sure if there would be retributions for those who were left though. There are worse ways to die than getting a bullet in the head.

many did try to run, at least one Polish Officer ran from the Soviet Executioners at Katyn. Much easier to run and hide in a forest than in an open featureless place like the Dunes of Latvia. the most consistently succesful tactic was to pretend to be dead and just hope you didn't suffocate in a mass grave before it was safe to dig yourself out. the father of my Friend ran from a UPA execution squad in 1943 in Wolyn and is still with us.

There were several reasons:

In addition to great answers above, I'm currently reading "Yank", by Ted Ellsworth, who was captured by the Germans in France. (The options were to surrender his company or have the parts of it hunted down and killed.) After the surrender, on two occasions a German lay down on the ground behind a machine gun pointing at the dozens of prisoners, but (obviously) didn't fire. He said that they were expecting to be shot, but were so exhausted, cold, and humiliated that they really didn't care much.

It has been mentioned that any escapee from a camp faced an often hostile local population, maybe one with which they shared no common language. In some countries, local collaborators were police -- imagine running away from police in current times: How far would you get?

54
Why were Spain and Portugal neutral / not invaded in WWII?
11
Why did American public opinion move away from isolationism in 1940-41?
15
Why and how were east Brandenburg, Pomerania and Silesia taken away from Germany after WW2?
11
Why did Central and South American nations participate in WWII?
6
Why was Turkey neutral during WWII?
7
Why was Japan not worried about Soviet invasion during WWII?
23
Why did US Navy WW2 torpedoes detonate at the end of their run?
4
Why were Red Army Officers and soldiers not prosecuted for War Crimes in WWII?
10
When did SHAEF / Eisenhower move HQ from London to France during WWII?