How did the Carthaginians manage to survive three years of siege?

The siege of Carthage was the main event in the third Roman war. It went on from 149 B.C. to the spring of 146 B.C. According to Wikipedia the Carthaginians would have had about 410 000 citizens and 90 000 defenders.

How did the Carthaginians keep their population alive? It wasn't like everyone in the city was doing nothing either, as

The city managed to produce 300 swords, 500 spears, 140 shields and 1,000 projectiles for catapults every single day

according to Appian of Alexandria. 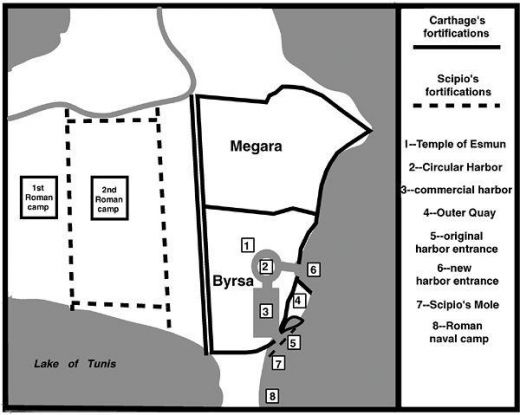 As the image above shows most of the peninsula would have been occupied by the Romans, so more then a little farming seems impossible.

So my question is twofold:

2) How did they manage to get enough drinking water? (I know they had large cisterns to store water, but can that really have been enough for the whole population, Especially with large amounts of refugees from the countryside?)

Note item (6) - New Harbour Entrance on your map. This entrance was constructed in 147 B.C. (the third year of the siege) simultaneous with item (7) - Scipio's Mole blocking the original entrance. During the siege the Carthaginians were able to continue trading overseas, albeit with limited success because of Rome's influence.

The Siege was prosecuted incompetently for the first two years. Only with the election as Consul of Scipio Aemilianus for 147 B.C. were the Romans finally successful in prosecuting the siege. Scipio arranged to construct the eponymous Mole and finally restored morale to the Roman troops enabling them to breach the walls and begin the house-to-house elimination of the garrison and conquest of the city.

Also, as shown here modern Tunis averages 45 cm of rainfall annually, and is very near the site of Carthage. This is roughly what both Aruba and Bonaire receive annually and seems adequate to refresh cisterns for quite some time if provision exists for capturing it as is done on those two islands.

Not the answer you're looking for? Browse other questions tagged carthage siege or ask your own question.

7
Did the Carthaginians have the option of sending Hannibal to Sicily?
22
What is the state of the art historical analysis of claims that Carthaginians discovered America?
16
How long did it take to build siege engines in the middle ages?
8
How did they manage accuracy with traction trebuchets?
2
Did "el Empecinado" fight in the Siege of Ciudad Rodrigo (1810)?
7
Which fortress east of Ancient Megiddo did Thutmose III go to during the siege?
9
How effective were the Mongol siege equipment?
52
How did 300,000 people survive the 3 1/2 year siege of Sarajevo?
10
Why did a Venetian colonel defect to the Ottomans during the siege of Candia?