Which country ruled Flanders in the 16th century? [closed]

I am reading a novel, The Forty-Five Guardsmen written by Alexandre Dumas; it described a story happening after 1572 in which the Saint Bartholomew's Day Massacre took place.

It mentioned a region called Flanders, and I am confused. Where is it, and who ruled this place? Can I have a picture outlining the area it enclosed?

MOST of Flanders is contained in present-day Belgium. (Small pieces are held by France and the Netherlands.

Flanders became part of the Hapsburg Empire when Maximilian of Austria married Marie of Burgundy. They actually lost Burgundy to France, but managed to keep most of Flanders and Marie's other possessions (e.g., today's Netherlands). They had a son, Philip, who married Juana, the daughter of Ferdinand and Isabella of Spain. The younger couple had a son, Charles V, who inherited Austria, Flanders, Aragon and Castile from his four grandparents, and was then elected Holy Roman Emperor.

As a result, Flanders (now Belgium) was part of the Hapsburg and Holy Roman Empires. But when Charles V abdicated, his dominions were split, with Spain, Flanders, and the Netherlands going to Philip II of Spain, and Austria and the Holy Roman Empire going to Charles V's brother Ferdinand.

To quote Wikipedia's History of Flanders:

The County of Flanders was created in the year 862 as a feudal fief in West Francia. After a period of growing power within France, it was divided when its western districts fell under French rule in the late 12th century, with the remaining parts of Flanders came under the rule of the counts of neighbouring Hainaut in 1191. The entire area passed in 1384 to the dukes of Burgundy, in 1477 to the Habsburg dynasty, and in 1556 to the kings of Spain. The western districts of Flanders came finally under French rule under successive treaties of 1659 (Artois), 1668, and 1678.

Providing a little more detail, the County of Flanders was an affluent part of West Francia and, subsequently, mediæval France, with several prominent trade ports on the Scheldt. Over the course of the collapse and division of the Carolingian Empire, the county did well by acquiring neighbouring territories; by the end of the 12th century, Flanders held territories only 25 km (15 miles) from Paris and held more land than the feudal overlord, the king of France. Flanders became increasingly prosperous through trade and urbanisation; again quoting Wikipedia:

Trade partners included England, the Baltic countries and France over sea, and the Rhineland and Italy over land. The wool trade with England was of special importance to the rising cloth industry in Flanders; the wealth of many Flemish cities (as their Belltowers and cloth halls testify) came from the drapery industry. Aside from this, the grain trade with England and through Holland with Hamburg were also important. Saint-Omer became the most important transit-port for French wine in the 12th century. These were the centuries of the breakthrough of the Flemish merchants; Flanders' flourishing trading towns made it one of the most urbanised parts of Europe.

By the late 14th century, the prosperity of Flanders suffered greatly from war (France wanted to reconquer the county but also the Hundred Years' War disrupted trade routes), from the Black Death and its general depopulation of Europe, and the establishment of a rival cloth industry in England, often with Flemish émigrés. Marriage between Margaret III of Dampierre, Countess of Flanders, and Philip the Bold, Duke of Burgundy ended the independence of Flanders, whose fate now followed the rest of the Southern Netherlands, being inherited by the Habsburgs in 1482, being detached from France in 1549.

The Netherlands were an important part of the Holy Roman Empire. For Emperor Charles V (r 1519–56) personally, they were the region where he spent his childhood. Because of trade and industry and the rich cities, they were also important for the treasury.

Between 1568 and 1648, the Netherlands as a whole rose up in revolt against Habsburg rule in the Eighty Years' War, which led to Dutch independence; the Southern Netherlands (including Flanders) were reconquered by Spain between 1579 and 1585, however. So, during the period you're interested in, Flanders was part of a revolt against the Spanish rulers organised by their northern Dutch neighbours.

Subsequently to your period of interest, the Southern Netherlands were inherited by Austria in 1713, with the southern part of Flanders having been transferred to Louis XIV's France by the Treaty of Nijmegen in 1678. In response to the French Revolution, the Southern Netherlands once again rose up in revolt in 1789/90, with Flanders forming part of the short-lived United States of Belgium in 1790. Imperial order was restored for five years, until annexation to France during the Revolutionary Wars. After the wars, the Southern Netherlands (and two neighbouring ecclesiastical territories) were joined to the Netherlands until the Belgian Revolution in 1830. Count of Flanders was a title given to the second heir to the Belgian throne until 2001, with the region of Flanders being the name of the Dutch-speaking northern half of Belgium, though this bears little correspondence to the mediæval county.

Near your time period is this 1608 map of the county. For correspondence to existing maps, note that the two cities in red are Ghent (centre, capital of Flanders) and Antwerp (top right, in the Duchy of Brabant, at the base of the Scheldt estuary): 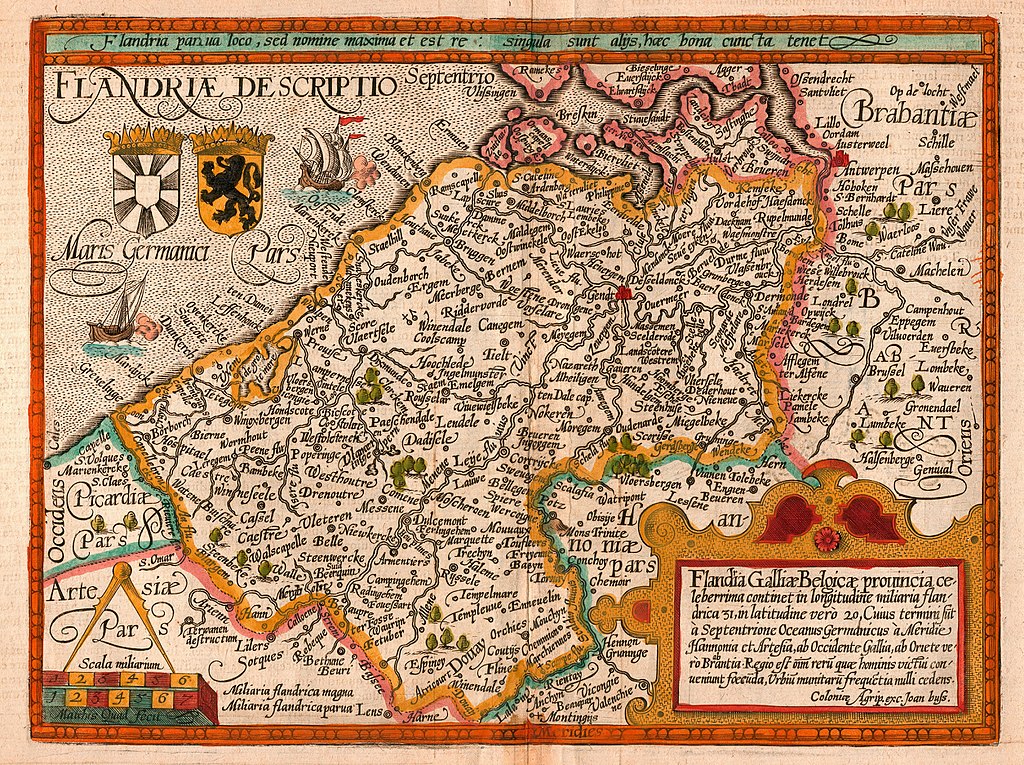 Here are four maps tracing the de facto control of the Low Countries through the first 30 years of the Eighty Years War:

The coloured area in the first map corresponds highly with modern Netherlands, Belgium and Luxembourg.

No cities are marked, but Antwerp is located at the south-east corner of the Scheldt delta as drawn. To a first approximation, all of modern Netherlands (except Limburg) lies south of an east-west line drawn through this point, and all of modern Belgium south of the same.

For most of the latter half of the 16th century Flanders was part of the Spanish/Austrian Netherlands, except for a brief period when it formed part of the United Netherlands under the Treaty of Utrecht, prior to being re-conquered by Spain in 1580.

Here is a detailed map of The Netherlands 1559 - 1609 courtesy of the University of Texas Libraries.

Here is a detailed map of the Low Countries following The Treaty of Münster in 1648 from Historical Atlas by William R. Shepherd 1911 and again courtesy of the University of Texas Libraries.

Not the answer you're looking for? Browse other questions tagged europe 16th-century or ask your own question.