When and where did socks become common?

To be clear, I mean the socks you wear on your feet, to insulate you form your shoes/boots/other footwear. By common, I mean easily available to the masses, rather than just to the rich.

That depends on what you mean by 'socks'.

Hesiod (Greece, ~700 bce) recommends that farmers line their boots with felted wool for extra insulation. That wool layer could be considered the first sock, and it was commonly available to people who weren't particularly rich.

When the Romans invaded northern Europe (ie, Gaul), they started wearing sewn foot coverings called udones. Udones could be worn under boots like modern socks, but this wasn't always the case; they were heavy wool and could be worn on their own, or with sandals (in which case they served as the main covering for most of the foot, with the sandal being equivalent to a removable sole, similar to the Japanese tobi and geta arrangement that remained in use until the mid twentieth century). I don't know when udones were first invented, but they were in common use by the second century CE.

The first known samples of knit socks appear around this time, in Egypt, Syria, and Holland, but they were made using laborious one stick knitting (fourth paragraph) and so may not have been in common use.

During the middle ages, a pair of hose (the lower leg covering) could have its own foot, in which case it would often be worn under shoes or boots (though it could have its own sole as well). See http://www.crofters.org/personal%20essays/history%20socks.htm. Hose would be sewn cloth, unless you were pretty rich - knitting came to Europe in the 12th century but was mostly used for luxury goods at first.

I'd say the knitted wool stockings that became popular around the 17th century would count as socks by most definitions - they were not sewn, and were always worn under heavier, specialized footwear. Most people in western Europe could afford at least a pair or two of stockings by that time, because knitting had become a relatively common skill. All you needed was thread, a couple of sticks, and a wife ;).

If you don't consider stockings the same as socks, the transition came in the decades following the French Revolution (say around 1790 - 1820). The short-breeches-with-stockings look went out of fashion, and men wore longer pants. Since they no longer needed to cover the lower leg, men's socks got shorter and started looking like the ones we wear today.

Beggars would still wrap their feet with rags, but the industrial revolution brought the price steadily down, making this less common. By WWI, you can easily find accounts of soldiers repairing their socks, meaning that foot wrappings weren't considered acceptable in western Europe or America, even if you were roughing it.

That depends on the country, I think. In the USSR, socks became common for more than 50% of people around the 1950s. The reason is that people often had to use one pair of boots for more than one person. And socks don't help in it.

Edit from Jan.2013: Oh! In the Russian Army the socks have been promised to be allowed to use just this week! Ehm. Promised this week.

The Russian army changes to socks 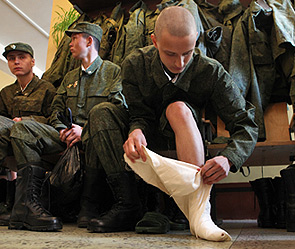 Not the answer you're looking for? Browse other questions tagged technology cultural-history or ask your own question.

8
When and where did people first start wearing underpants?

7
When did commercial studio photography become common?
23
Gender Color Association: When did boys become blue and girls pink?
0
Is the enforcement of Hijab wearing for Muslim women a recent occurrence?
7
Did the medieval Europe have an active "lowbrow" culture?
8
When and where did people first start wearing underpants?
2
Did people in the late 1800s and earlier really think that there would be, or already exist, "mechanical men"?
12
When did fluorescent lights become common in Europe?