Origin of an old museum ticket

Here is the ticket :

I have at home since several years a old ticket (originally, I thought it was a stamp) and I would like try to determine its value and where it was printed. I think it is written in Greek but I don't understand the text because I don't speak a word of Greek. If you can help me, thanks =)

Here is the complete image with a new ticket. What is the abbreviation ΕΠ ? Thanks for this, I will already learn more about the Greek orator :) 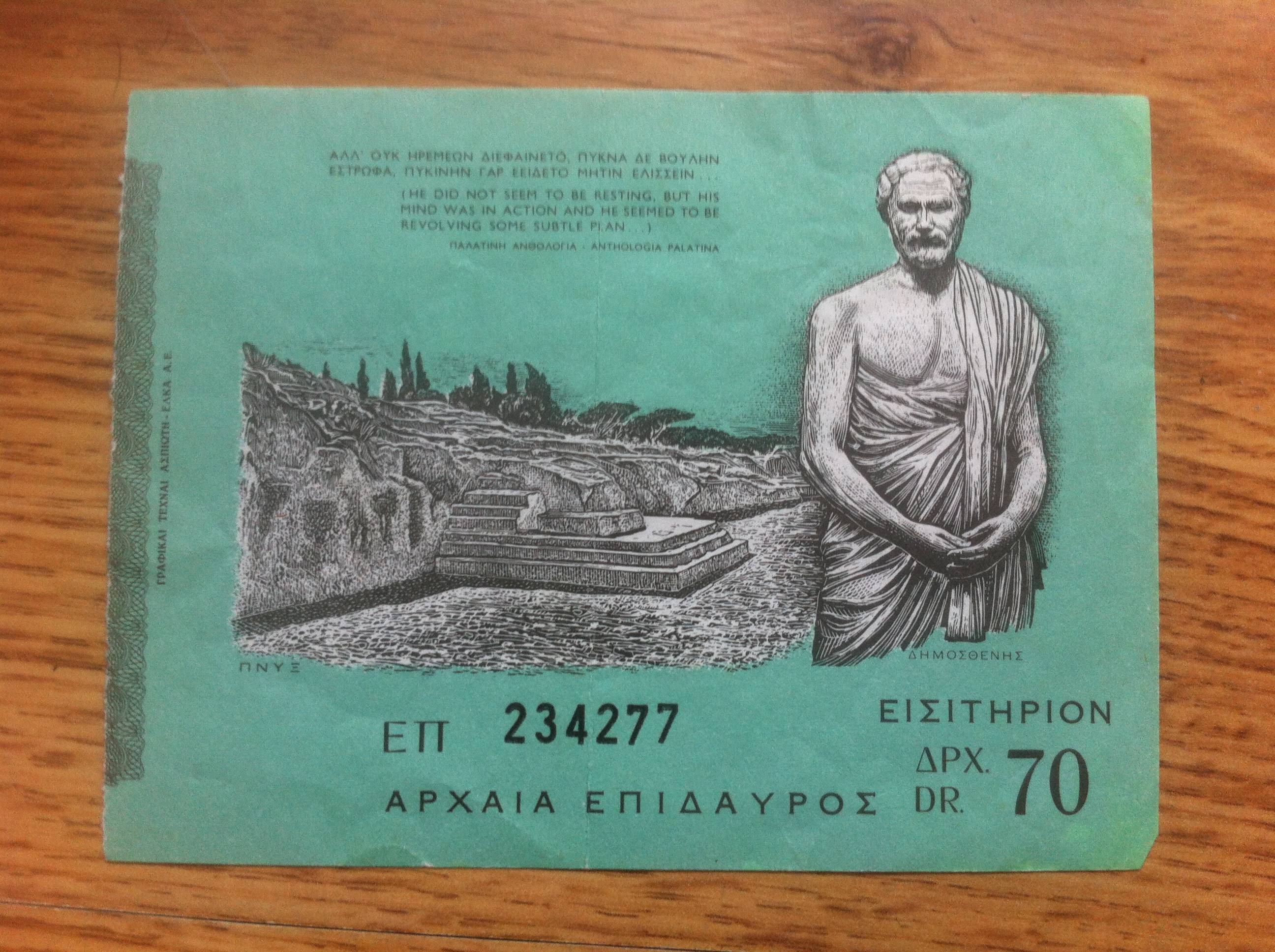 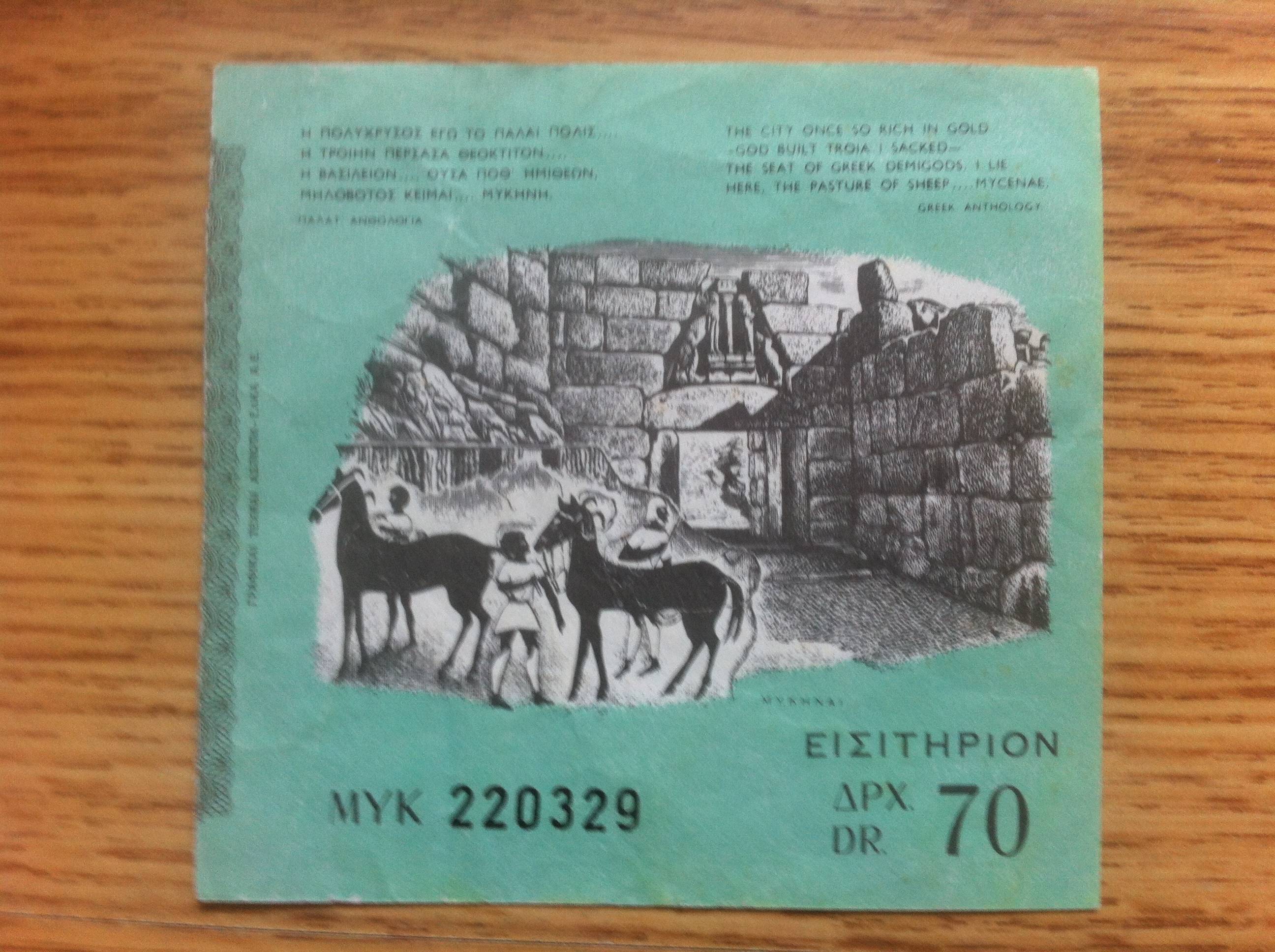 These are tickets to the archaeological sites of Epidaurus (which includes the still in use theatre) and Mycenae. In the Epidaurus ticket, the images are of the Athenian Pnyx and the orator Demosthenes. In the Mycenae ticket you can see the Lion Gate, as Pieter Geerkens already mentioned.

The fine print on the left (the printing company's name) is written in katharevousa. This and the price (70 drachmas) points to the tickets being issued sometime in the 70s or early 80s.

The text above the first image is in both Greek alphabet and in English, the latter being:

(He did did not seem to be resting, but his mind was in action and he seemed to be revolving some subtle plan ...) 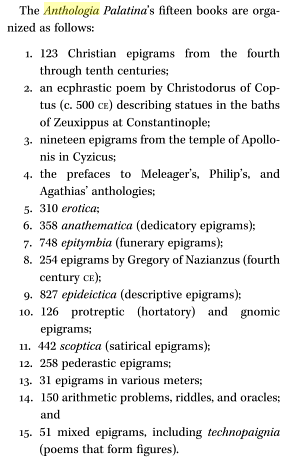 The Palatine Anthology was discovered in Heidelberg in 1606, and is a collection of approximately 3700 epigrams, or poems, derived from the collection compiled by the Byzantine protopapas (archpriest) Constantine Cephelas around 900 AD.

The second image is of the Lion Gate in Mycenae: 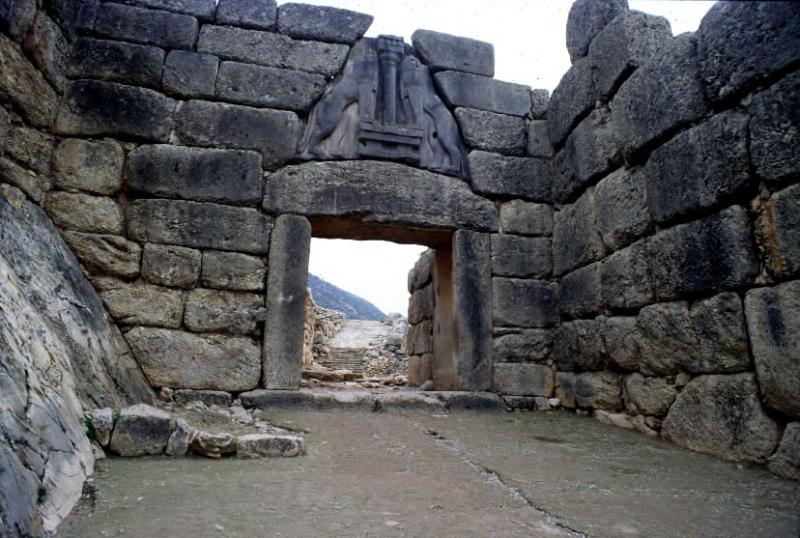 and is accompanied by a poem fragment that is attributed to the Greek Anthology, which is the collective title for the Palatine Anthology and the smaller Planudea Anthology.

The text underneath the first image translates into English as Archaia Epidavros, the current name for a small fishing village at the east coast of the Peloponnese.

The text above the price on both stamps translates into Latin lettering as Eisithirion, the Greek word for ticket. (Observe also the perforations along the left edge of both images.)

Update:
OP's guess that they are museum tickets might explain the dual Greek/English wording.

The vertical writing on the left points to the printing company, Aspioti-ELKA that was declared bancrupt in 1997.

That is indeed Greek Looks like a Ticket to a museum or field.

Not the answer you're looking for? Browse other questions tagged greek or ask your own question.