What became of Nazi Germany's embassies in neutral countries? 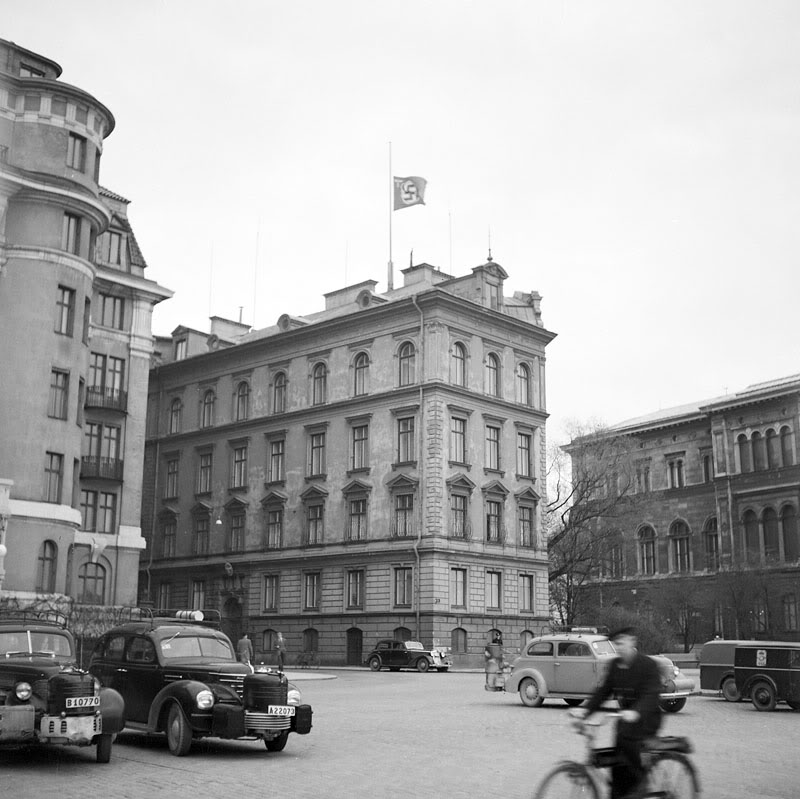 This picture shows the German embassy in Stockholm very near the end of World War II (with the flag lowered to mark Hitler's death).

Germany surrendered on the 8th May 1945. The Flensburg government was dissolved and its members arrested on 23rd May. The Allies formally assumed complete control of Germany on 5th June and arguably the German state ceased to exist.

The embassies in neutral countries must have been one of the few elements of the Nazi state beyond the reach of the victorious allies and untouched by the damage, destruction and civil breakdown occurring in most of Germany. There must have been German officials comfortably resident in neutral capitals and working up to and beyond 8th May. Possibly they tried to continue conducting embassy business up to and beyond 5th June.

At what point were German embassies in neutral countries shut down, if indeed they were? What became of staff, both German and local? Did they continue to draw salaries and who paid them? At what point was an embassy's Nazi paraphernalia disposed of? Who owned the physical buildings after 5th June - was it the four Allies? Or did the Irish, Swedish and other governments quietly seize them?

The salaries stopped as soon as Flensburg government was dissolved. The officials and technical personnel went on with their lives - found other jobs, went home or emigrated. The buildings lay fallow (the occupying powers being jointly responsible for their maintenance) until the Bundesrepublik & DDR were proclaimed in 1949, at what time they were turned to the East (in the Eastern Block) or West Germany (the rest of the world).

23
How were diplomats and their staffs treated when World War II was declared?
4
What happened to foreign investments of enemy citizens during WW2?

24
Why were the Germans and Russians so fixated on an unlikely "separate peace" in 1945?
14
What was Nazi Germany's end goal?
2
Why were Red Army Officers and soldiers not prosecuted for War Crimes in WWII?
11
Why did Joseph Goebbels allow an all-Jewish Orchestra to exist and perform in Berlin from 1938 to 1941?
10
What was the timetable for Germany's Invasion of the Low Countries (Fall Gelb) in WW2?
23
Who was the most successful German spy against Great Britain in WWII, from the contemporary German perspective?
9
Why did the Irish Free State suppress news of the Holocaust in 1945? Reaction once it became known?