Why did it take so long for humanity to be able to cross the oceans?

Caravels were a key invention that allowed Iberian Peninsula people to sail from Europe to America.

But why it took so long for this to happen? Which problems had to be solved to make that possible?

Was the sailing technology the most important?

Nick Szabo describes in this series of recent articles on the sandglass and mechanical clock, traverse-board, and dead-reckoning maps and errors the four significant advances in navigational technology that were unique to Europe during the Age of Discovery.

For recording speed and direction for each sand glass time interval (e.g. half hour), pilots used some variation of the traverse board, in which these values were specified by the locations of pegs in the board.
traverse-board 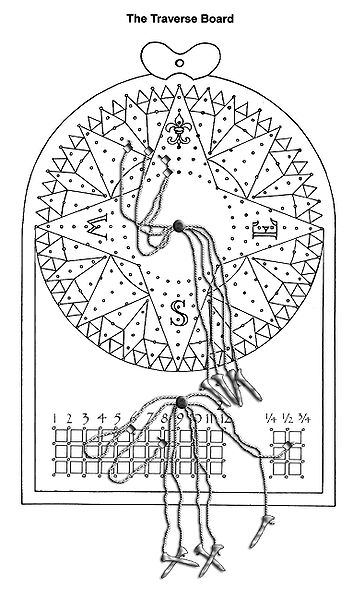 To reiterate the most important point: this is a different question than the question of what the error is when plotted on a normal map. Historians trying to recreate these voyages, in order to figure out where their landfalls were, or plot them on maps, or to estimate what navigational acccuracy of European navigators achieved in that era, usually haven't understood this crucial distinction. Indeed, because currents and magnetic variation don't in most places in the open ocean change in extreme or sudden ways, the resulting errors in dead reckoning navigation tended to be much smaller than the errors when plotting the dead reckoning directions on a Ptolemaic map. If you can scrutinize some more complicated diagrams I can demonstrate this by example here. First consider two dead reckoning itineraries, unadjusted for current and magnetic variation and thus plotted non-Ptolemaically:
dead-reckoning maps and errors

The simultaneous invention of the caravel by the Portuguese (The first vessel combining the capacity, maneuverability, and upwind sailing ability of a dhow with the robustness to withstand Atlantic storms.) combined with the recognition of global wind patterns as illustrated below to allow reliable access to any location along the coasts of the world

Note that the 9th and 10th open-sea explorations of the Norse were entirely performed in coastal waters or north of the North Atlantic Westerlies, and over the fairly short hops from Norway to Faeroes to Iceland to Greenland to Labrador - this is not accidental. Getting home was always easy by simply reaching (or rowing) south into the Westerlies and hoisting the square sail. Even over a short hop such as from Iceland to Greenland, comparable to a sail from Jutland to Scarborough, Of the first 24 boatloads of land-hungry settlers who set out from Iceland in the summer of 986 to colonize new territory explored several years earlier by the vagabond and outlaw, Erik the Red, only 14 made it, the others having been forced back to port or lost at sea.
The Fate of Greenland's Vikings

The combination of these advances - large ships able to sail upwind; better understanding of global wind patterns; and improved dead reckoning through the use of mechanical clocks and sand glasses together and a traverse board - were all unique to European sailors for over 200 years starting about 1450, giving them a complete monopoly on reliable long-distance open-sea ocean navigation through the period. Prior to this time, though limited open-sea navigation was performed by other cultures, the inability to reliably and predictably return to the origin limited its usefullness.

I will add following reasons to sds answer:

Ability to move back
If your sails only allow courses before the wind, relying on wind alone is a death trap. Noone wants to be pushed away from the safe coasts into unknown waters. So the first ships were galleys which were able to move in any direction, but had virtually no resistance against bad weather. So galleys were forced to move along coasts to reach land in case of a storm and need to replenish their food and water because of the heavy workload. If you look at the distances, an Atlantic crossing with a galley is practically impossible (and has been AFAIK never achieved). So both the Romans and Phoenicians were not able to build up a connection. The vikings longships were the first ones which were able to sail at least perpendicular to the wind and were therefore equipped for longer travels.

Food (Scurvy) It is not sufficient that you have food supply, you need to have access to fresh food to prevent scurvy. As the reason for scurvy was not understood (until the 20th century; Lind was in the 18th able to deduce that you need citrus fruits, but the missing knowledge of preserving Vitamin C meant that the British Navy gave out lime juice which was cooked and runned through copper pipes destroying the vitamins), there are only few options. The first one is to make the ship as fast as possible because scurvy needs time to develop. The second one is to make the ships big, so big, that fresh food can be cultured. This was the reason for the successful attempt of the Zheng He expedition.

Ship craftsmanship You need a vessel that is able to ride out storms, have enough cargo room for enough food and water, is able to move at relevant speeds and can be effectively steered. This requirements could not be planned and tested, but must have been acquired by a long sequence of trial and error.

Navigation To be frank: Even the atlantic crossings by the Europeans caused horrific losses of life because even with a latitude there were always severe problems because captains were not able to decide if they needed to be careful (reefs), were forced to move into storms or had no idea how far they were away (replenish food).

I understand the scope of the question as

This means that it has to carry several different sails - and managing them is a very non-trivial art.

Also, building a big ship which does not capsize in a rough sea is another highly non-trivial exercise.

So, until caravel ocean crossing was not feasible.

Navigation was less important because travel around Africa to India can "hug the coast" and traveling between Europe and America is East/West, so as long as you keep your latitude (which can be measured relatively easily) you will hit your target eventually (and one can even estimate ETA using dead reckoning).

Thus ocean crossing became feasible before the problem of longitude was resolved.

Note that a big sailing ship "can afford" being lost at sea: it can carry plenty of water (and food) for the sailors and it will not run out of fuel. This means that not being able to reliably determine one's location is not such a disaster as for a modern steam ship. Naval Lookouts were always on the lookout for land and other ships though.

The development that enabled the crossing of the oceans was the caravel with its so-called Lateen sail, running fore to aft, that enabled a ship to sail by catching practically any wind.

Prior to that, ships were largely at the mercy of currents. For instance, it's quite easy to sail from the west coast of South America to Tahiti using prevailing currents, but very difficult to in the opposite direction.

Prior to the development of the caravel, it might have been possible to sail far in one direction, and not return. Of course, we only hear about the ships that made it back, which is why successful one-way voyages don't "count." It was the lateen sail that made "round trips" possible (over long distances).

Rowers don't change the equation much, unless you have a lot of them, in which case you'd have a different problem of having a ship large enough to hold of all of them, plus sufficient food and water. By using sails, the caravel struck a good balance between ship size, crew size, and power. As it turned out, caravels that were large and strong enough to hold sails were also large and strong enough to withstand the rough waters of the ocean (with the sails doing a lot of the "withstanding.")

Not the answer you're looking for? Browse other questions tagged navigation or ask your own question.

3
When & where were three masted ships invented?
3
Where did a ship's navigator usually work?
9
Do maps dating back to 1489/90 show Ascension and St Helena even though these islands were supposedly only discovered in 1501 and 1502 respectively?
6
What was the typical error with dead reckoning navigation?
3
How did sailing technology improve during the Age of Sail?
3
What convinced the Europeans that they hadn't landed in Asia?

6
How did Vasco da Gama know about the Southern Cross?
17
Why did Xerxes need a canal across Mount Athos peninsula?
60
Why did Columbus cross the mid-Atlantic instead of exploring from Greenland?