During most of the colonial era, Virginia used its own currency, the Virginia pound. Today, the pound sign (£) is used to designate the British pound as well as other "pound" currencies.

Was the pound sign (£) in use during the colonial era to refer to the Virginia pound?

The £ symbol is just a shorthand for pounds sterling, and it was in use in all of the colonies. Almost all of the "official" documents such as treasury notes, government transcripts, title transfer documents, etc. spell out the word "pound" as a matter of convention or formality. Take a look at a current U.S. bill, and you will see that the same convention still applies - there aren't any $ symbols on them. Checks (cheques) are much the same, although the currency symbols have much more recently started to appear on them as a means to confirm the written out amount. Take for example this check written by Thomas Jefferson:

In fact, your bank should confirm for you that the amount written on the pay line is legally the amount of the check.

The places where you will see the £ symbol used are either much less formal or where space is at a premium - as in this currency exchange table published by the New York Chamber of Commerce in 1770 (lower right)...

...or in newspaper advertisements such as this one from the May 13, 1780 Virginia Gazette: 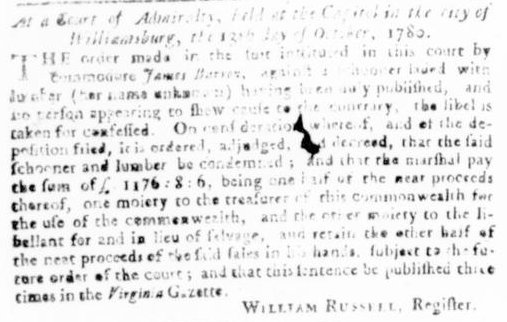 Note that the currencies issued were more like the silver certificates issued during the late 19th and early 20th centuries in the U.S. - they were in theory redeemable for the equivalent amounts in a "hard" currency. Virginia issued notes denominated in both British pounds and Spanish dollars, and through much of the colonies the Spanish dollar was considered a more reliable currency. This article by Ron Michener is a great overview of currencies in the colonies and is well worth the read.

Not the answer you're looking for? Browse other questions tagged currency colonial-america or ask your own question.

23
Why did the British not introduce the sterling in India?
6
What coin denominations were used in the US before Dollars and Cents?
8
What factors led to the 30% devaluation of pound sterling in 1949?
11
What was the official currency used in North Carolina in 1814?
3
18th-century understanding of the word "colony?"
8
How did Britain govern the thirteen colonies?
11
What is the origin of currency signs being placed before the numerical value?
9
Why did some colonies of the British Empire have their own currencies?
9
When did the US colonies/states stop making their own currencies?
23
How confusing was British currency compared to decimal currency circa 1850?