How did Richard I sail through the strait of Gibraltar?

Here's something that puzzles me. At the start of the third crusade, Richard I sailed to the holy land around Europe, through the strait of Gibraltar and across the Mediterranean.

At the time, the south of the Iberian peninsula was under the control of the Almohad caliphate. I'm sure the 14km of strait was under heavy shipping traffic. And I think Saladin was aware of what was coming.

So did the Almohad empire not try to stop them, or was the strait simply too big to control in that way? Could Richard's whole Armada simply sail through unchallenged? I don't know what the relationship was between the Almohad and the Ayyubid dynasty, but presumably, they'd prefer other Muslims to a bunch of Christians.

The groundwork that allowed the use of the strait by the crusaders began much earlier than 1190, and has as much to do with other political and military developments around the Iberian peninsula than anything else. The Almohadin fleet had been for centuries a dominant force in the region, and has essentially controlled access to the Mediterranean for 400 years1. These were not by any stretch of the imagination "scrubby Arab lateens". In fact, the Muslim navies were among the first to move from coastal attacks to the open sea and were at the forefront of naval technology of the period. One naval historian writes,

This may have also encouraged the construction of bigger ships that began to appear from the late 9th century onwards. By the 12th century some vessels from Andalus could virtually barge their way through an attempted Norman blockade of an Islamic port.2

He continues to note that these ships likely formed the basis for the later Italian and later Portuguese carracks3, and influenced European naval technology much in a way similar to architectural technology. By contrast, the dominance of the Muslims over the strait had a direct effect on the long term strategy and tactics of the crusades. It was known much earlier in the history of the crusades that controlling coastal access was crucial when fleets were mainly tied to the coast4, and this steered long term strategies in the Iberian - including the capture of Silves in 1188 (and a couple decades later the campaign to seize Gibraltar itself). Silves was one of the main nautical centers of the Moors in the Iberian, and its loss had far reaching effects even beyond the crusades, jump-starting Portuguese naval development5. It was this groundwork (along with the hard learned recognition of the need for maritime logistical support) that allowed the Richard to consider sending a large fleet through the strait.

The other piece of the puzzle is situation of of the Almohads at the time. As other posters point out, at the time of the third crusade they were basically fighting several wars at the same time. There was the ongoing conflict with the Portuguese and Spanish in Iberia, they were at war with Saladin, and by 1180 they were in enough of a decline that their power over the strait had been severely curtailed.

We must remember that by 1180 the Almohadin, a true medieval naval superpower, were fighting on three fronts: It was not a winnable war. Everyone wanted the Strait. Specifically, the former Taifa Kingdom-City of Silves gave the Crusaders a direct approach to the Atlantic Straits and, in conjunction with the Anglo/Italian-held Tortosa as an exit, and with Sicilian suppression of the Barbary coast from the direction of Tunisia, having Atlantic Silves allowed the Crusaders direct transit not only through the Straits but through the very heart of the Almohad Empire.6

So if "Richard was a lot more afraid of storms", it was because control of the strait by the Almohadin had been compromised by 1190. They neither had the inclination nor available military capacity to attempt to stop Richard's fleet.

Note: Just an aside, Richard didn't actually sail with the fleet through the Strait - he marched overland from Vézelay with the intention of meeting them in Marseille. Due to a drunken pillaging of Lisbon that resulted in a 3 week delay, Richard had already left without them on hired ships.7

Saladin was actually at war with the Almohads. The latter were probably pleased to see the crusaders arrive on the scene.

At this point in history the Northern European galleys were much faster and seaworthy than anything the Arabs were building. Also, in arms the Northern Europeans had caught up with the Arabs, and exceeded them by far in the quality of shields and armor. Richard's knights were fully armored in steel while the typical Spanish arab was wearing cloth robes and a wooden shield. By the time of the third crusade (1189-1192), the Spanish Arabs were no match for Richard's fleet, which was large and well equipped. Even one hundred years earlier in the time of El Cid, a half-Christian, half-Moorish warrior Northern European technology was being used to basically kick Arab butt in southern Spain; and Richard was on a whole different level than El Cid. Richard was a lot more afraid of storms than of any scrubby Arab lateens.

When Richard got to Cyprus, he completely destroyed them, and the Cypriot arab forces were much more advanced than anything in the Moorish caliphate. The Cypriots, in fact, managed to bust up a couple of galleys before they got owned, which is way more than the Moors could have done. You have to remember that French galleys in those days were very fast. Just simply catching sight of them would have a challenge for the Moors forget about stopping and engaging them. 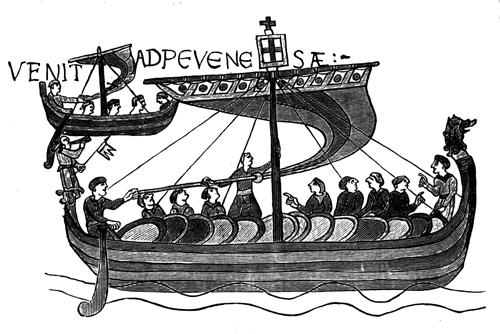 Excellent article explaining the timeline, each crusade and the complex relationship between Saladin and the Berberic Empire:

The crusades were a series of holy wars called by popes with the promise of indulgences for those who fought in them and directed against external and internal enemies of Christendom for the recovery of Christian property or in defense of the Church or Christian people.

Where were crusades fought? This is a matter of dispute among historians. “Traditionalists” would limit true crusades to expeditions aimed at recovering or protecting Jerusalem.

When were the crusades? The first crusade was launched by Pope Urban II at the Council of Clermont in 1095. There is controversy over the last crusade. “Traditionalists” would end the crusades in 1291 with the fall of the last crusader castle of the Latin Kingdom, the city of Acre (on the northern coast of present-day Israel

c.950-1300 Period of steady demographic and economic growth in Western Europe. The population of Europe (excluding Russia) more than doubled, growing from about 30 million people in A.D. 1000 to about 70-80 million in 1250

Not the answer you're looking for? Browse other questions tagged crusades crusaders richard-i saladin or ask your own question.

23
When did the Knights Templar dissolve and why?
15
Who gave King Richard I the title Coeur de Lion?
32
Why did Saladin show kindness to Richard I?
38
How did Medieval armies survive the use of mail armor in the deserts of the Middle East?
13
Where did the Crusaders go after 1291?
0
What gift did Saladin send to Richard when he was ill?
8
How did the crusaders "know" that they found the Holy Blood?
9
Any information about what William Marshall (Guillaume le Marechal) did in the Holy Land?
22
Is today's Old City of Jerusalem the Jerusalem of the Crusades' period?