How close were the living standards of India compared to England during the medieval period?

India, China and the African continent today are mostly associated with poverty in Europe, the US and so on. Looking at India specifically, did it during the medieval era share a similar standard of living to England (at the same point in time), and if so when did they start to diverge?

This is partly covered in the article "India and the Great Divergence: An Anglo-Indian Comparison of GDP per Capita, 1600-1871" by Stephen Broadberry and Bishnupriya Gupta.

The article is available here: http://www.lse.ac.uk/economicHistory/pdf/Broadberry/IndianGDPpre1970v7.pdf . (Note that in-progress articles like this have a tendency to disappear from the web over time). The abstract of the article is:

This paper provides estimates of Indian GDP constructed from the output side for the pre-1871 period, and combines them with population estimates to track changes in living standards. Indian per capita GDP declined steadily during the seventeenth and eighteenth centuries before stabilising during the nineteenth century. As British living standards increased from the mid-seventeenth century, India fell increasingly behind. Whereas in 1600, Indian per capita GDP was over 60 per cent of the British level, by 1871 it had fallen to less than 15 per cent. As well as placing the origins of the Great Divergence firmly in the early modern period, the estimates suggest a relatively prosperous India at the height of the Mughal Empire, with living standards well above bare bones subsistence.

The paper does perhaps not go as far back as you want to, but the literature section contains several references to other studies of living standards in India and Britain. I also suggest you have a look at Broadberry's home page (a very respected economic historian) for more information on related topics: http://www.lse.ac.uk/economicHistory/whosWho/profiles/sbroadberry.aspx

Contrary to the claims of Pomeranz, Parthasarathi, and other ‘world historians’, the prosperous parts of Asia between 1500 and 1800 look similar to the stagnating southern, central, and eastern parts of Europe rather than the developing north-western parts. In the advanced parts of India and China, grain wages were comparable to those in north-western Europe, but silver wages, which conferred purchasing power over tradable goods and services, were substantially lower. The high silver wages of north-western Europe were not simply a monetary phenomenon, but reflected high productivity in the tradable sector. The ‘great divergence’ between Europe and Asia was already well underway before 1800.

"Living Standards" require certain measures or standards. It is therefore very difficult to come to empirical conclusions. On what basis do we judge living standards?

However, if we consider Gross Domestic Product and Per Capita Gross Domestic Product, as well as wages in absolute terms, that is taking some particular year as a base (100) then a few studies show that while UK's Per capita GDP increased steadily from 1000 C.E., India's did not rise that much at all. By 1500 C.E. India was already lagging behind. This study is due to Angus Maddison. See this.

Another paper which provides several other indicators, also studies the period from 1600 C.E finds a steady decline in per capita GDP while UK's per capita increases steadily in the same period. See page 22, tables 12 and 13. For wages, see page 16, table 3. This paper also mentions several other source material as reference.

Another source which which studies economic history is "World Economic Historical Statistics" by Carlos Sabillon. This book details/charts the changes in GDP and sector-wise contributions (Manufacturing, Agriculture) from 16th century to the 1990s for all regions of the world. 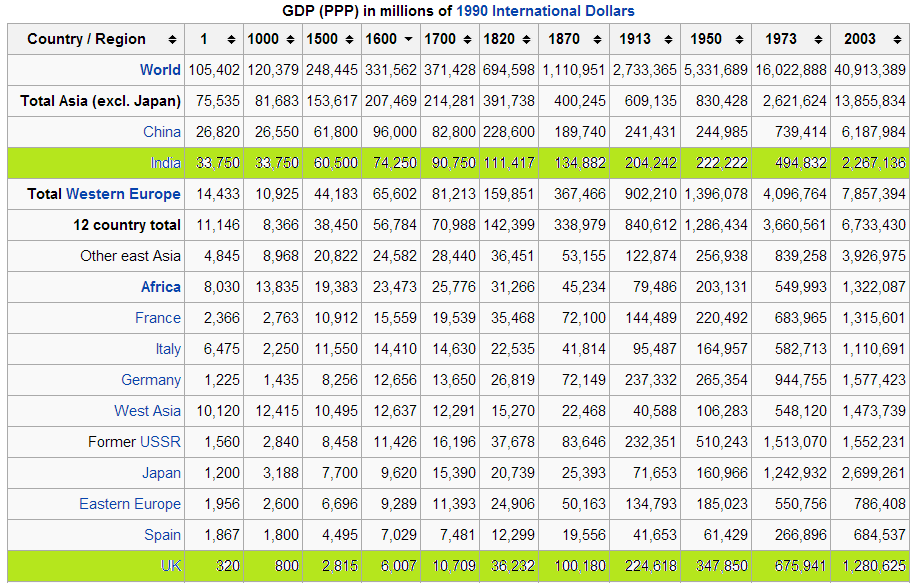 GDP per capita is an indicator of living standards.

Since 01AD until today the world's changed quite a lot. But until 1700AD the balance of wealth hadn't. For the past two centuries the share of the world's GDP has shifted to the west to Europe through imperialism, and technological innovation. With the rise of China that's changing again and this infographic explores the story of balance and unbalance in the world economy courtesy of the data from the Maddison Project (http://www.ggdc.net/maddison/maddison-project/home.htm). 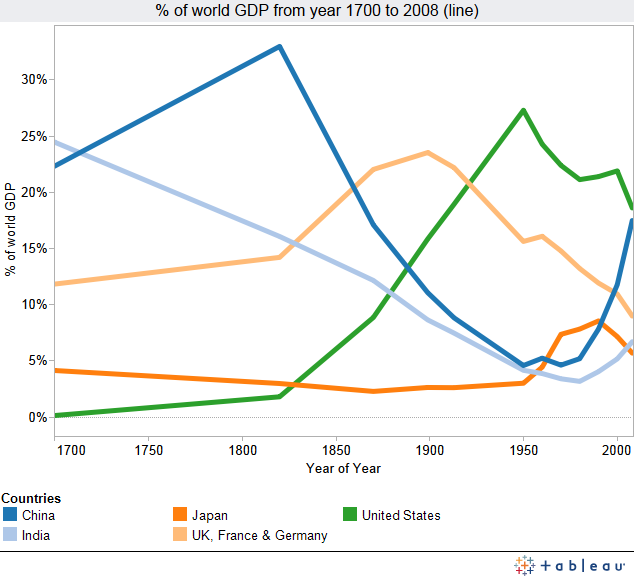 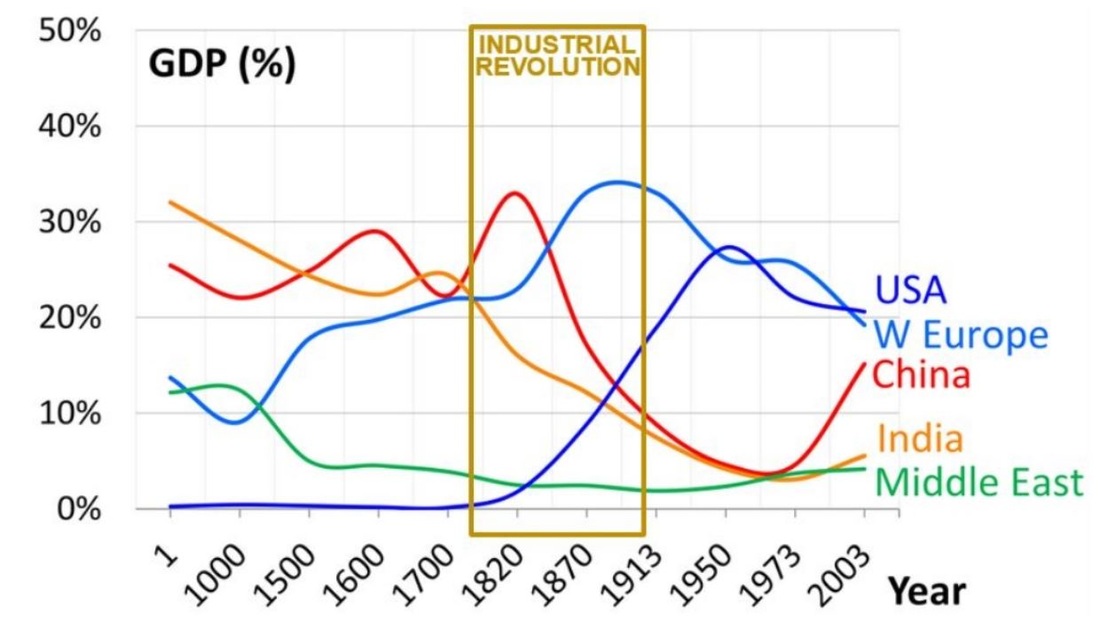 Very broad question and it also ignores the fact that feudal and cast-based societies were redistribute wealth different way than present democratic societies.

However let me give an angle that may be useful (no data, sorry): The huge economic difference between India and the UK is coming from the significantly earlier industrialization of the UK. However in the pre-industrial age the GDP was dominantly coming from agriculture and other primary sources (forestry, mining, fishery etc). This was true for thousands of years and agricultural technology more or less set the level of GDP in a given area.

Europe is much northern to India, so the agricultural production is much poorer. while the corps are different, at similar technical level you can grow 2-3 times wheat or other grain in India than in Europe, especially places like UK. In other words, Europe was significantly poorer than India or China at the time, and only exploration + industrialization changed this.

When people are not happy, they revolt against the rulers, the French revolution followed a famine. So, if you research the number of revolutions and popular uprisings through the centuries, and list them, you may have an indication of living standards by area. It has to be one of the simplest ways to answer your question. It's a direct measurement of popular discontent. So is conflict, also known as mass pillaging, the interest of neighbour countries to capture wealth from somewhere and feudal versus empire structures. Feudal societies are harsher. So is lawlessness and banditry. Unhappy societies have a lot of crime and heavy fortifications for anywhere with with even oxen to steal. Europe was lawless and every notable house was fortified until the end of the feudal system.

Living standards are normally measured by very many indicators:

The right to own an animal, frequency of starvation, quantity of gold and silver for normal people, number of diseases (the condition of people at gravesites shows how hard they worked and what they died from), longevity, existence of peasant casts that gave the majority of people no right to weapons and no right to even metalwork, nutrition and so on...

You must be be able to account for everything to answer the question..

It's barely measurable, however, you can try to find information of each of these indicators of living standards, and maybe tell us your results!

You can image a countries wealth by the amount of trade they made and transported, what leisure they indulged in, how much people emigrated from one place to another, how much they reproduced, how much work their agriculture took to feed their people and how many people per amount of resources... Rajasthan-punjab is relatively abundant, and Karnataka-central India is barren.

The quality of life was usually divided by cast, with the slaves, peasants, middle class, soldiers, and aristocracy all enjoying different lifestyles, and in different countries the distributions of classes were different, so it is just such a broad question, to ask what standards "people" had. People in areas with good weather, abundance of fish, fowl, and easy crops, essentially had good living standards, so it's very erratic.

Amount of gold and silver is not a very good indication of material possession of people at the time, because gold and silver vary geographically. Mostly trade was animals, pots and pans, woodwork, clothes, etc. In those times, countries like India were the world's only source of diamonds. Some areas traded in gold and some traded in copper, amber, jade, amethyst, gems, spices, linen, pearls were a form of currency, rubies from rivers and so on.

This is really a broad question which probably should be closed, but I will take a stab at it.

First of all, it is hard to compare India to England because India is a much larger place. Comparing India to Europe might be a better comparison.

Many parts of India were probably better off than England between 400 A.D. and 1000 A.D. after that the Moghul invasions made India go downhill and meanwhile things were getting better gradually in England.

Not the answer you're looking for? Browse other questions tagged middle-ages europe india economy england or ask your own question.

8
Eastern and Southern Europe in the medieval time period?
7
How were peasant houses constructed in medieval England?
12
Did the Romans see Africa as a black continent? Was there a perception of a divide between Africa and Europe?
17
What crops were part of the medieval spring harvest?
3
How did the layout of a Medieval European village typically change as it grew into a town?
1
How is the term "medieval" used to describe non-European civilizations and cultures?
32
How much would 300 pounds (money value) weigh in Medieval England?
35
How common were marital duels in medieval Europe?