How were FDR's economic policies as Governor of New York contradictory?

I have read in a number of Roosevelt's biographies that as Governor of New York, Roosevelt was not so aware of how economics works. He recognized that radical change was needed to respond to the Great Depression, but did not know what changes were needed. How were the reforms that FDR proposed as Governor of New York indicative of how he was "trying out" policies? I read that his policies contradicted each other, but which reforms specifically were contradictory and why?

united-states economy great-depression
Share
Improve this question
asked May 4 '14 at 1:39

** Question: ** I have read in a number of Roosevelt's biographies that as Governor of New York, Roosevelt was not so aware of how economics works.

I think that this is accurate. FDR did not have a modern nor a contemporary understanding of how the economy worked either as Governor of New York or for much of the period marked by the "New Deal". This can be excused by the fact that economic experts did not agree or well understand what was happening to the economy in that period either. Herbert Hoover's disastrous economic policies which deepened and broadened the Great Depression every quarter he was in office were not his own prescription. They were the consensus recommendations of respected conservative economic advisors. FDR realized these policies were failures early on but himself did not immediately understand what policies would work. FDR created and economic "brains trust" of experts while governor of NY to advise him on economic policy. The fact FDR had his own economic advisors does not diminish this question. FDR took advise from a broad array of people on economics and they rarely agreed. His brains trust were such a group. That left it up to FDR to pick and choose which paths to follow among the contradictory paths he was scouting. During this period FDR made mistakes as he tried many things to get the economy working and keep it working.

Hoover's Disastrous Economic Policies
Hoover basically believed the ship would right itself and it was the governments job to stay out of the way of the economy. Fundamentally he did not believed the government should play a role in regulating the economy. Among the steps which Hoover took which deepened and widened the Great Depression.

So It's true that FDR didn't know what he was doing economically. But it's also clear with 20/20 hindsight that Hoover and his consensus of respected economic experts didn't understand the economy either. What's also clear was FDR understood what he didn't know and was fast to make corrections when his policies failed. Hoover took years to question his failed policies. Not until re-election pressures forced his hand did he alter his economic approach in 1931.

Question: How were the reforms that FDR proposed as Governor of New York indicative of how he was "trying out" policies?

As governor of New York FDR understood bold action was required. His policies which brought him the most attention were interventionist and thus consistent with his Presidential policies. FDR's approach contrasted Herbert Hoover who had the government passively running a surplus for 3 of his 4 years in office (1928, 1929, 1930) during the great Depression.

As Governor of New York FDR:

I read that his policies contradicted each other, but which reforms specifically were contradictory and why?

FDR made some mistakes while he was in office, economically speaking. Perhaps his worst was cutting government spending in order to try to balance the budget in 1938 bringing about a double dip recession and hurting/reversing the recovery for a time. However, as I said FDR was listening to many experts and was trying combinations of things to see what would work. It is understandable that not all his moves worked. It's not like he was following a plan or treading a path others had blazed for him; FDR was literally making it up as he went. When something didn't work, he tried something else. The result was a new understanding of how the economy worked. In the 2008 downturn both both President's Bush and President Obama returned to FDR's policies of government intervention and deficit spending.

The formal definition of a depression is a severe recession. The formal definition of an economic recession is a decline in gross domestic product (GDP) for two or more consecutive quarters. By definition a recession is over when the economy(GDP) shows quarterly growth. Every quarter of Herbert Hoover's Presidency the GDP had gotten worse. In FDR's first six month in office, FDR had the GDP going in the right direction again. Formally given the definition, the Great depression ended in FDR's first six months in office when GDP began to grow again. 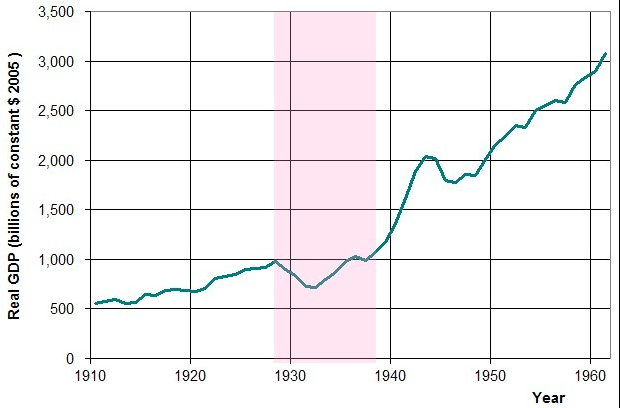 Not only did FDR turn around GDP in his first six months in office but he turned around every major economic indicator within his first 12 months in office except two. Banking foreclosures took him a second year to solve, and the DOW Jones stock market did not return to it's 1928 high water mark until during the Eisenhower Administration in the mid 1950's. 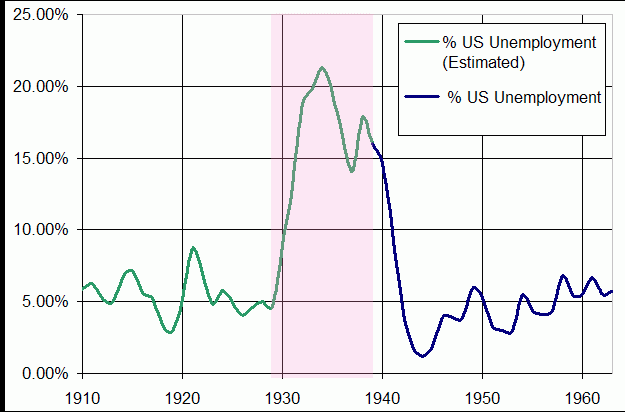 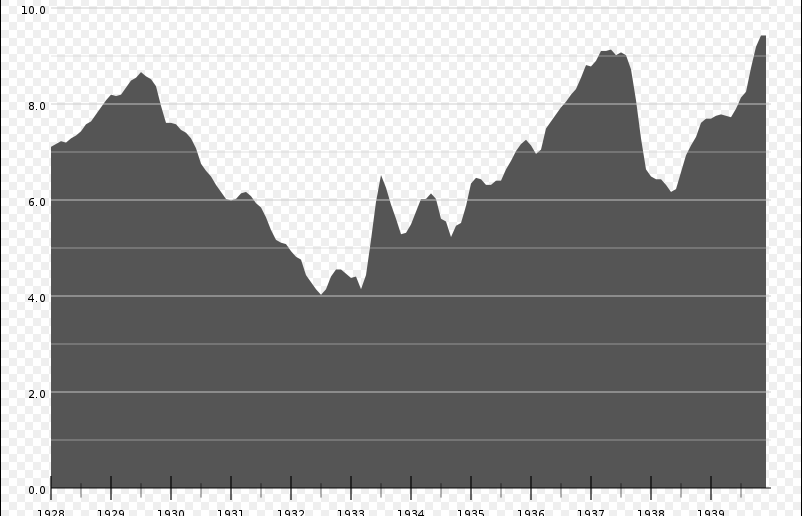 even National Debt to GDP 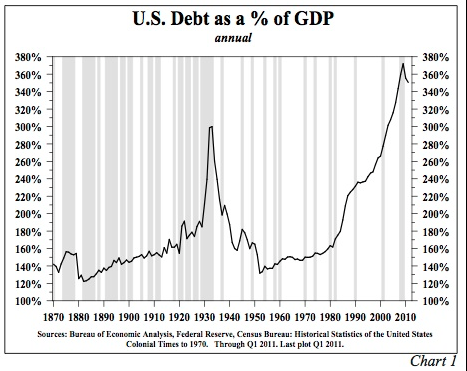 And What event corresponded with this economic turn around 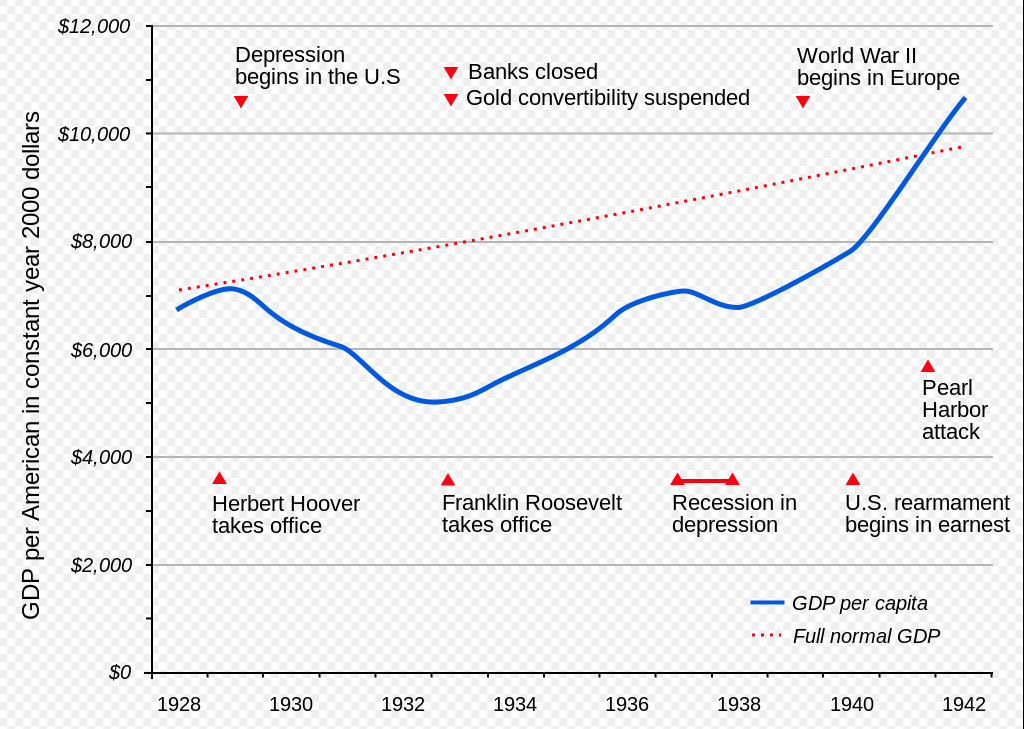 Charts From
Wikipedia: The Great Depression

Not the answer you're looking for? Browse other questions tagged united-states economy great-depression or ask your own question.

12
How did New York become the financial hub of America?
3
What factors enabled the New York Journal to survive the yellow journalism wars?
9
Did the Nazis have any unique or especially effective economic policies?
3
How many electric light companies operated in New York in 1887?
10
How did the Supreme Court case Lochner vs. New York influence the U.S. economy?
2
How well did King Harald V of Norway know FDR's dog Fala?
12
Who advised FDR on foreign policy before and during WWII?
20
Were New York or Philadelphia ever declared the capital of the United States?
5
Why could George Washington and the revolutionaries not stop Governor Tryon in New York Harbor?