A stele was found in the area of ancient Moab from the 12th century B.C. during Pharaoh Rameses II's domination of Canaan, which depicts a local ruler flanked by two (possibly Egyptian) gods, and the stele is made in imitation of the Egyptian style. 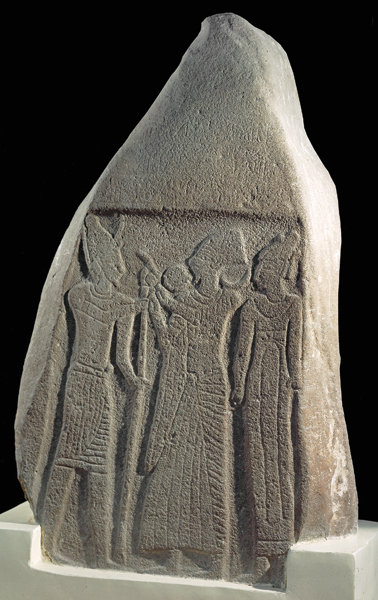 Obvious is that the Egyptians were making their peace with the Moabite tribes and trying to integrate them in a power structure on the plains of Moab. A stele found in Balu'a, depicting a local ruler who is being given a sceptre by two Egyptian gods, dates from the same period. The ruler is often identified as a Šasu chieftain.

On the Biblical Archaeology Society's page for the Balu'a Stele they write:

This roughly shaped, 5-foot-tall black basalt stela from the Late Bronze Age (1550–1200 B.C.E.) was discovered at Balu‘a in central Jordan. Carefully etched into the stela are three figures in distinctively Egyptian style. The central figure, cloaked in a patterned full-length gown and wearing a bag-shaped headdress, is likely a local king or chieftain of Moab. He is being presented on the left with a scepter held by a god who wears a simplified form of the double crown of Upper and Lower Egypt. Looking on behind the king is a female figure dressed in a sleek, fitted gown and wearing the plumed atef crown typical of the Egyptian god Osiris. Above the scene are the faint and now largely illegible traces of a four-to-six-line inscription that remains undeciphered.

So the Egyptianization of the region may have contributed to early Moab's religion and pantheon.

Archaeologist Gabriel Barkay in the article "What's an Egyptian Temple Doing in Jerusalem?" (Biblical Archaeology Review Vol 26 No 3 May-June 2000), wrote about the presence of an Egyptian Temple in Jerusalem during the Canaanite/Jebusite occupation of the city, before the Israelites conquered it and supplanted it with monotheistic worship of Yahweh in Solomon's Temple. Noting a number of artifacts present he mentions some pottery dating to the 18th dynasty of Egypt:

The other is a jug with a globular body and a ring base; its neck and handle are missing, but they can be reconstructed with confidence on the basis of numerous comparable vessels dating to the 18th Egyptian Dynasty (1575-1308 B.C.) which corresponds with the late Bronze Age in Palestine.

Then he also notes a religious statuette found as well:

The statuette can definitely be identified as Egyptian because of its shape and material; it dates to the New Kingdom and may portray the Egyptian god Amon or Ptah. A comparable figurine was unearthed in the northwestern part of the City of David during excavations in 1927 and 1928. A statuette of serpentine stone, in spite of its missing head, is a beautiful example of Egyptian craftsmanship. A chair supports a male figure wearing a long garment, perhaps the god Amon or Ptah, who probably once held a staff in front of him. Based on its style, the three-inch-high figure can be dated to the New Kingdom (16th-11th centuries B.C.).

This is additional corroboratory evidence that the Egyptians successfully introduced their religion to their Canaanite vassals, and the Balu'a Stele is most likely evidence of that in Moab as well.

As for additional reading on Chemosh, in a discussion I had with the Hebrew scholar Gershon Galil about a Moabite seal of a ruler bearing a theophoric element of Chemosh's name, through his Facebook page (possibly viewable to the public here), he told me: "For Chemosh see Müller, Hans-Peter. "Chemosh." Dictionary of deities and demons in the Bible. Edited by Karel van der Toorn, Bob Becking, and Pieter W. van der Horst. 2nd ed. Leiden: Brill, 1999, 186-189." I hope that helps.

It was common for cities in that area in that time to have their own "City-God" who took care of the city. They acknowledged the other gods of other cities as legitimate gods, but they weren't "their" god and if you worshiped someone else god then you would make your god angry. Additionally the wars between the gods were a reflection of the on-going enimosity between the cities themselves.

The degree to which they worshiped only the main City-God varied a lot, sometimes they also worshiped his wife, his children, his brother, a whole pantheon.

Not the answer you're looking for? Browse other questions tagged religion or ask your own question.

18
Was there an ancient cult of worshiping one's own reflection?
3
Were ancient Egyptians secretly monotheistic?
9
Did Greeks and Romans tolerate those who only worshipped some of their gods?
2
Where does Marsilio Ficino write that all nations worship a God whose name is spelled with four letters?
84
Why do western monotheistic religions seem to be so full of conflict over dogma?
7
What’s this odd hat/crown and is it related to Baal?
5
When did worship of Baal cease to exist?
35
What is the difference between the Ancient Greek religion and the Ancient Roman religion?