Can someone help explain this floor plan of a mid 20th century apartment? [closed]

This question does not appear to be about history within the scope defined in the help center.

I was watching 12 Angry Men, which was made in 1957; and they show this floor plan of an apartment: 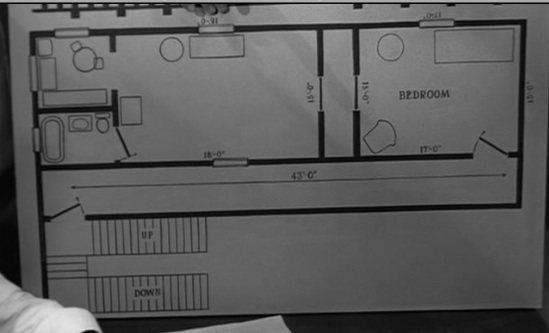 My main question is, what's the opening in the wall between the hallway and the main room? It looks like it ought to be a door, but it's shown using a window symbol. Why?

(Edit: I didn't emphasize enough - that opening really, really ought to be a door. If it's not, then I want to know why an apartment would be designed with the front door opening into the bedroom.)

(This is shown as an exhibit in a murder case, and they spend a fair amount of time discussing how long it would take a man to get from the bed in the upper right to the front door in the lower left. They all assume that he uses the bedroom door in the lower right and runs all the way down the hall. Going through the living room would involve more doors but be a straighter line, but no one mentions the possibility. Normally I'd attribute that to lazy writing, but with the way it's drawn it made me wonder.)

1) The double wall between the bedroom and the living room. I guess the space in between is used as closets, but they would be very oddly shaped; about 5' deep and 3' wide. That would be very difficult to use - a normal closet is about 2' deep, while a walk-in closet needs to be at least 4.5' wide. A more normal design, today at least, would be to make the closets open into the bedroom.

2) Why the hallway extends all the way to the right. It's not providing access to anything but the man's bedroom (ie there aren't any other apartments), so why wouldn't the bedroom go down all the way to the bottom wall? It'd be four feet wider that way, and could still open into the hallway.

The answers to those two questions could be structural. You can see I've already done a fair amount of speculating here - I'm hoping someone who knows something about midcentury architecture can give me a more definitive answer, especially about the mystery opening in the living room.

(Edit: So, one of two questions has to be answered:

Pass-thru closet designs like the one in the drawing were common in houses and apartments built during the first half of the 20th century. They lost popularity by the 1960's when squeezing the most usable space from a home plan became most important. If you look at photos of homes/apartments from this era you'll see numerous examples.

The hallway looks like a poor design. I've been in some NYC apartments that had bad/odd layouts so it wouldn't be entirely impossible to encounter one like this in real life. However, I would tend to think the overly long hallway here is probably done for dramatic reasons.

Interior windows like the one in the picture were often used to allow air flow through the apartment back in pre-air conditioning days and when people where a bit more trusting about leaving doors and windows open.

My guess is that the window/door placement would have had something to do with where pipes for heat and water were located. Plumbing was a retrofit for these buildings. In some cases, staircases had to be modified or added as well.

NYC has traditionally has had a shortage of housing, so people had/have a tendency to accept certain undesirable things that wouldn't fly in other places. Also, starting in the 20th century, NYC has a history of regulating certain aspects of apartment living to a much greater degree than other places. Controls were placed on rental rates, for example, which may have limited the renovation budget significantly.

The hallway window provides light to the hallway, obviously (the light passes in a direct line through the living room window).

This is just unsupported speculation, but...

There's a possibility that the apartment was originally intended for the large room to be the bedroom and the room on the right to be the living/hosting area. Since there don't appear to be room-specific features in either room (unlike the kitchen in the upper-left or the bathroom in the mid-left), the difference between bedroom and living area is purely a matter of furniture arrangement.

It would then not be unreasonable for the only door to open to the living area, with the bedroom having a window open to the hallway.

Answer to the question 2. Some walls are part of the whole building construction and can't be moved. I think, it is one of such. Of course, it is the bad design, but not idiotic one.

Not the answer you're looking for? Browse other questions tagged 20th-century united-states architecture or ask your own question.

78
Why, in the US, is Japanese brutality ignored compared with the Nazi brutality in WW2?
5
Was the painting of men's nails a rare practice in the mid-20th century?
4
What was the significance of the Mississipi River on the Civil War and Westward Expansion?
9
Who are the 20th century painters on this t-shirt?
1
Can someone help me ID this insignia?
12
When did the last (non-tourist) commercial stagecoach line run in the USA?
16
Where did John Adams write of the night he shared a bed and an argument with Benjamin Franklin? Did Franklin write of it as well?
3
Can someone help identify this statue?