Why are there no dogs pictured in paleolithic cave paintings?

It has been described before that the occurence of reindeers is strangely low, while this was the main food source. But isn't it even stranger for dogs? Recent genetic research suggest that dogs were domesticated a lot earlier than any other animal, which makes sense for hunters. The distinction between dog and wolf may become blurred over long times - and while e.g. chauvet cave pictures a wide variety of wild predators, even owls and hyenas, no wolf is pictured either.

Were dogs/wolves too 'ordinary' to be portrayed here, more so than reindeer?

There are lots of dogs in paleolithic cave paintings. For example: 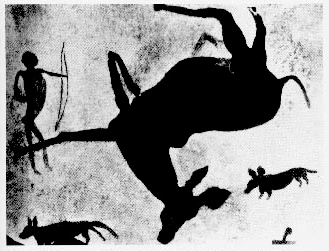 Dogs can be used for hunting in the woods, like deer, but for hunting large herds in open areas like bison, they are not useful and are more of a nuisance than an aid. (Notice that in the above image the quarry is a deer, not an accident.) A recent journal article on the subject:

From a technical taxonomical point of view, it is impossible to have domestic dogs depicted in a Paleolithic cave painting, simply because domestication of plants and animals is one of the features of the Neolithic.

So by definition, any art that depicts a canid is either Neolithic, or it is showing a wild relative such as a wolf.

Now this is a bit overly pedantic, as domestication of dogs appears to have begun in the northern parts of Asia well before the dates we associate with the full-blown Neolithic. However, the dates are close enough that it can still be a useful rule-of-thumb (considering the Paleolithic lasted upwards of 2.6 million years, and we are quibbling here over the last 5-20 thousand years of it)

I believe most answers above are pretty good, so I don't have much more to add.

On the missing part (in above answers) to cave art, from the question: "... paleolithic cave paintings?" and OP's comments asking for images.

This is from Aurignacian period (considered Upper Paleolithic), the specific site is Cave of Pont d’Arc (UNESCO). Wikipedia's entry on this site. 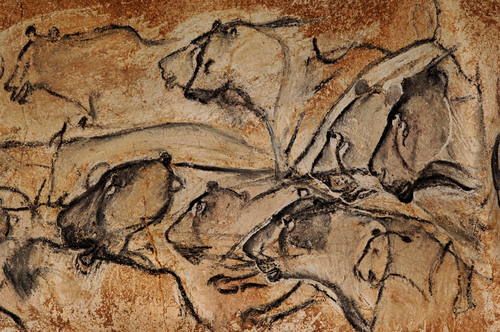 Some info on the Paleolithic dog.

Not the answer you're looking for? Browse other questions tagged prehistory paleolithic or ask your own question.

2
Why is there a gap of information in Russia for human migration?
28
Why were there no agricultural, city-state forming civilizations in the Ice Age?
2
Where are official images and metadata of cave paintings housed?
13
Why are only Homo Sapiens left?
13
How do archaeologists date cave paintings?