What does Russia want in Chechnya?

I have heard that Russia has been fighting with the Chechens on and off for about 300 years, occasionally losing control and reconquering. What exactly does Russia have to gain by retaining control of Chechnya?

I am not sure how Russia benefits by holding such a small nation. It is probably a huge economic burden to keep fighting to hold it. 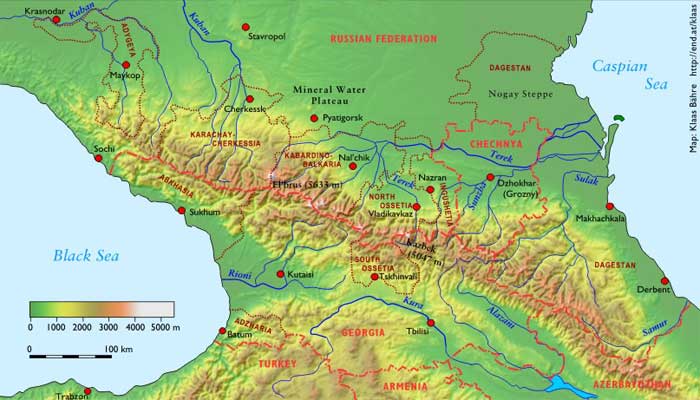 First note that besides Chechnya there are some related and similar peoples in the North Caucasus: Ingush people, Dagestan people, Adyghe people, Circassians, etc. That is, Chechnya is only a part of a greater North Caucasus community.

The ancient lifestyle of most of these people, and especially of Chechens, was making raids on neighboring settlements, capturing horses, and hostages for ransom. They had no agriculture and very little husbandry. This was quite intolerable.

But the main reason for capturing this region was, I think, making a tunnel towards Christian Georgia to help it against Ottoman Turkey after Georgians appealed to the Russian Tsar for incorporation of their lands into the Russian Empire.

Regarding modern times, I think the reasons for the First Chechen War were as follows.

The reasons for the Second Chechen War were the same but the following reasons added:

It should be noted, however, that it is quite uncertain to which extent the Chechen population supported separatism. On all elections they voted for a candidate who was supported by the Kremlin. The originator of the secession of Chechnya, president Dudayev was initially supported by anti-Communists who seized power in Moscow in the early 1990s. He was a honored Soviet pilot who participated in the Afghan War and was the only Chechen to become a Soviet general. He then quickly proceeded to install his own personal dictatorship.

Not the answer you're looking for? Browse other questions tagged europe russia caucasus or ask your own question.

32
Where does the name of the country “Belarus” come from?
18
Isn't there any positive legacy of the Mongolian occupation in Russia?
15
Three rings (wreaths?) symbol in XIX century Russia
22
When was slavery abolished in Russia?
29
What is this household object from early 1900s rural Russia?
7
What made Port Arthur (Manchuria) a better port for Russia than Vladivostok?
2
What was the social class of priests' children in Imperial Russia?
2
What did Russia do about Caucasus oil after the collapse of the Soviet Union?