Did ancient people use punctuation? [closed]

For example, Chinese, Indian,.. did they use something like dot mark to separate sentences? If not, how can they know something is an object of the first sentence or the subject of the latter sentence?

I.e "I love you and Ann and Bruce and Charlie don't love you" is two sentences with two meanings based on different positions of dot mark

I love you and Anna. And Bruce and Charlie don't love you

I love you. And Anna and Bruce and Charlie don't love you

Yes, though their uses tend to be sporadic and/or inconsistent.

Ancient Chinese texts also used ▄ as both a full-stop and a comma, or a - for pauses. However, there's a great deal of variation and inconsistency. Often they are omitted and readers are expected to work it out from context, or sentence structures especially if the document is written with a fixed style. 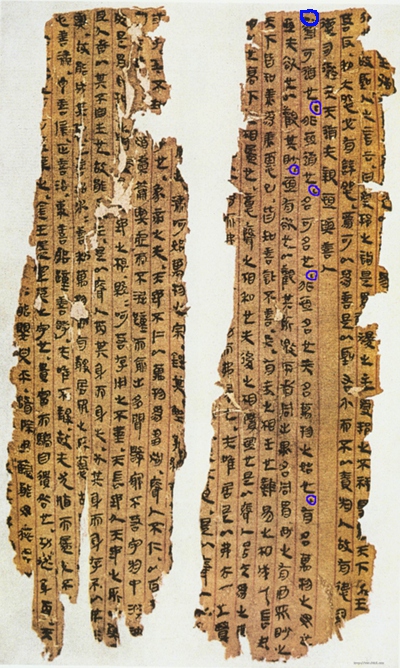 -- A copy of the Tao Te Ching excavated from the Han Dynasty burial site King Ma's Mound. Some of the punctuation marks, which seem to be analogous to a modern comma, are circled in blue.

Classical Greek also had punctuations that are largely shared with Latin. Here's some with their modern European counterparts:

The question mark in Greek developed much later, but was apparently ;

Not the answer you're looking for? Browse other questions tagged ancient-china script or ask your own question.

5
Did Emperor Gaozu of Han allow people he conquered to keep their cultural identities?
11
Did Chinese Hundred Schools of Thought influence Ancient Greek Philosophy?
21
Why did Chinese use high tin bronze for swords?
9
Did Ancient China use lead in their food/water industry as much as the Romans?
12
In Romance of the Three Kingdoms why do people still use bamboo sticks when paper had already been invented?
2
Did the Indus Valley Civilization use cotton as a writing material?