What was the Lena River Delta U-boat base in the Arctic used for? [closed]

Ask Question
Asked 6 years, 1 month ago
Active 2 months ago
Viewed 892 times
-2
Closed. This question is off-topic. It is not currently accepting answers.

In 1963 the body of a German navy NCO was found in Neelova Gulf with the remnants of his uniform and rifle ammunition.

In 1985 Soviet helicopter pilot Peter Statsyukom discovered a small complex of five underground Nazi bunkers in the delta of the Lena River in the Siberian Arctic.

Article in Russian: What did the Nazis build in the mouth of Lena?

Apparently these artificial caves were built into a large rocky outcrop and blasted out with explosives. Nearby there was a 200m concrete jetty built linked by a small tramway to the storage caves. These storage bunkers sheltered 250 German manufactured fuel drums.

Inside an accommodation bunker they also found Nazi era coins, German naval badges and buttons. There had always been wartime tales amongst the indigenous Yakut people about mysterious men called chuchuna dressed in black spotted in the Bykovskaya Duct area between 1940-42.

According to some accounts when the intact wreck of a German U-boat, U-534 was raised in the Baltic by a wealthy private individual, amongst her soaked papers were orders at the end of WWII to sail to the Lena Delta.

My question is what was the base used for?

The nearest U-Boat base was at Narvik in Norway. DISTANCE FROM Narvik to Tokyo was 7,540nm, easily within the 13,450nm range of an IXC40 class Uboat

Does anybody know and if so please could you identify sources?

OPERATION WUNDERLAND August 1942 my speculation is that the LENA BASE could have been built by the GERMAN Merchant Raider Komet, disguiset as a SOVIET ice breaker

Komet voyage to Japan via the Soviet ARCTIC Nor should we forget U362 was sunk in the Laptev Sea at 89.27 deg East: 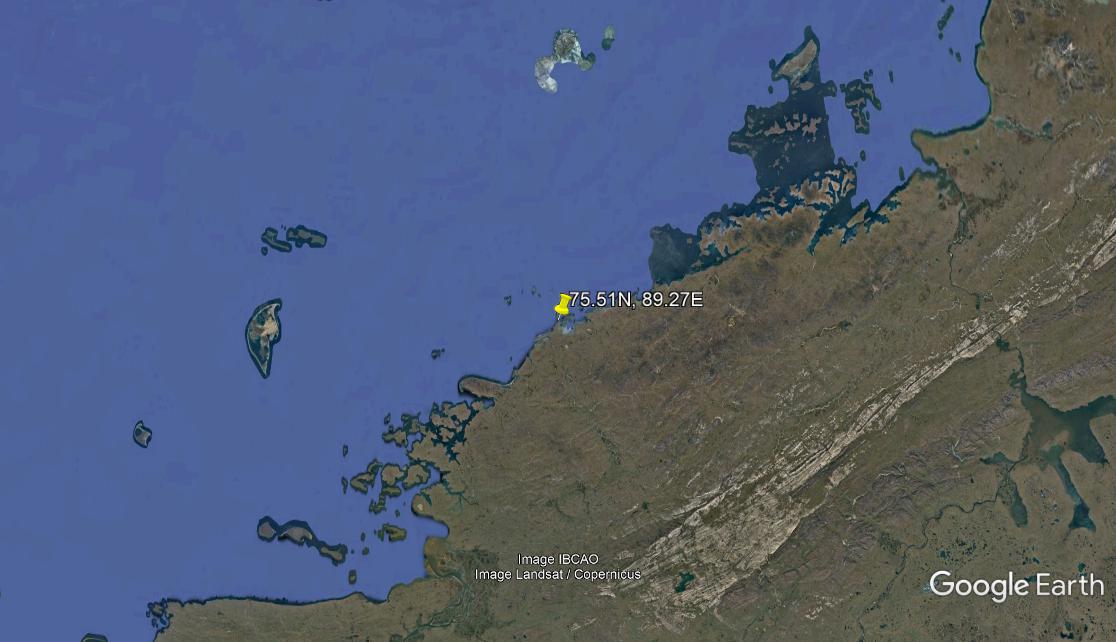 No such base has ever existed.

Let's look at the map

The air distance between Murmansk and Tiksi (Lena delta) is 1744.66 nmi.

Yes, a German Type IX submarine with a range of 12knmi can go there and back. Can it actually carry there concrete, fuel drums, workers, heavy equipment &c &c &c? Not really.

Moreover, one look at the map is enough to realize that a Krigsmarine base there would serve no purpose. It is too far to be used against the Arctic convoys. There are no targets in the area. Pacific is also too far. Add to this the harsh climate (to put it mildly - ocean actually freezes and the base is unreachable 9 months of the year) and the question becomes moot.

Yes, but the rumors are so persistent!

My guess is that it all started with oil drums. USSR swiped in Germany everything if could carry. They probably took the fuel drums and brought them to Tiksi (and many other places). Some of them might have been stolen by the locals, who then, quite naturally, claim to have fished them out of the river. Then the rumor mill takes over - someone would claim to have seen Nazi coins or uniforms or submarine pens...

At any rate, I think the Lena base is as real as the Secret Nazi Base in Antarctica or on the Moon.

PS: Don't confuse this mythical base with automatic and manned weather stations. Lena delta is too far to be useful as such.

Not the answer you're looking for? Browse other questions tagged world-war-two war nazi-germany russia or ask your own question.

11
Who deposited German fuel drums on a Japanese air base in the Kuril Islands in 1943?

1
What civilisation used wolf pelts for their archers armour?
11
Who deposited German fuel drums on a Japanese air base in the Kuril Islands in 1943?
9
Was the Flakpanzer IV used against infantry? If not, what was?
11
What was Nazi Germany's end goal?
9
Why was the Me262 not suited for a bomber role?
3
What rank was second in command on a U-boat?
16
Did Truman really believe that Hiroshima was a military base?
12
Was Nazi science that involved human experimentation ever actually used for anything?
3
What was the name of the torpedo boat with mechanical problems accompanying the Wilhelm Gustloff?