Did a Jewish King of Narbonne exist?

In today's edition of Le Monde, Marek Halter mentions something about Jewish Kings in Carolingian France, recognized by Charlemagne. Probably using Arthur Zuckerman 'Jewish Kingdom in feudal France' 1972. A quick check on wikipedia says that this theory was rebutted by scholars, including Aryeh Grabois, in his paper 'Le 'roi juif' de Narbonne Annales du Midi 218 (1997), 165–88'. This publication is not available online.

The column of Marek Halter is in a general publication, and therefore has no bibliography. I wondered if anyone knew of a reputable source (available online) to check/disprove this statement.

I am sorry if this is the professional History SE : I'll remove my post if it is. In maths where I belong, we have both a layman maths and a professional maths SE, but I could did not see if there was such a choice in History.

It wasn't a kingdom. The idea is that there existed a Jewish principality in the Frankish realm, led by a Nāśī as vassals of the Carolingian kings. It is mostly advocated by Arthur Zuckerman, as you have noted. His theory has however been widely dismissed by historians in general.

Zuckerman's claim is that the Jews of Septimania aided Pepin the Short in his seven year siege to capture Narbonne from the Muslims. As a reward, the Jews of Narbonne was given extensive lands and privileges, and Makhir, a Babylonian rabbi supposedly from the Royal House of David was installed as their leader. Zuckerman argued that he created a dynasty of Jewish rulers related to the Carolingian kings by blood.

That a Jewish community headed by a Nāśī existed in Narbonne is not very controversial. Zuckerman's identification of those Jewish leaders with other historically recorded nobles of the region is however widely discredited. Specifically, Zuckerman argues that Makhir (the alleged founder of the Jewish dynasty) is the same person as Count Magnario of Narbonne and Aymeri de Narbonne. From that, he argues that Magnario/Aymeri/Theoduric/Makhir fathered Saint Guilhelm of Toulouse, founder the House of Guilhelmides.

The problem is that contemporary records don't support Zuckerman's arguments. In the historical record, Makhir is only mentioned in a 13th century gloss of Abraham ibn Daud's 1161 Book of Traditions. No other source names Makhir at all. His supposed dynasty's continuity from its supposed founding up to ibin Daud's time is totally unrecorded, and there is no way to verify its claim of Davidic lineages. Moreover, it is directly contradicted by the contemporary (with the gloss) Gesta Karoli Magni ad Carcassonam et Narbonam. The Latin text states that the Jews of Narbonne had, when the city was captured from the Muslims in 759, an existing leader of the Davidic line. As opposed to one imported from Babylon by the Franks.

There doesn't seem to be any actual evidence behind Zuckerman's claim that Aymeri was the same as Magnario and Makhir either. His primary evidence is that a certain Magnario was mentioned in Narbonne's 791 charter, the original of which having been long lost. Based on fragmentary facsimiles of engravings that survive in the 1681 De Re Diplomatica, Zuckerman claims the Magnario it mentioned is actually Maghario. According to him, the latter is Makhir in Latin.

That is, he argues the (as most people read it) gn in the word is actually gh. There is however a partial word regna from the same document. Other historians generally took the visual similarity between the two gn's to mean that the one in Magnario is, well, also gn after all. In this they are backed up by Magnario being the Latin of a known Germanic name. The same name, actually, as the significantly better attested Meginarius, notary of Louis the Pious.

Lastly, a note about his claim that Saint William of Toulouse was Jewish. Zuckermans cites as "evidence" Ermold the Black's Poeme sur Louis le Pieux. In that poem, Guilhelm of Toulouse did not fight on the Sabbath. Zuckerman claimed this proved he was Jewish. Most historians thought it was because his army was part Jewish

While Zuckerman's theories are interesting, they don't seem to be based on much in the way of facts. Sometimes the obvious explanations are more convincing than fantastical ideas that predicates upon references to this fabled Jewish dynasty being systematically purged from all historical records.

When you hear hoofbeats, think of horses, not zebras.

A passage from Medieval Jewish Civilization: An Encyclopedia discusses the history and importance of Narbonne as a center for Jewish thought in the western Mediterranean. You can explore this book in more detail on Google Books.

In this book, the following passage discusses Charlemagne’s association with what were known as “The Jewish Kings of Narbonne”: 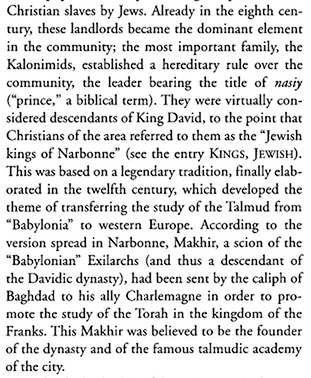 ... Christian slaves by Jews. Already in the eighth century, these landlords became the dominant element in the community; the most important family, the Kalonimids, established a hereditary rule over the community, the leader bearing the title of nasiy (“prince,” a biblical term). They were virtually considered descendants of King David, to the point that Christians of the area referred to them as the “Jewish kings of Narbonne” (see the entry Kings, Jewish). This was based on a legendary tradition, finally elaborated in the twelfth century, which developed the theme of transferring the study of the Talmud from “Babylonia” to Western Europe. According to the version spread in Narbonne, Makhir, a scion of the “Babylonian” Exilarchs (and thus a descendent of the Davidic dynasty), had been sent by the caliph of Baghdad to his ally Charlemagne in order to promote the study of the Torah in the kingdom of the Franks. This Makhir was believed to be the founder of the dynasty and of the famous talmudic academy of the city.

Not the answer you're looking for? Browse other questions tagged france jews early-medieval or ask your own question.

9
What sovereign Jewish polities have existed outside of Palestine?

10
Did Jewish families feel Nazi oppression was exceptional?
4
When was the Yemenite Jewish community isolated from the rest of the Jewish world?
10
Were there Jewish Cossacks in the 17th century?
9
What sovereign Jewish polities have existed outside of Palestine?
3
Did any slaves with Jewish owners ever adopt Judaism?
5
Were some categories of French-Jewish people treated better by Vichy anti-Jewish laws
15
How many Bolsheviks were Jewish?
10
Which king was this?