Why is there a statue of Francis Drake in Coquimbo, Chile?

The English buccaneer Sir Francis Drake had a rather hostile relationship with the Spanish Empire and its colonies, including Chile. As quoted in Wikipedia,

[Francis Drake] sacked the port of Valparaíso [ ] in Chile where he also captured a ship full of Chilean wine.

Now, a bit north of Vaparaíso, in Coquimbo there is a statue of the said pirate towering over the Bay of Coquimbo. I found a blog post stating that the statue has been rededicated to local fishermen but the question remains:

Why was a statue of Francis Drake constructed in Coquimbo (or Chile for that matter) in the first place? And who erected it?

The statue/monument to Drake is modern, and apparently was commissioned by the municipality of Coquimbo sometime in the last 30 years. The nearby City of La Serena was opposed to building a statue to honor a "pirate", but Coquimbo credits him with visiting the bay (there are hundreds of bays/beaches named Herradura in South America - it just means "horseshoe" and refers to the shape of the bay. The bay today is known as Guayacan). Drake came ashore in this spot on his voyage around the world. There was no town at Coquimbo at that time and nothing to sack, so the monument commemorates his feat as a mariner - at least that is the municipality's story. Another corsair, Bartholomew Sharp, did sack La Serena in 1680.

On this page it describes the bay thusly:

The city of Coquimbo is a source of legends of hidden treasures, due to that in the past centuries was assaulted by pirates and corsairs. In the year 1578 the English corsair Francis Drake discovered La Herradura (horse shoe) bay and called this way for its shape. Since that very same moment, the bay became a shelter for pirates and filibusters like Bartolomé Scharp, Eduardo Davis, Jorge Anson and others of minor importance.

If you read Sir Drake's journal at Fordham University: the landing at Coquimbo for provisions is mentioned, as is losing a sailor to the Spaniards. No mention is made of the naming of the bay itself however. (Personal Opinion) The fact that the town continues to use the name given by the English privateer who passed through once, versus a name given by the Spaniards, may be telling to the dislike for the Spaniard conquerors.

Here is a picture of the statue 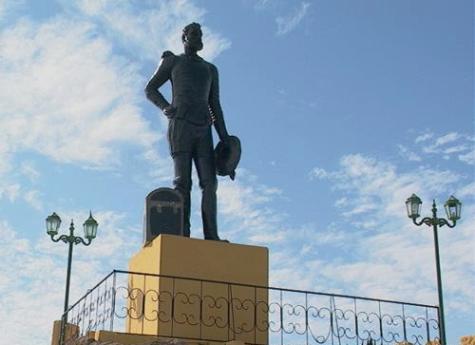 As far as who (paid for) erected it, I can find no source. Unless someone is able to visit the status and read any plaques on or below it, I can't begin to guess.

You can watch and share this video in 4K Coquimbo and the statue dedicated to the British sailors. There are aerial shots of this port city, you will like:

Not the answer you're looking for? Browse other questions tagged piracy navigation chile or ask your own question.

23
Were there ever actual organizations of pirates?
12
Why was there no concerted effort to end the Barbary pirate raids until the 1800's?
6
Why did it take so long for humanity to be able to cross the oceans?
17
Why did Xerxes need a canal across Mount Athos peninsula?
60
Why did Columbus cross the mid-Atlantic instead of exploring from Greenland?
0
Has there been a recorded account of a cabin boy inspiring mutiny on board a ship?
23
Why did piracy thrive in the late 17th and early 18th centuries?
71
Why Were Madagascar and New Zealand Discovered So Late?