How did early farmer societies "know" about protein contents of peas and lentils?

According to Jared Diamond's Guns, Germs and Steel (pp 125-126), the domestication of local grains (e.g. wheat, barley) and pulses (e.g. peas, lentils) lauched food production (farming) societies in many areas. Grain crops have the advantage of being fast-growning, high in carbohydrates and high yield per area cultivated. Their low protein is made up by pulses which are often >25% protein (e.g. soybeans has ~38%). This makes these two types a good combination. The author proceeded to list many parallel combination of grains (or cereals) and pulses in many early farming communities: 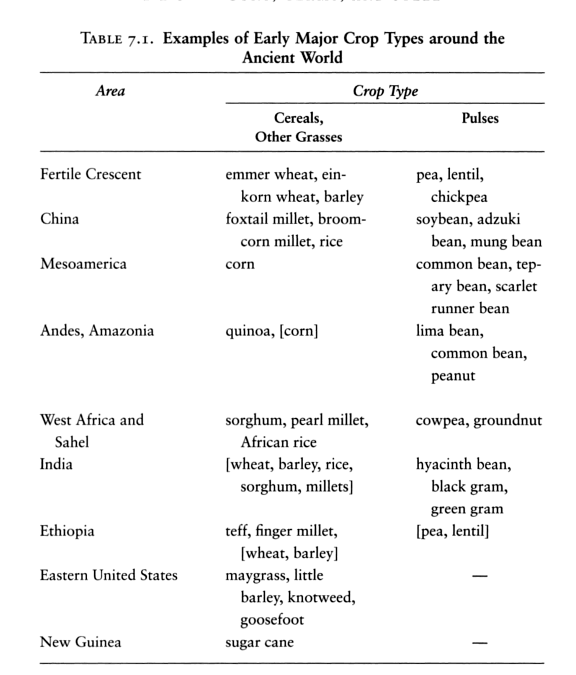 My question is, given their lack of knowledge about biochemistry, how did these societies learn about the advantage of pulses' protein contents and the importance of balanced carbohydrate-protein diet? Or did they unconsciously do it, for example were there some evolutionary/selection process that caused people who consumed balanced diet to survive and produce more offstring? If so, what made this combination invariably "win" in many areas?

What made you think they know about the protein content? Evolutionary pressures would have drove humans to develop instincts for foods that contain the nutrition we need to survive (i.e., cravings). There is also a common human preference for diversity. Those factors alone would have pushed early civilisation into cultivating multiple crops.

Additionally, as MarkC.Wallace points out, societies which adopted a good diet would have been better equipped for success than those who didn't. Now, cultivation of pea and lentil seemed to have begun at the advent of human agriculture in the old world. The evidence points to a tradition of human hunter and gatherers living off food including pulses, before farmer societies came about.

That is to say, those tribes that did not feed off both staple carbohydrates and high protein pulses (and others) was out competed by those who did. As the successful tribes learnt to start growing their food, they would have begun by growing the food they already ate. Hence the farming societies "knowing" about eating pulses.

Summary: we do have evolutionary very old taste receptors that detect proteins, and we probably have rather well regulated protein intake. Knowing that this is protein is not necessary to achieve this.

given their lack of knowledge about biochemistry,

They may not have had our knowledge about biochemistry, but they did have the biochemistry:

and the importance of balanced carbohydrate-protein diet?

That's where the sweet taste receptor comes in, which detects digestible carbohydrates: the amylase enzyme in our saliva splits monosaccharides [sugars] off the starch (carbohydrate). It's closely related to the umami taste receptor. Bitter receptors are also related (and are in fact a whole family of receptors detecting a wide variety of substances).

Incidentally, sweet and umami are two basic tastes that are unambiguously pleasant. That is, they just had to follow their palates, the link protein - advantage is hard-wired in humans.

Salt is pleasant or unpleasant depending on sodium deficiency, bitter unambiguously bad [but we can learn to accept it in order to have other benefits - think coffeine], and sour becomes acceptable only if offset with sufficient sweet; I'm not up to date about fatty acid taste receptor research, but AFAIK, some receptors have been identified.

As for the balance of the diet, in a way that probably didn't matter as much back then as for us Westerners now: until lately most humans experienced hunger and starvation every so often. So the question of balancing a choice between overabundant food types and limiting your food intake was a non-question.
Plus, humans like food diversity, even if they get food that is nutritionally balanced, which would tend to lead to a more balanced diet.

Or did they unconsciously do it, for example

Probably mostly unconsciously. But I would not bet that the idea pulses should be mixed into the grains was never expressed: I've met what I consider an example of specific appetite for protein, and know of others that they did make the experience that "protein really helps" in the context of long distance hiking. Similarly, without the name protein it's just possible that someone somewhere vocalized the impression that grains + pulses are better than just grains.

It has been demonstrated that rats have an innate specific appetite for protein that kicks in in case of protein deficiency or high protein need (pregnant rats)(see wiki page linked above for source). In humans, there are also indications that protein intake is actually important for the regulation of overall food intake, and takes (to a certain extent) precedence over energy intake (protein leverage hypothesis) [Gosby et al.: Testing Protein Leverage in Lean Humans: A Randomised Controlled Experimental Study, PLOS One, 2011].

Again, this hints at a situation where pulses may have been highly valued right from the beginning - at least where meat, fish and eggs were scarce, and milk for adults was not yet an option. If high-protein sources are available, then of course, additional carboyhdrates without much protein is fine. Keep in mind that very roughly speaking at the same time (after all, domestication of the first grains wasn't something that happened in just a few years, we're talking about a period of a few 1000 years), not only agriculture started but also domestication of goat, sheep, cattle, chickens.

Also, the protein leverage hypothesis (and the fact that this hypothesis is just under study more or less now instead of being centuries-old wisdom that has been subjected to rigorous study decades ago) may point to this important regulation of protein intake being not so easy to detect during "real life nutrition situations". Which would make a conscious decision to work towards farming pulses as well as grains unlikely.

were there some evolutionary/selection process that caused people who consumed balanced diet to survive and produce more offstring?

Yes, and that evolutional/selection pressure is happening since far longer than the "groups of people"/"societies" that @MarcCWallace and @Semaphore write about:

We share the T1R taste receptor family not only with mammals but with vertebrates in general. And, as this question is mainly about protein, there is indication that the sweet receptors are variants of the (older) umami receptors. Yarmolinsky et al.: Common Sense about Taste: From Mammals to Insects, Cell, 2009. Older here is sometime between when fish decided to take over land and before mammals evolved!

(Note that this means we have the ability to detect protein since long before we became humans, but that doesn't necessarily mean that protein precedence and craving for variation are as old: they could be driven by occupying our ecological niche more recently. Still, my personal guess is that the importance of protein is also old.)

A detail worth considering is that high-protein pulse crops also happen to be nitrogen-fixing. In other words, higher protein crops would have also improved the quality of the soil. Growing them together with cereals would have noticeably increased productivity, even if the nutritional benefits were less obvious.

Not the answer you're looking for? Browse other questions tagged ancient-history agriculture nutrition or ask your own question.

14
How many hours per day did a Sumerian farmer sleep?
16
How did societies adapt to using alcohol to make water safer?
5
How early did restrictions on hunting start?
6
What do written sources say about disability in early civilisations?
5
What is known about early history of Judaism?
28
Did the Romans know about China?
5
Did starvation or malnutrition occur in indigenous American societies?
2
What do we know about Archimedes text "On Sphere-Making"?
9
Did ancient or medieval people know about underground rivers/lakes?
8
Are there sources that record ancient women in patriarchal societies' thoughts about patriarchy?